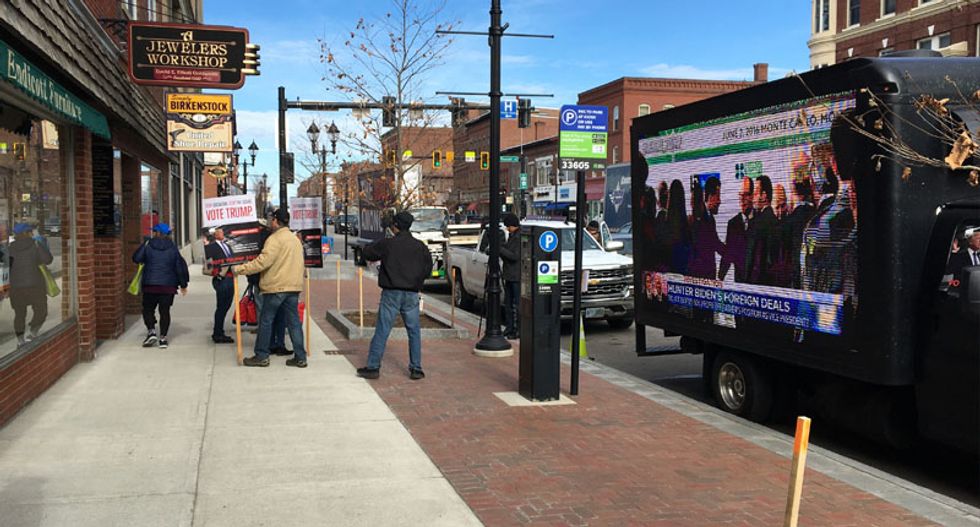 The Trump truck was parked last Wednesday morning on Main Street in Concord, the state’s capital, outside a theater hosting the NH Youth Climate and Clean Energy Town Hall. News footage of presidential candidates including Elizabeth Warren flashed on the truck’s sides, but most of the clips focused on Joe Biden, including vintage clips of the former vice-president addressing the plagiarism scandal credited with knocking him out of the 1988 presidential race. Seven Trump supporters gathered around the truck, waving Trump signs.

“Investigation: Hunter Biden’s Foreign Deals,” read the banner from an ABC News clip playing on the black truck’s sides—hours before the Senate acquitted Trump on two impeachment articles, including the abuse of power charge involving Ukraine, Joe Biden, and his son.

The truck belonged to a pro-Trump PAC, the Committee to Defend the President.

“We’re outside of the Democrats’ ‘climate change’ event in Concord today offering up free hamburgers,” the PAC’s Twitter feed, @Defend_Trump, said this morning.

“As so often, he has figured out the wrong thing to do and then doubled down on it,” Weld said of Trump. “If he keeps his platform to one word, hoax, then he doesn’t have to build up any solid base of knowledge about the issue.”

Outside the theater around lunchtime, a Trump supporter announced the offer of free hamburgers—prompting a shouting match between him and a bullhorn-wielding supporter of perennial presidential candidate Vermin Supreme, with members of the New Hampshire Sierra Club, holding “Vote for our future: act on climate” signs, caught in the middle.

Donna Sellers of Bristol, New Hampshire, who joined the pro-Trump protesters with her 12-year-old daughter, expressed disinterest in climate change.

“I don’t really feel it should be that big an issue,” Sellers said. Environmentalists in the U.S. should “confront China” about its carbon emissions, she said, and the federal government should seek to curb carbon emissions with incentives, not punishment.

The Committee to Defend the President has spent more than $4 million in the 2020 election cycle as of late October, on projects including a drive to register pro-Trump voters. It began as an anti-Hillary Clinton PAC in 2013. Within minutes of US Sen. Mitt Romney’s announcement today that he would vote to convict Trump of abuse of power, the PAC posted a Facebook message calling him a “RINO” and demanding his resignation.

This article was produced by the Boston Institute for Nonprofit Journalism as part of its Manchester Divided coverage of political activity around New Hampshire’s first-in-the-nation primary. Follow our coverage @BINJreports on Twitter and at binjonline.org/manchesterdivided, and if you want to see more citizens agenda-driven reporting you can contribute at givetobinj.org.