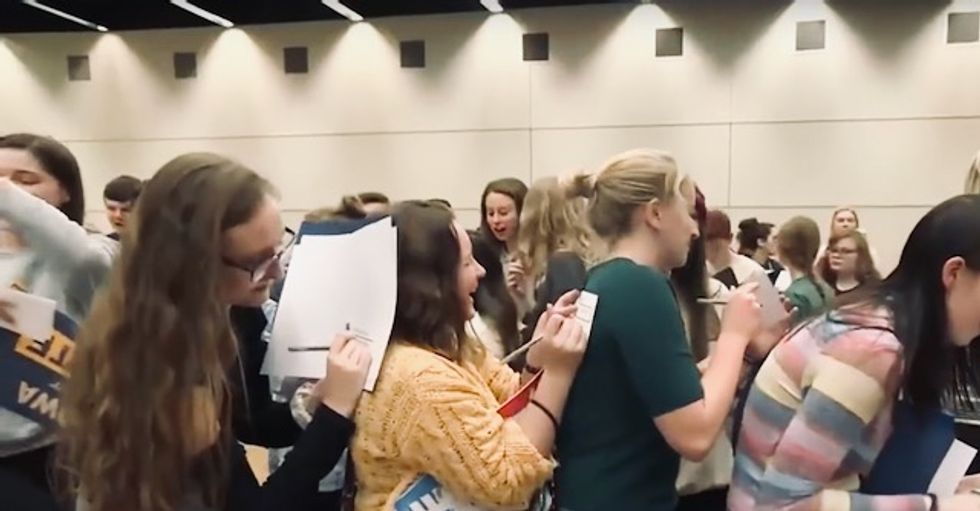 "It is genuinely scandalous that the Iowa Democratic Party has only released 75% of the results to the caucus."

"The stuff of banana republics."

That's just a sampling of the anger progressives voiced this week over the Iowa State Democratic Party's handling of the first-in-the-nation presidential caucus as the full results remain a mystery nearly 48 hours after the electoral process was thrown into chaos by a secretive, hastily developed, and untested mobile app.

As of Wednesday afternoon, 25% of the results of the Iowa caucus were still unreported, leading many to question the state Democratic Party's intentions in trickling out partial vote counts over a period of days.

"At this point, that's adding insult to injury," The Nation's John Nichols wrote Wednesday. "Why, after screwing everything up when it mattered most, would the Iowa Democratic Party release part of the count? Why not get the count completed and release it when everything is in order?"

"The answer," wrote Nichols, "is that they are trying to ease their embarrassment by playing a dangerous game that they hope will satisfy the media. It won't... Now, the party needs to stop playing games and announcing partial results and get it done right."

I am absolutely baffled why they wouldn't just wait until they had the whole thing tallied before announcing. an ut… https://t.co/98u7sC3FgA
— ryan cooper (@ryan cooper) 1580854150.0

Somebody help me out. What is it called when party elites selectively release results creating a grand media narrat… https://t.co/EVUt1bN4nz
— Krystal Ball (@Krystal Ball) 1580860705.0

Pete Buttigieg and Sen. Bernie Sanders (I-Vt.) remain locked in a razor-close battle for first place, with Sanders leading in the popular vote and Buttigieg—who faced criticism for taking a premature victory lap Monday night—is ahead in state delegate equivalents.

"I assume that one of these years, that vote count will be completed," Sanders told reporters Wednesday.

The release of just 4% more of the vote total only fueled the outrage.

"I like how they are dribbling these out in smaller and smaller portions," tweeted The Nation's Jeet Heer. "First 61%, then another 10%, now another 4%. At this rate, the final results will not be known even at the end of time."

"It is genuinely scandalous that the Iowa Democratic Party has only released 75% of the results to the caucus," added HuffPost reporter Zach Carter.

Nichols and other progressive commentators warned that the Iowa fiasco—which was gleefully seized upon by President Donald Trump and Senate Majority Leader Mitch McConnell (R-Ky.)—could reverberate across the U.S. and severely damage the eventual Democratic nominee's chances in the November general election.

"This is about more than bruised egos," wrote Nichols. "This is about the possibility that the headlines and not the actual delegate count will carry weight into the next primaries and caucuses and warp the race for the presidency."

New York magazine's Eric Levitz on Tuesday described the Iowa caucus as a "marathon infomercial" for the Democratic Party's "own administrative incompetence and internecine enmity."

"Democrats have already humiliated their party on national television, alienated their least reliable progressive supporters, demoralized their most earnest activists, and handed Trump's campaign a variety of potent lines of attack," wrote Levitz. "It's early. There's plenty of time for the party to get itself together. But for the moment, Donald Trump is winning the 2020 Democratic primary."

Jim Messina, who managed former President Barack Obama's 2012 reelection campaign, suggested in an interview on MSNBC Wednesday that Democrats should simply move on from Iowa.

"This election is going to be incredibly close-right now, passions of the Democratic Party are running at all-time high," Messina said. "We ought to put Iowa behind us."

Progressives quickly rejected the call to sweep the Iowa disaster under the rug.

"I'm seeing party elites saying we should 'move on,' but some of the best volunteers and staff in the world worked their asses off for months on end," tweeted activist Shaun King, a vocal Sanders supporter. "We can't move on."