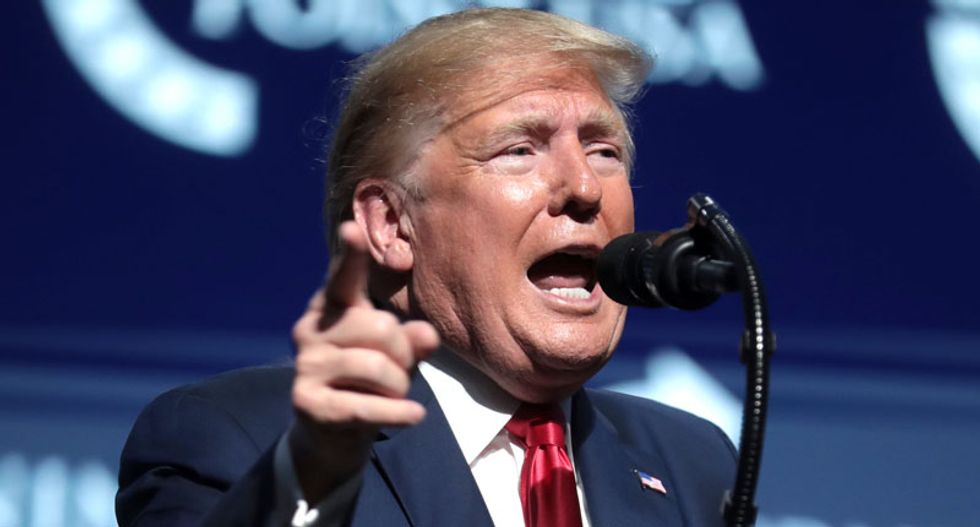 The day after his acquittal by the Republican Party in a trial that banned witnesses, the unhinged Donald Trump gloated for over an hour on all the television networks. Trump flattered his courtiers, one by one, and fulminated against his Congressional adversaries, Hillary Clinton and ex-FBI chief James Comey.

Donald Trump’s speech degraded his office for the ages. Trump lied about himself and others and received applause from the assembled sycophants. The morning of his speech, Trump attended a prayer breakfast. Trump never goes to church to atone for his habitual, career-long violations of seven of the Ten Commandments. His hypocrisy has no bounds.

Tightening his dictatorial grip on the U.S. government, Trump pledged to destroy his opponents— from Nancy Pelosi to Adam Schiff to the “radical, socialist Democrats.” These shameful threats cannot be taken lightly. Never forget Trump saying “I have an Article II, where I have the right to do whatever I want as President.”

The egomaniacal Trump is inebriated with his disgraceful acquittal, convinced of his own innocence, despite the clear evidence of his guilt. No apologies, no remorse, since he never does “anything wrong.” Trump’s petulant actions could make him an object of abject pity were he not in a position to start wars, shred the Constitution, repeal life-saving regulations, and turn the U.S. government over to avaricious giant corporations. In politics, the tactical question between the contestants is who is on the offensive and who is on the defensive. Trump knows this in his gut.

How do the Democrats regroup? Nancy Pelosi did not send a broad array of impeachable offenses to the Senate – some with clear ‘kitchen table’ appeal. Sending just the articles dealing with abuse of power and obstruction of Congress stemming from the Ukraine extortion assured a Republican kangaroo court acquittal. Early polls don’t indicate the imperfect trial diminishing his public support. What Democrats have going for them is the certainty that Trump will continue to commit daily impeachable offenses, including defying Congressional subpoenas. Despite these daily offenses, Trump continues to mock the Democrats. He is practically begging them to pursue a second round of impeachment charges. They should do so just to defend the critical checks and balances required by the Constitution.

Trump’s actions are a departure from those of Bill Clinton. After his Senate acquittal, Clinton spoke for only two minutes on television and he used his time to express regret and apologize. Trump exploded with rage, vindictiveness, and plans for revenge. His unseemly outburst at the annual National Prayer Breakfast smashed all precedent.

After acquittal, Washington Post columnist Dana Milbank wrote: “He described his political opponents as ‘bad,’ ‘dirty,’ ‘horrible,’ ‘evil,’ ‘sick,’ ‘corrupt,’ ‘scum,’ ‘leakers,’ ‘liars,’ ‘vicious,’ ‘mean,’ ‘lowlife,’ ‘non-people,’ ‘stone-cold crazy,’ and ‘The crookedest, most dishonest, dirtiest people I’ve ever seen.’” Mostly, the exact description of the person he sees in the mirror. Conservative columnist Michael Gerson warned further: “…we are reaching a very dangerous moment in our national life. The president is seized by rage and resentment…for all to see and hear. He now feels unchecked and uncheckable. And he has a position of tremendous power. That is what happens when a sociopath gets away with something.”

Another columnist, Catherine Rampell, lists past vengeful uses of his power to twist procurement contracts and antitrust enforcement decision against his enemies. She calls it “weaponizing the presidency.”

For example, Trump doesn’t like CNN so he ordered the Justice Department to challenge the AT&T merger with Time Warner in court (unsuccessfully).

The White House has refused to give Congress documents that could reveal whether Trump intervened for personal political advantage. Congress is the only institution that has the authority given to it by the Founders to thwart a fast-emerging monarch.

Defying Congressional subpoenas is a slam dunk impeachable offense. No resort to the courts is required. Congress has plenary power to enforce its subpoenas. When Trump ignores Congress’s constitutional authority, all other powers of Congress are debilitated. These include the powers to spend, tax, declare war, confirm nominees and, of course, to check a runaway executive branch under a dictatorial, seriously unstable, chronically lying President.

Under “Moscow Mitch” McConnell, the Senate has been shut down. The only time the Senate takes any action is when it acts like Trump’s lapdog. Senator McConnell is sitting on over 300 bills passed by the House, including legislation that would protect our elections from foreign interference. (For more information see, https://ditchmitchfund.com/).

That leaves the House of Representatives, which Trump promises to punish. What Speaker Nancy Pelosi must now do is to assemble her more than willing Committee Chairs and collect all the existing disregarded House subpoenas and continue their existing investigations which, stonewalled by Trump, will require more subpoenas.

Before he resigned, Nixon was about to be impeached, in part, for defying one subpoena. Trump’s holds the presidential record tearing up subpoenas for witnesses and documents.

He has raised the stakes as to whether the Congress as the central institution of our government will survive his executive branch shredding of the Constitution.

Given what they said, wrote, and placed into the Constitution, the number one concern of Thomas Jefferson, James Madison, George Mason, Benjamin Franklin and George Washington, was to prevent another King George III – a monarch in practice if not in name. They implemented this priority by placing the most powerful authorities by far in the Congress.

Trump is daring the House of Representatives to challenge his outlawry and abdicate the constitutional obligation to impose “checks and balances” on the Executive branch. An article of impeachment regarding mass subpoena defiance needs no witnesses, is clear-cut, and can be approved in less than a day and sent to the Senate. Then the people can see whether McConnell will say that the people need volumes of information about Trump corruptly destroying their health, safety and economic protections and turning our government over to Wall Street.

Kitchen table issues are everywhere behind those subpoenas by ongoing House Committee investigations. The spreading “Ditch Mitch” movement in Kentucky will be watching Senator McConnell.