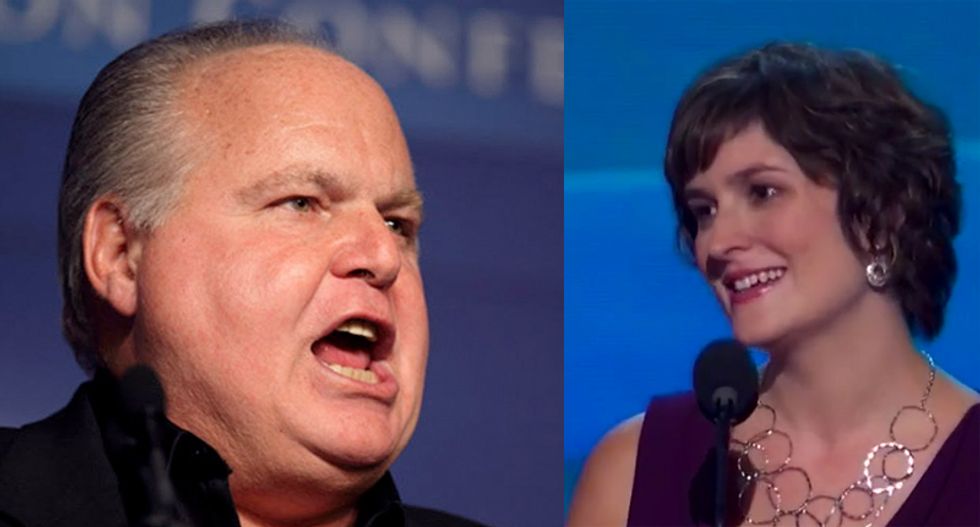 If the planet manages to survive the stupidity of its dominant species, future generations will look back in astonishment on the fact that American businesses paid tens of millions of dollars each year to a swinish, cigar-smoking hatemonger who spewed stupidity, misogyny, racism, and fear to a coast-to-coast radio audience of troglodytes who prided themselves on being Dittoheads, unable to think for themselves, and perfectly content to let Rush "think" for them.

This article first appeared in 2014.

I decided to round up a sampling of Limbaugh's views on women. What I found wasn't pretty.

For instance, here's Rush imagining that women secretly want to be sexually harassed. "The sexual harassment crowd," he said. "They're out there protesting what they actually wish would happen to them."

And here he is, comparing women to cats. "My cat comes to me when she wants to be fed. She's smart enough to know she can't feed herself. She gets loved. She gets adoration. She gets petted. And she doesn't have to do anything for it, which is why I say this cat's taught me more about women than anything in my whole life."

Here he is, explaining feminism. "Feminism was established so as to allow unattractive women easier access to the mainstream of society."

And here Limbaugh laments the vicious double standard that oppresses male politicians. "Female politicians get a pass on every aspect of their appearance," he said. "There are plenty of lard-ass women in politics, and they get a total pass on it."

Limbaugh, however, wasn't above putting a knock on the appearance of a presidential daughter. "Socks is the White House cat," Rush intoned nearly two decades ago, "but did you know there is also a White House dog?" And then he held up a picture of 13-year-old Chelsea Clinton.

Here's Limbaugh, setting his kinky conditions for women to receive government subsidized birth control. "If we are going to pay for your contraceptives," Rush decreed, "and thus pay for you to have sex, we want you to post the videos online so we can all watch."

And speaking of watching, here's ol' Loathsome expressing his love of ogling: "I love the women's movement — especially when walking behind it."

Rush defines a "feminazi as "a woman to whom the most important thing in life is seeing to it that as many abortions as possible are performed."

Limbaugh's on his fourth wife, but would any woman ever have married this pig if he weren't stinkin' rich? And if you're married to a guy who loves Limbaugh, I offer sincerest sympathies.