Sally Yates: Trump is transforming the DOJ into his 'personal grudge squad' 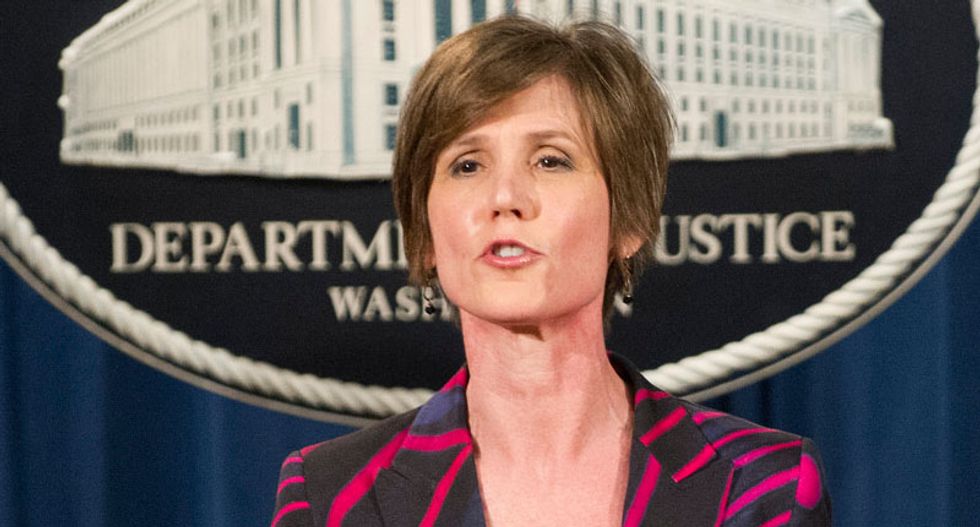 Former deputy Attorney General Sally Yates has written a scathing column for the Washington Post in which she outlines all the ways that President Donald Trump has corrupted the United States Department of Justice in his quest to transform it into what she describes as his "personal grudge squad."

In her op-ed, Yates argues that the president's constant tweeting about the DOJ has undermined its independence, as attorneys there might decide to make prosecutorial decisions based on whether or not they think the president would approve.

The most obvious recent example of this came when Attorney General Bill Barr intervened to reduce the sentencing guidelines for Trump ally Roger Stone. In fact, Trump continued attacking the DOJ and its employees even after he got what he wanted from Barr.

"After the four prosecutors resigned from the Stone case, Trump viciously attacked them, took a swing at the sentencing judge (perhaps laying the groundwork for a pardon), accused former special counsel Bob Mueller of committing perjury and then congratulated the attorney general for 'taking charge of a case that was totally out of control,'" Yates writes.

The Stone case is far from the only disturbing incident to occur under Barr's leadership, however.

As Yates writes, "it followed a disturbing trend that includes: a four-page memorandum distorting the findings of the Mueller investigation and gratuitously absolving the president of obstruction of justice; a public rejection of the Justice Department inspector general’s findings regarding the propriety of opening the Russia investigation; repeated echoing of the president’s politically charged rhetoric undermining law enforcement and the intelligence community; and the president’s personal lawyer being set up with a special avenue to funnel dirt to the department about the president’s political rival."