Sanders argues Medicare for All is vital for union workers: 'They're losing wage increases because cost of healthcare is soaring' 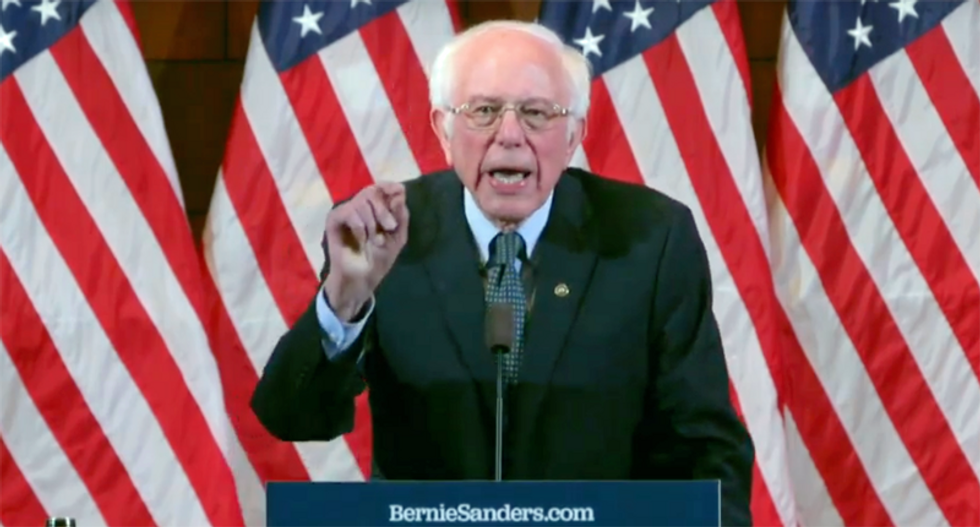 "If you talk to union negotiators, they will tell you they spend half of their time arguing against cutbacks for the healthcare that they have."

Responding to the powerful Nevada Culinary Workers Union's criticism of Medicare for All in new fliers—a critique that was readily seized upon by some 2020 Democrats—Sen. Bernie Sanders on Wednesday night made the case for why achieving single-payer is so vital for union workers and everyone else in the United States.

"Many, many unions throughout this country—including some in Unite Here, and the Culinary Union is part of Unite Here—absolutely understand that we've got to move to Medicare for All," Sanders, a 2020 Democratic presidential candidate, said in an appearance on MSNBC. "And the reason is, if you talk to union negotiators, they will tell you they spend half of their time arguing against cutbacks for the healthcare that they have."

"They're losing wage increases because the cost of healthcare is soaring," Sanders continued. "When everybody in America has comprehensive healthcare, and when we join the rest of the industrialized world by guaranteeing healthcare to all people, unions can then negotiate for higher wages, better working conditions, better pensions. So I think the future for unions is through Medicare for All."

Asked by MSNBC host Chris Hayes to respond to 2020 rival Pete Buttigieg's tweet Wednesday "piggybacking" on the Culinary Workers Union's criticism of Medicare for All, Sanders said, "My response is that I have a lot more union support than Pete Buttigieg has or I think ever will have."

The Culinary Union—a powerful political force in Nevada, which holds its Democratic presidential caucus on Feb. 22—echoed the common criticism that Medicare for All would "end" union healthcare in its new flyers. The union doubled down on the criticism in the face of backlash, claiming Medicare for All would "take away the system of care we have built over eight decades."

Union leaders and members supporting Medicare for All have repeatedly pushed back against that line of attack. "I really resent the 16 million workers who joined together and bargained for better health plans being pitted against millions of Americans struggling to get healthcare coverage," Service Employees International Union (SEIU) president Mary Kay Henry said last August.

According to Labor for Single Payer, 19 unions representing nearly 10 million workers across the U.S. have endorsed Rep. Pramila Jayapal's (D-Wash.) Medicare for All Act of 2019.

In response to Buttigieg's tweet Wednesday touting his own "Medicare for All Who Want It" public option plan, Sara Nelson, president of the Association of Flight Attendants, accused the former South Bend, Indiana mayor of "perpetuating" a "gross myth."

"Not every union member has union healthcare plans that protect them," Nelson tweeted. "Those that do have it, have to fight like hell to keep it. If you believe in labor then you’d understand an injury to one is an injury to all."

This is offensive and dangerous. Stop perpetuating this gross myth. Not every union member has union healthcare pla… https://t.co/aD071MFNzj
— Sara Nelson (@Sara Nelson)1581524999.0

As HuffPost's Dave Jamieson reported Wednesday, "the Culinary membership itself is almost certainly divided on the issue" of Medicare for All, which would virtually eliminate private insurance and provide comprehensive care to everyone in the United States for free at the point of service.

Sanders' proposal would require that company savings from Medicare for All be used to increase workers' wages and pension benefits.

"Sanders faced some tough questions on Medicare for All and some heckling when he spoke before union members in Las Vegas in December," Jamieson noted. "But the Las Vegas Review Journal reported that he otherwise enjoyed an 'enthusiastic reception,' with the crowd 'firmly behind Sanders' and chanting 'Bernie! Bernie!' at times."

The Culinary Union has not yet endorsed a 2020 presidential candidate.

Sal Rosselli, president of the National Union of Healthcare Workers, which endorsed Sanders and Sen. Elizabeth Warren (D-Mass.), told HuffPost that "over the years members sacrificed wage and other economic increases to achieve employer paid healthcare for them and their families—now every contract cycle is a fight to maintain it."

"Medicare for All would take healthcare off the bargaining table so improvements could be made to pensions, wages, training, child/elder care, and other economic issues," said Rosselli.

After a four-month-long investigation into who carved a QAnon slogan into a 4,000-year-old New Hampshire landmark, authorities have arrested a New Jersey man, Patch reports.

With the news cycle as nuts as it is — the constant pandemic news, the ongoing fallout from the Capitol insurrection, conservatives pretending to believe Dr. Seuss was "canceled" — it likely passed many people's attention that the Supreme Court listened to arguments Tuesday that may signal the end of voting rights as we know them.

On the surface, Brnovich v. Democratic National Committee and Arizona Republican Party v. Democratic National Committee may not seem like a big deal. The cases address partisan fights over rules in Arizona disallowing third party ballot collection and requiring ballots cast in the wrong precinct to be thrown out entirely, regulations that don't seem, on their surface, like earth-shattering assaults on the ability of most voters to cast ballots. But voting rights experts fear that the particulars of the Arizona restrictions are not really what's at stake in the case, which is likely to be ruled on this summer.