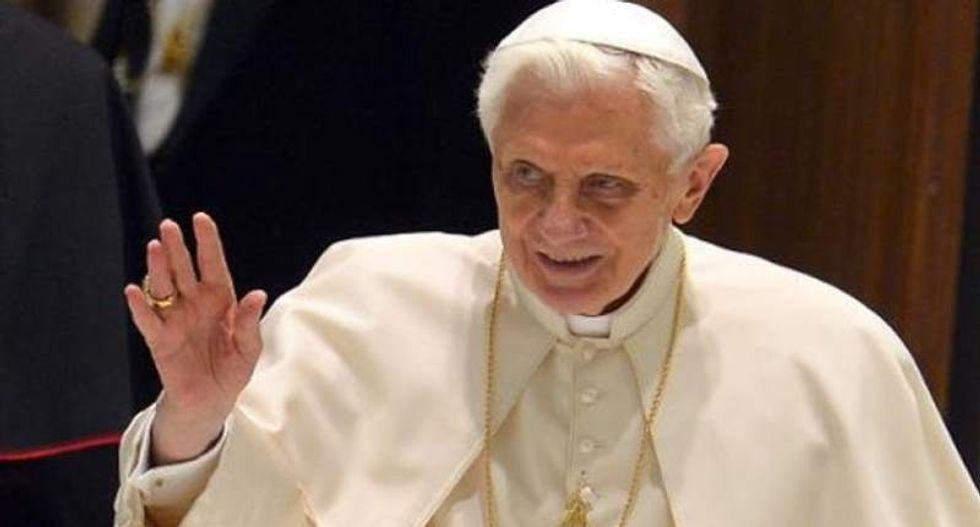 Seven years after his surprise resignation, Benedict XVI — weakened by age but still intellectually spry — appears unable to remain in the shadow of his Argentinean successor Francis, creating the appearance of “two popes” at odds.

On February 11, 2013, at the age of 85, the German intellectual Joseph Ratzinger announced in Latin to astonished cardinals that he would cease being pope, a situation unheard of for seven centuries.

For five years, the unusual cohabitation in the smallest state in the world between the 265th pope in retirement and the 266th, Francis, went on without a hitch.

But as the “emeritus” Pope Benedict XVI, a learned theologian, continued in his retirement to write on the great themes of the Church, friction has arisen, most recently over the topic of married priests.

On Wednesday, Francis will unveil his stance on priestly marriage after a synod of Amazonian bishops recommended in October that the priesthood be opened to married indigenous people. Some say this exception would solve the problem of a lack of priests in remote areas of the Amazon.

The Vatican insists that Francis’s position was already decided in December, before the publication in January of a book castigating the synod conclusions and defending the celibacy of priests, co-signed by Benedict XVI and the ultra-traditionalist Guinean Cardinal Robert Sarah.

Some Vatican observers say Francis was strongly irritated by the publication, which caused shockwaves when excerpts were first published by Le Figaro newspaper.

Through his private secretary, the German archbishop Georg Gaenswein, Benedict tried to backtrack on the publication, explaining that he had never approved a co-authored book project. But the damage had been done, with the former pope weighing in on the importance of priestly celibacy ahead of his successor’s pronouncement on the subject.

Benedict also ruffled feathers in April 2019, when in a long text he blamed paedophilia within the church on the 1960s sexual revolution and an absence of God in modern society.

Francis has said the problems stem from within the church itself, and has criticised “clericalism,” or how a sense of priestly superiority has caused the clergy to become remote from the faithful.

Gaenswein, whose duties included organising Francis’ audiences, has not been seen at the side of the current pope since the publication of the book. The prelate appears to have been sidelined and invited to spend more time taking care of the retired Pope.

– ‘His strength has weakened’ –

A Bavarian television documentary in January revealed a frail Benedict, in a wheelchair, speaking with a faint voice. The former pope no longer celebrates mass himself in his monastery within the Vatican gardens, decorated with family photos and Bavarian souvenirs.

The former pope — who has given himself the title of “emeritus” pope — has now substituted monk’s sandals for his red mules of the past, but he continues to wear a white cassock within the Vatican walls.

Gaenswein, who lives with Benedict in the same monastery, is quoted in the documentary as saying: “You can see when he walks that his strength has weakened.”

Three years ago, Gaenswein explained the “two pope” phenomenon: “There are not two popes, but a de facto expanded ministry, with one active and one contemplative member”.

Such statements have fuelled a traditionalist fringe within the Vatican which considers Francis illegitimate and interprets all writings of Benedict as criticism of his successor.

But last week, the second most powerful person in the Vatican, Cardinal Pietro Parolin sought to put the affair to rest, saying Francis was the one and only pope.

“Let’s stop talking about two sovereign pontiffs, because there is only one pope, the one who is invested with papal authority, that is, Francis,” Parolin said.

Francis too tried to stamp out any ambiguity in 2016, saying Benedict was “a pope emeritus and not the second pope,” comparing his 10-year-old elder to “a grandfather at home”.

Still, popular culture has run with the idea.

“The Two Popes,” a film by Brazilian director Fernando Meirelles, imagines an oratorical joust between an authoritarian German pope played by Anthony Hopkins and a future Argentine pope, played by Jonathan Pryce, who likes to watch soccer and who wants to teach the pope to tango.

A pair of students are no longer enrolled at a Tennessee boarding school following the emergence of a shocking racist video, reported Local 3 News on Wednesday.

"A spokesperson for McCallie School says the two students who posted the video with racial slurs to Snapchat are no longer enrolled at the school," reported Liam Collins. "'The young men felt that it was acceptable to say what they said,' said Rev. Ann Pierre, the president of the Chattanooga-Hamilton County branch of the NAACP. 'So that tells me that this is not the first time.'"