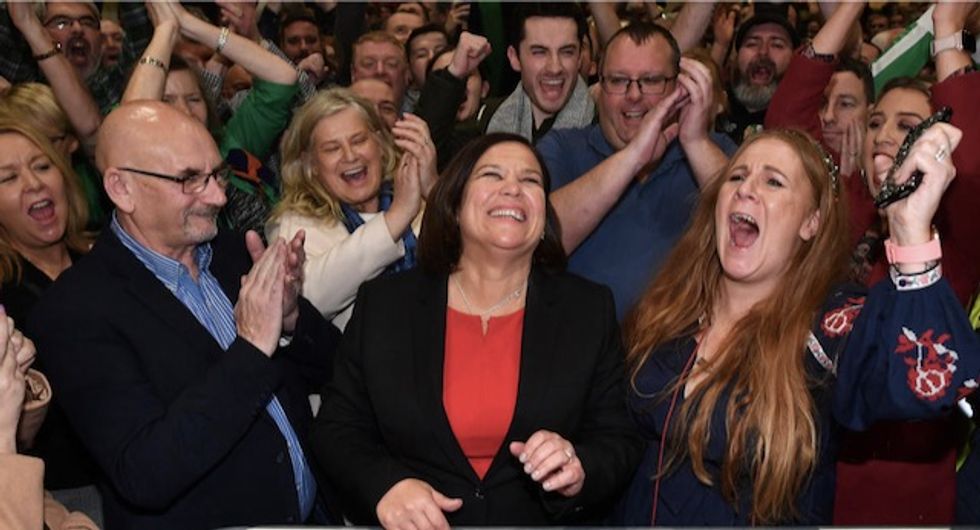 Sinn Fein on Tuesday became Ireland's second largest parliamentary party after winning the popular vote in a weekend election -- shattering the political landscape and thrusting the one-time fringe party with historic links to paramilitaries into a likely role in the next government.

With counting completed in the early hours of Tuesday Sinn Fein had taken 37 of the 160 seats in the next Dail -- Ireland's lower house of parliament -- after a 62.9 per cent turnout in Saturday's election.

Centre-right party Fianna Fail were only one ahead on 38 whilst Prime Minister Leo Varadkar's Fine Gael party took 35, a result likely to topple the premier from office.

If a new government is to be formed when the Dail sits on 20 February it must contain multiple parties.

Negotiations have already begun, with Sinn Fein arguing for a central role in power after winning 24.5 percent of first preferences in Ireland's single transferable vote system -- the largest of any party.

Saturday's ballot has broken the stranglehold of two-party politics in Ireland by introducing a new contender in the mainstream -- the nationalist Sinn Fein party once shunned because of its links to IRA paramilitaries.

Former leader Gerry Adams and other party representatives were even banned from the airwaves in the UK as violence raged over British rule in Northern Ireland over three decades to 1998.

But with two decades of peace and a new leader under Mary Lou McDonald, Sinn Fein's left-wing policies on tackling crises in housing and health found favour with voters.

McDonald said the two main parties -- Fine Gael and Fianna Fail -- were "in a state of denial" and had not listened to the voice of the people.

On a walkabout in Dublin on Monday she said she had begun talks with smaller left-wing parties to try to "test" whether it was possible to form a government without the two centre-right parties.

"I may well be the next taoiseach (prime minister)," she said before chatting to supporters and market traders.

AFP/File / Bryan MEADE Prime Minister Leo Varadkar has been seen as the face of a new, more progressive Ireland

Prime Minister and Fine Gael leader Leo Varadkar acknowledged the shift to "a three-party system" on Sunday and said talks between the parties could be protracted and difficult.

"The Irish political system has to react to it and probably accept that Sinn Fein will be part of the next government," Eoin O'Malley, associate professor at Dublin City University, told AFP.

Tuesday's result was all the more striking because Sinn Fein ran just 42 candidates.

Analysts suggest the party may have been taken by surprise by its surge in popularity, and would likely be the largest party if it had put forward a larger slate.

Fine Gael and Fianna Fail have both ruled out any deal with Sinn Fein because of its past associations under Adams, who has long denied allegations he had a leadership role in the IRA.

"The Troubles" saw the IRA wage a campaign against unionist counterparts and British security forces over UK-rule in Northern Ireland that saw more than 3,000 killed on all sides.

McDonald's policies on tackling wealth inequality and housing shortages appear to have appealed to younger voters in the EU member state's 3.3 million-strong electorate.

Dublin coffee shop manager Darren Hart said it was time for another party to try after decades of two-party dominance.

"Whether they have a troubled past as a party or not, you know they deserve a shot, same as everybody else, so why not?" he said.

In a sign of the sea-change in Irish politics, Varadkar himself was beaten to the first seat in his constituency by a Sinn Fein candidate on Sunday.

He took the second of four seats but it was a sharp symbolic blow on a long night for the premier, who was facing the electorate for the first time as prime minister.

Varadkar -- young, openly gay and mixed-race -- has been seen as the face of a new, more progressive Ireland after referendums overturning strict abortion laws and same-sex marriage.

Steve Bannon attacks McCarthy over security for State of Union: 'They've got the fence back up'

On the eve of Biden's speech, Bannon complained that McCarthy had reinstated some of the security that was put in place after the attack on Jan. 6, 2021.