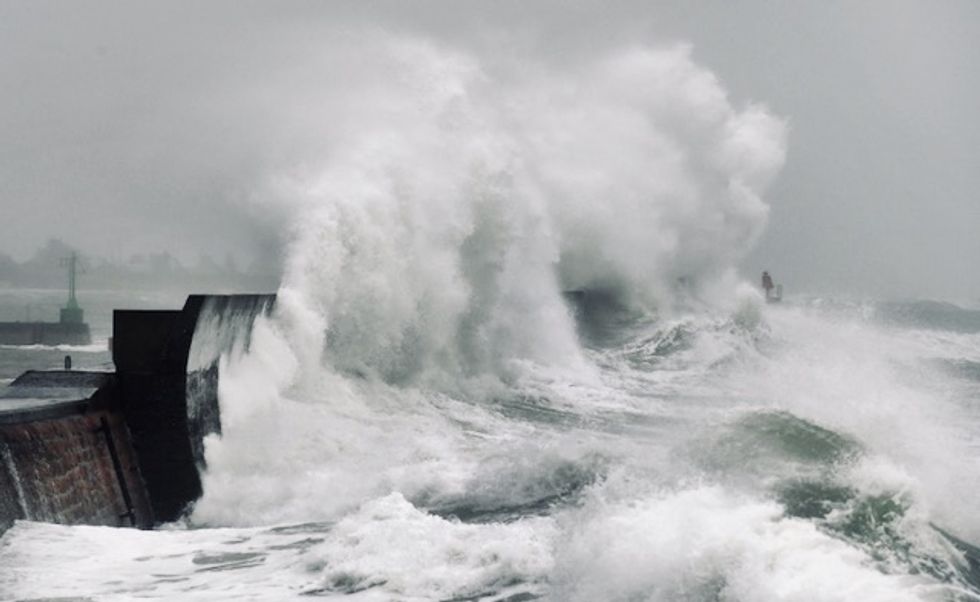 Storm Ciara caused travel chaos on Monday, severely disrupting commutes and grounding hundreds of flights as swathes of Europe were left without power by torrential rain and winds of up to 180 kilometres (110 miles) per hour that also caused flash flooding and the cancellation of sporting fixtures.

In one of the most violent storms for years, one man died and another was reported missing in southern Sweden when their boat capsized, while three people were seriously injured in Germany by falling trees and branches.

Parts of northern France were put on orange alert and 130,000 homes had electricity cut off.

The Netherlands closed one of its big storm surge barriers as the tempest approached on Sunday night. Police said it caused Monday morning traffic jams over 600 kilometres of roads.

Around 220 flights were cancelled during the morning at Amsterdam's Schiphol airport -- Europe's third-busiest -- most destined for other European cities. Around 240 never took off on Sunday.

Another man was injured by a tree in the Czech Republic, where winds reached up to 180 kph on the country's highest mountain, Snezka. The storm left 100,000 without power there and even toppled over a truck.

Tiny Luxembourg cancelled school classes and morning rush hour traffic ground to a halt in Brussels due to street closures and flooding.

Britain began a clean-up after bearing the brunt of one of the most of violent and destructive storms in years.

"While Storm Ciara is clearing away, that doesn't mean we're entering a quieter period of weather," Met Office meteorologist Alex Burkill warned. "Blizzards aren't out of the question".

Transport was disrupted across the country with planes and trains cancelled or delayed.

The highest wind speed recorded was 150 kilometres per hour (93 mph) in the northwest Welsh village of Aberdaron.

The West Yorkshire towns of Hebden Bridge and neighbouring Mytholmroyd were among the worst hit by the storm.

Cars were submerged in the floodwaters and tens of thousands of homes had their electricity cut.

Much of the initial damage and disruption in Europe was along the coasts.

Channel ferry services between the southern English port of Dover and Calais in northern France resumed Monday morning after being halted Sunday.

The whole Belgian offshore wind farm was shut down as powerful gusts caused the turbines to stop automatically for safety reasons.

The storm was so violent that "we are forced to completely stop mainline train traffic in Germany this Sunday evening," Deutsche Bahn spokesman Achim Stauss told AFP.

The disruptions in Germany also began Sunday with more than a hundred flights across three big cities cancelled.

Sunday's English Premier League fixture between Manchester City and West Ham was called off due to "extreme and escalating weather conditions", City said in a statement.

The entire Women's Super League football programme was also called off. Sunday's Scotland-England clash in the Women's Six Nations rugby tournament has been rescheduled for Monday.

But there was an upside for passengers flying British Airways to London from New York.

The storm helped the flight to finish in the sub-sonic flight record time of 4 hours 56 minutes, according to flight-tracking website Flightradar24.

A British man wearing only a pair of swimming trunks braved the weather on a charity walk the length of mainland Britain from Lands End, southwest England, to John o'Groats, northeast Scotland.

"Speedos are designed to get wet and mine are absolutely soaking in this weather," said fundraiser Michael Cullen as he trekked in Glastonbury.