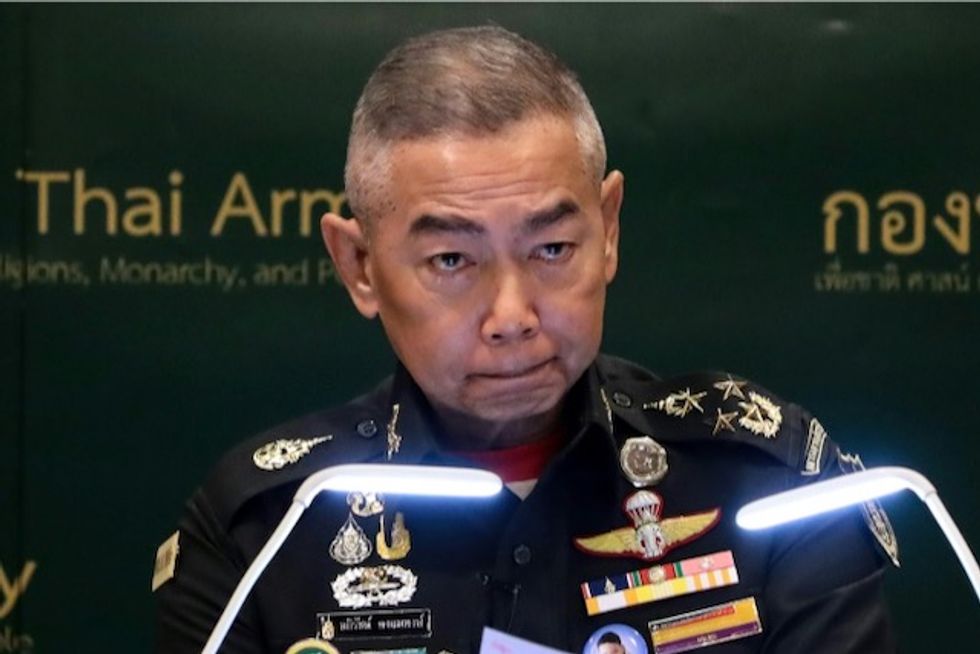 An emotional Thai army chief on Tuesday urged a nation in mourning over a mass shooting "not to blame the army" after a soldier gunned down at least 29 people in a rampage linked to a debt dispute with a senior officer.

General Apirat Kongsompong, an arch-royalist more commonly prone to rants against pro-democracy figures, broke down in tears as he apologised during a televised press conference on behalf of the army to the victims of the shooting.

The Thai army has been at pains to portray him as a rogue soldier rather than a product of the army system.

Apirat said he would not stand down from his post in charge of an army which has seeped into all aspects of Thai life, from politics and business to conscription, with a mega-billion budget that has surged since the last coup in 2014.

"The army is a huge organisation comprising of hundreds of thousands staff... I cannot focus on every subordinate," he said.

"There are people who criticise the army, I urge them not to blame the army... because the army is a sacred organisation," adding "blame me - General Apirat."

Instead he pledged to open a "special channel" to investigate all future complaints from junior officers about their superiors, blaming the attack on a debt dispute between the gunman and his commanding officer.

The gunman "did not receive justice from his commander and his relatives who promised him financial returns", Apirat added, apparently from a commission over the sale of house.

Jakrapanth killed his commander and the commander's mother-in-law first as he embarked on an around 17-hour shooting spree.

Serving army top brass sit on the boards of state-enterprises, while many declare assets in their millions of dollars despite their meagre soldier's wages.

"I guarantee between February and April there will be many - from generals to colonels - who will be jobless," Apirat said, also promising to throw out retired army officers from government housing.

Apirat himself is due to retire in September.

Thais have flooded social media with criticism of their leaders for a perceived lack of empathy in the aftermath of the unprecedented mass shooting.

Prime Minister Prayut Chan-O-Cha was forced into rare public contrition on Sunday after he smiled and high-fived a crowd as he visited Korat, the city where the shooting took place.

No member of the kingdom's rich ruling royal family, who are buttressed by the army and protected by a defamation law, has so far visited survivors.