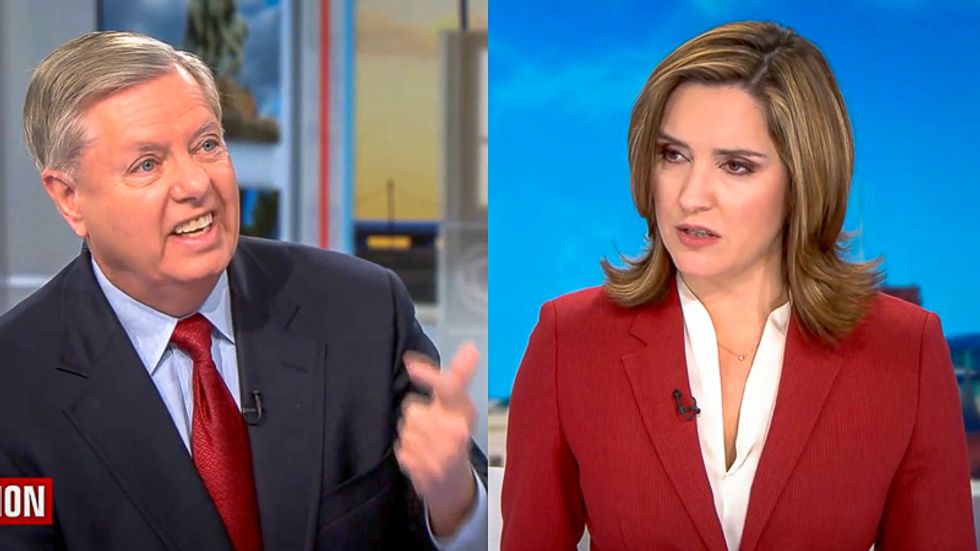 Lt. Col. Alexander Vindman has become a target of Republicans after participating in the president's impeachment hearings. On Sunday, Sen. Lindsey Graham (R-SC) suggested that Vindman, who was forced out of his White House position, likely leaked information about President Donald Trump's Ukraine scheme to the original whistleblower who outed the crime.

However, there is no evidence to support Graham's theory.

"What have I learned in the last two years?" Graham told CBS host Margaret Brennan. "As to Col. Vindman, he was not allowed to be asked questions about his alleged connections to the alleged whistleblower."

"He was asked," Brennan interjected. "And he denied it."

The CBS host pointed out that Vindman's twin brother was also removed from the administration although he had no role in the Ukraine scandal.

"Nobody knows this!" Graham exclaimed. "I can promise you this, he has never been asked questions like, 'Did you leak to the whistleblower?' People in his chain of command have been suspicious of him regarding his political point of view."

Brennan reminded Graham that the Trump administration is on record saying there were no leaks from the National Security Council.

"Well, I am not," Graham stated. "I want the man to be asked about what he did with the information. I appreciate his service but there are FBI agents who took the law in their own hands, there are CIA agents who took the law into their own hands. There are Department of Justice lawyers who lied to the court. There's been a movement since President Trump was elected by people in our government to bring him down."

"Is this retaliation?" Brennan asked of Vindman's firing.

"We're not going to be intimidated," Graham shot back. "Who is the whistleblower?"

"He is an officer and he is not a allowed to speak out on his own behalf," Brennan continued.

"I don't know what role he played with the whistleblower but we're going to look," Graham said, brushing aside Brennan's point.

"Should Gordon Sondland have been fired too?" Brennan wondered.

The question set Graham off: "We're not going to live in a world where the Department of Justice, the CIA and the FBI can cut corners, go after Trump and nobody gives a damn."

"It was retaliation," Brennan observed.