The US and India: areas of agreement and discord 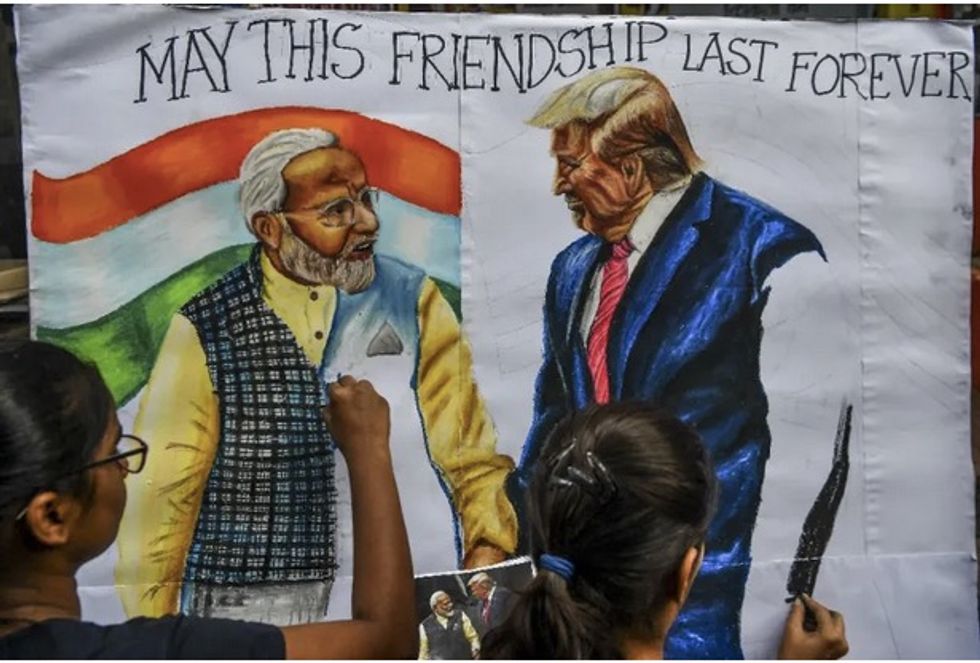 Ever since Bill Clinton visited 20 years ago, India-US relations have warmed politically, economically and strategically. But niggling differences remain, particularly over trade.

Ahead of US President Donald Trump's first official visit to the world's biggest democracy starting Monday, AFP looks at the main areas of agreement and discord with Prime Minister Narendra Modi's government.

India is the world's fifth largest economy, according to the International Monetary Fund, ahead of Britain and France, and will become the planet's most populous country by 2027, the UN projects.

US-India trade volumes ballooned to more than $140 billion in 2018 from $19 billion in 2000, according to the US government, although volumes exchanged with China are more than five times larger.

The Indian diaspora in the US is estimated at four million and they are major contributors in Silicon Valley in particular. The chief executives of Microsoft and Google were both born in India.

During Trump's visit, India may agree to the sale of five nuclear reactors, the fruit of a landmark but contentious atomic deal signed under then leaders George W. Bush and Manmohan Singh in the 2000s.

"They've been hitting us very, very hard for many, many years," Trump said before his trip.

Trump in 2018 imposed tariffs on steel and aluminium from India and elsewhere, and last year suspended India's duty-free privileges under the decades-old US Generalized System of Preferences programme.

Modi, whose "Make in India" mantra mirrors Trump's "America First" slogan, responded by hiking import duties on US farm produce such as almonds. In this month's budget it raised other tariffs.

The tussle means that efforts to reach a comprehensive trade deal are doomed, at least during Trump's visit, although they may reach a smaller agreement.

Plans to force foreign firms to store Indian consumers' data locally have also irked US businesses, as have e-commerce regulations hitting firms such as Amazon and Walmart.

The US and India share a mistrust of China. India and China fought a short war in 1962 and in 2017 they had a tense military standoff over the disputed Himalayan territory of Doklam.

Washington and New Delhi have been worried by China's growing clout in the Indian Ocean, while China has enraged India with its economic and diplomatic support for arch enemy Pakistan.

In 2016, the US designated India as a "Major Defense Partner" and last year they signed a deal easing the transfer of advanced weaponry and the sharing of encrypted military communications.

Trump and Modi will reportedly sign around $3 billion worth of defence deals including for 24 anti-submarine navy helicopters and will discuss a $1.9-billion missile defence shield for the capital.

A US decision on whether to impose sanctions on India as a result is outstanding, something that would dramatically worsen relations between the two countries.

Another irritant for Modi would be if Trump repeats his offer to mediate between India and Pakistan over their long-running dispute over Kashmir that a year ago again sent them close to war.

Similarly Modi will not like hearing any criticism over India's move in August to revoke the partial autonomy of Indian Kashmir and impose a security and communications lockdown.

Any allusion by Trump to new citizenship legislation criticised as anti-Muslim and which has prompted weeks of protests and unease abroad might also go down badly.

A senior US administration official said Trump would indeed raise concerns about religious freedom, "which is extremely important to this administration".