This basic data exposes Trump's stupidity on the economy

By multiple measures, workers are faring poorly under Donald Trump compared to his predecessor. Yet Trump keeps telling workers that because of him they are doing better. Let’s examine the facts.

The latest news shows that growth in the last three months of 2019 was at a modest pace of 2.1%. That’s a third of what candidate Trump promised (a ridiculous promise that many believed), it's lower than the 3.2% average growth of the last 73 years and its lower than during the second term of the Obama administration.

The rate of GDP growth has been slower each year that Trump has been in office, as we reported earlier and even earlier and still earlier when we gave Trump a grade of C.

A big reason for slow economic growth is that while cash piles up in the accounts of those at the top of the economy, the vast majority struggle to make ends meet.

'Our wages are too high. Everything is too high. Having a low minimum wage is not a bad thing for this country.'

The Trump administration is hostile to the idea of a minimum wage and opposes any increase. The federal minimum wage has been stuck at $7.25 an hour since 2009. Adjusted for inflation, its shriveled to just $6.05 per hour.

For people who get tips, like restaurant wait staff, the minimum wage has been stuck at $2.13 an hour since 1992. Its real value has been halved in the last 28 years. Tips, under federal law, make up the $5.12 an hour difference to meet the $7.25 minimum wage.

Candidate Trump asserted in 2015 that American workers are paid too much.

“Our wages are too high. Everything is too high,” Trump said on MSNBC’s Morning Joe. Trump added, “having a low minimum wage is not a bad thing for this country.”

Trump said it again at a Republican primary debate sponsored by Fox News and the Wall Street Journal.  “Wages too high,” Trump said.

He asserted that America can’t compete in global markets because workers make too much money.  Never mind that few low wage Americans work in jobs making goods or providing services our country exports.

In recent months Trump started crowing that pay is “rising fastest for low-income workers.” He said it in the State of Union, at rallies and in White House lawn comments. And he said his economic and tax policies that are making pay at the bottom grow.

Pay at the bottom is indeed rising after years in the economic doldrums. But Trump deserves zero credit for that. The credit goes to lawmakers in 22 states—and many cities and counties—who voted to raise the minimum wage.

As this graphic from the Economic Policy Institute shows wages at the bottom are up because of those states and localities that increased the minimum wage. 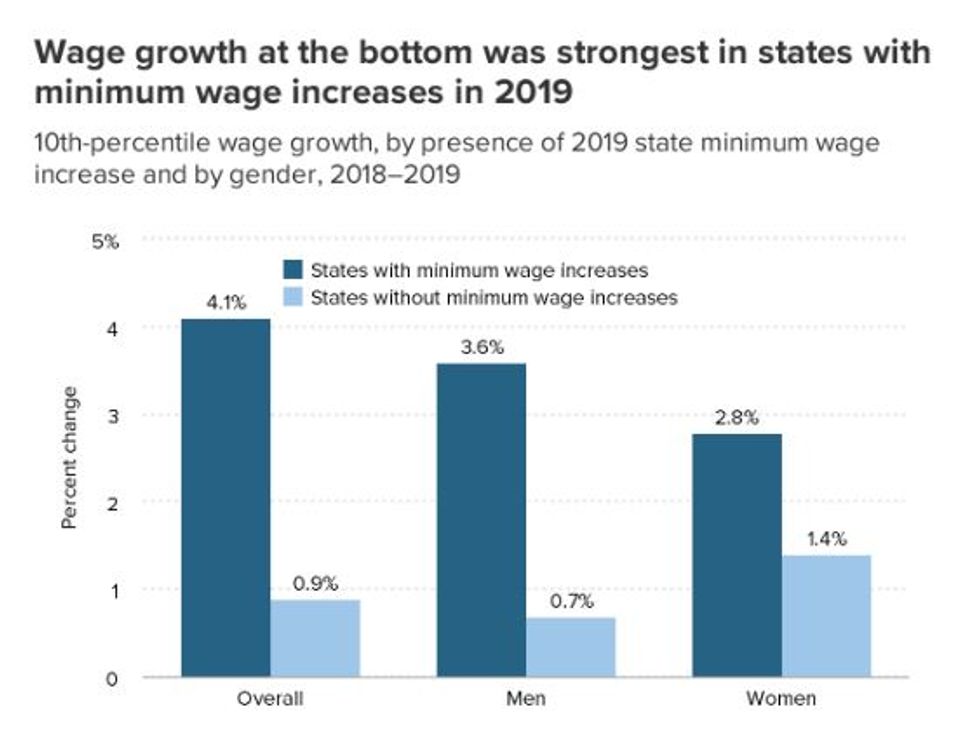 Now consider the average wage for private-sector workers, which mixes these extremes of paltry and fantastic pay along with everyone in between.

In Trump’s first three years the inflation-adjusted average wage increased 3%, That’s exactly the same 3% as for Obama’s last three years, Bureau of Labor Statistics data show. In other words, Trump did nothing special.

Growth at the Top

And what if we look at a broader measure—household income. That’s wages plus business profits, capital gains, dividends, farm sales, rents, pensions and more. For those at the top income, growth has been fabulous.  For everyone else not so much.

So what happened to median household income—half more, half less. It gives a solid sense of the typical American income.

Finally, if you harbor any remaining belief that Trump is helping workers make more, consider these two facts from consecutive days earlier this month.

On Feb. 10 Trump said that due to a “national emergency or serious economic conditions affecting the general welfare,” federal workers would not get a scheduled 3% pay raise. He cut their increase to just 1%, which considering inflation is a pay cut.

The next day Trump struck the opposite note when he tweeted:

Trump is nothing if not consistently inconsistent except for one thing: using his powers to make sure workers don’t share in economic growth.