'This is a war crime': Video of IDF bulldozer dragging body of Palestinian man in Gaza sparks outrage 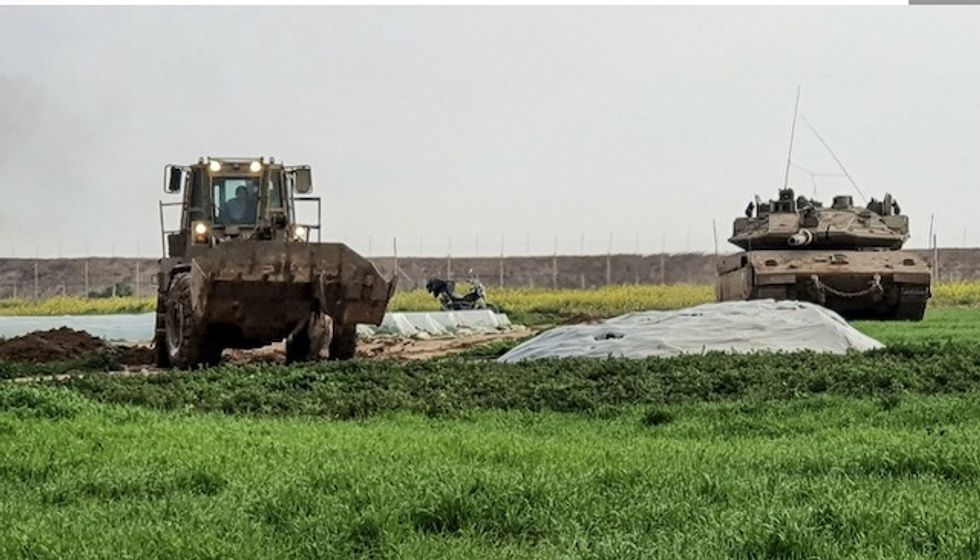 This picture taken with a mobile phone on Feb. 23, 2020 shows an Israeli bulldozer carrying a body of a Palestinian, shot dead by Israeli forces after he was suspected of placing a bomb, along the Gaza-Israel separation fence, east of Khan Yunis in the southern Gaza Strip. (Photo: Muthana al-Najaar/AFP)

Human rights advocates are demanding that the Israeli military immediately open a criminal investigation into the incident.

[Warning... Graphic footage contained in or linked to in this article... Some people may find disturbing.]

Human rights advocates expressed outrage and called for a criminal investigation after video footage of an Israeli military bulldozer dragging the body of a Palestinian man shot dead by Israeli forces in the occupied Gaza Strip circulated widely across social media over the weekend.

"This is a war crime," tweeted the Legal Center for Arab Minority Rights in Israel, a nonprofit group known as Adalah, in response to the Shehab news agency video. The group demanded in a letter (pdf) Sunday that Israeli Chief Military Advocate General Sharon Afek immediately launch an investigation into the incident, which took place near the separation fence east of Khan Younis in the southern Gaza Strip.

"In the letter, Adalah attorney Sawsan Zaher detailed a series of international laws—including the Rome Statute, the U.N. Convention Against Torture and Other Cruel, Inhuman, or Degrading Treatment, and the Hague Regulations—which classify the Israeli military actions depicted in the video as war crimes and blatant violations of international criminal law, and international human rights, and humanitarian law," the group said in a statement.

The Palestinian Islamic Jihad (PIJ), the second-largest militant group in Gaza after Hamas, said the 27-year-old dead man was a member of the organization named Mohammed Ali al-Naim, Al Jazeera reported. Two other men were wounded while trying to retrieve his body and later treated at the European Hospital in Khan Younis, said Gaza health ministry spokesperson Ashraf al-Qedra.

According to Al Jazeera:

The PIJ said in a statement the video showed a "brutal crime."

A spokesman for Hamas, the group which governs Gaza, told Al Jazeera that the incident was reflective of Israel's occupation of the Palestinian territories and its treatment of Palestinian people.

"There are hundreds of similar crimes that haven't been documented by the camera. Israeli occupation continues its crime without any legal or ethical deterrence," Hazem Qassem told Al Jazeera.

"Desecrating the dead body of a young unarmed man on the borders of the Gaza Strip in front of the cameras of the whole world is a heinous crime that adds to the occupation's list of crimes against our Palestinian people," said Barhoum.

The Israel Defense Forces (IDF) addressed the incident in a pair of tweets Sunday, saying that Israeli troops saw two "terrorists" attempting to plant "an explosive device next to the security fence." The military added: "Our soldiers opened fire at the terrorists. A hit was identified."

Some journalists and politicians denounced the IDF's conduct on Twitter Sunday:

Agence France-Presse noted that "the Israeli defense minister, Naftali Bennett, has pursued a policy of retaining the bodies of militants from Gaza as bargaining chips to pressurize Hamas, the Islamist group that controls the Palestinian enclave, which has been holding the bodies of two Israeli soldiers since 2014."

Bennett defended the military's handling of the incident, tweeting in Hebrew that "I back the IDF that killed the terrorist and collected the body." He added that "this is how it should be done, and this is how it will be done."

Haartez reported on responses from some members of the Joint List, an alliance of Arab-majority political parties in Israel:

Joint List Knesset member Aida Touma-Sliman described the Israeli army's operation as follows: "They steal a body, abuse it with a bulldozer, and still argue that the army is the most moral in the world. Since Bennett took office as defense minister, hording bodies to bargain with is Israel's declared policy." She described Bennett as "the minister of death and brutality."

Another Joint List lawmaker, Ofer Cassif, said: "Abducting a body is the nauseating, blood-thirsty act of vampirism. Here is what [Israeli Prime Minister Benjamin] Netanyahu has to offer: Siege, killing, and abducting bodies. We need to put an end to their celebration of death."

Since the video began circulating on Twitter, Palestinian groups in Gaza fired more than 20 rockets into Israel—many of which were intercepted by Israel's Iron Dome missile defense system. Following that, according to the Washington Post, "Israeli military jets targeted sites in Gaza and Syria linked to Palestinian Islamic Jihad on Sunday night."

On Monday, Palestinian groups fired at least 14 more rockets into Israel and the IDF struck targets in Gaza.