Tom Cotton hints without evidence coronavirus is Chinese biological warfare: 'Err on the side of caution' 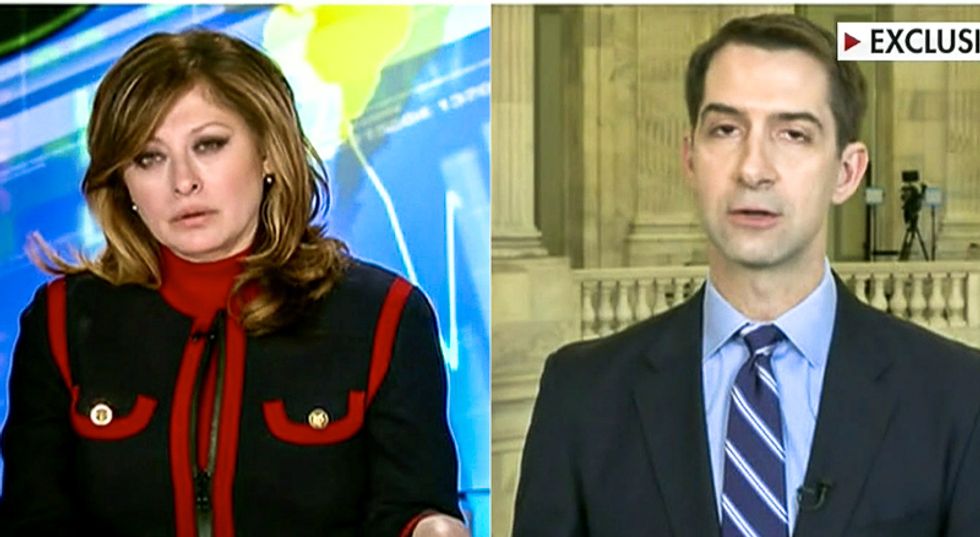 Sen. Tom Cotton (R-AR) suggested on Sunday the coronavirus, which has killed over 1,000 Chinese citizens, is a biological weapon developed by the Chinese military.

Cotton made the remarks on the Fox News program Sunday Morning Futures. The senator insisted that reports that the virus started in a Chinese food market were incorrect.

"This virus did not originate in the Wuhan animal market," Cotton said. "We don't know where it originated but we do know that we have to get to the bottom of that. We also know that just a few miles away from that food market is China's only biosafety level four super laboratory that researches human infectious diseases."

Cotton admitted that he has no evidence that the disease originated at the laboratory.

Fox News host Maria Bartiromo pointed out that Cotton has been criticized by Chinese officials for promoting idea that the virus could be "biological warfare."

"We have such laboratories ourselves in the United States, run by our military," Cotton explained. "The burden of proof is on the Chinese Communist Party... we do want to err on the side of caution."

Rep. Bennie Thompson (D-MS), the chairman of the House Select Committee investigating the January 6 Capitol riots, has put the inspector general's office for the Department of Homeland Security on notice.