'Triggered much?' Donald Trump Jr. torn apart for pushing bogus claim that Pelosi can be jailed for ripping SOTU speech 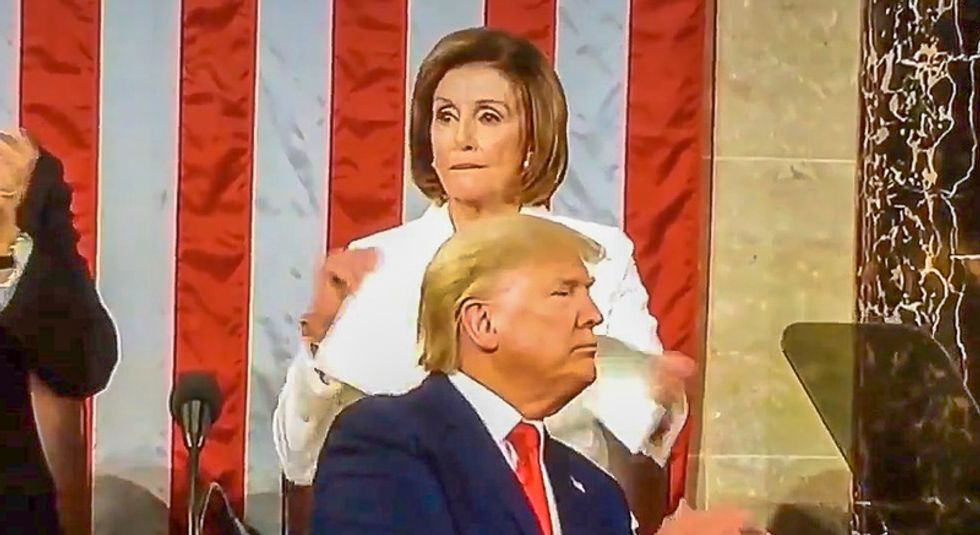 Trump supporters including Turning Point USA leader Charlie Kirk this week made a legally illiterate claim that House Speaker Nancy Pelosi (D-CA) could face jail time for tearing up her copy of President Donald Trump's State of the Union address.

"US Code prohibits the destruction of government records," Kirk wrote on Twitter Tuesday night. "Nancy Pelosi may have just committed a violation of 18 U.S.C. § 2071, Section 2071 (a) when she ripped up President Trump’s State of the Union address. This violation is punishable by up to three years in prison."

Even though no serious legal experts believe Pelosi will face criminal charges for ripping up pieces of paper, Kirk's claims were subsequently amplified by Rep. Dan Bishop (R-NC), who suggested that Pelosi could be removed from office for her actions. Donald Trump Jr. then chimed in to say that Democrats would have impeached his father for tearing up pieces of paper.

As Reuters criminal justice reporter Brad Heath explains, however, the claims made by Kirk and his allies are legal nonsense.

"Guys, this is about as correct as the argument that President Trump violated 18 U.S.C. § 2704 when he Sharpied a weather map," he wrote. "Which is to say, it's nowhere close. Among other things, 2071 is a specific intent crime. It prohibits 'willfully and unlawfully' destroying records, and the government is required to prove that a person knew it was unlawful to do so at the time."

Other reporters and experts similarly heaped scorn on Kirk and Bishop -- check out some reactions below.

A GOP congressman has joined the chorus of cultists accusing the speaker of the house of a crime for ripping a copy… https://t.co/Lpuii3YvgX
— Radley Balko (@Radley Balko)1580918504.0

@charliekirk11 To prevent the spreading of misinformation, I will gladly inform you the document @SpeakerPelosi tor… https://t.co/3eSFjKO9sV
— Jack Wallen (@Jack Wallen)1580914654.0

@franklinleonard Luckily for Charlie Kirk, being an idiot is not punishable by up to three years in prison.
— Dan Baer (@Dan Baer)1580880749.0

The White House literally hired someone to tape back together the government documents Trump routinely shreds to pr… https://t.co/6CH7M4A1FH
— Lachlan Markay (@Lachlan Markay)1580915094.0

Going to use this the next time someone asks me why I don’t take Charlie Kirk seriously https://t.co/KrEKSCkJPT
— Mike Ciandella (@Mike Ciandella)1580910419.0