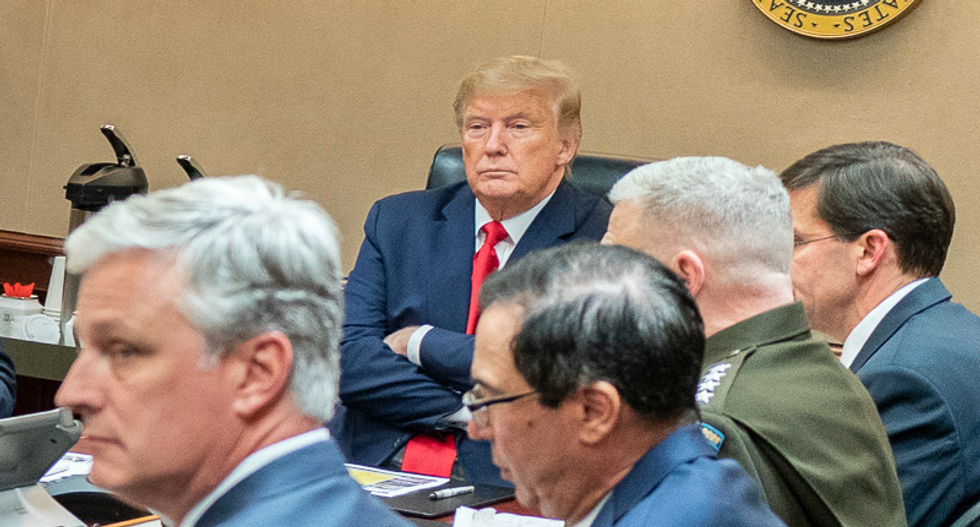 As the Senate impeachment trial of Donald Trump comes to a close without enough Republican support to remove him, a new report in Vanity Fair on Monday found that the president is already looking to “go after” his perceived enemies.

“Trump has been calling people and telling them to go after Bolton,” a source briefed on the private conversations said. The source added that Trump wants Bolton to be criminally investigated. A person familiar with Trump’s thinking said Trump believes Bolton might have mishandled classified information. According to a former official, the White House is planning to leak White House emails from Bolton that purportedly allege Bolton abused his position at the National Security Council. The official said that West Wing officials have discussed releasing emails “showing [Bolton] was doing pay-to-play,” the official said. A person close to Bolton dismissed the story. “John plays things straight,” the person said.

The sourcing for these claims is unclear, and it’s far from certain that even if the report is accurate, Trump or those around him will actually follow through with this revenge.

But the report is worth taking seriously because, based on the incentives before Trump and his natural inclinations, there’s no reason to think he wouldn’t behave this way. We already know that he engaged in a months-long crusade to target his political rival with a foreign law enforcement investigation. To defend himself against the impeachment charges that arose from that matter, Trump picked Alan Dershowitz as one of his lawyers, who argued that the president has an absolute right to target opponents with criminal investigations if he thinks it will help his re-election chances. By voting to acquit Trump, as most or all Republicans will do on Wednesday, they will be giving this argument and this view of presidential power their blessing.

Trump has done it before, too. He told former Attorney General Jeff Sessions to investigate Hillary Clinton, according to former Special Counsel Robert Mueller’s report. And when Sen. Kamala Harris (D-CA) asked Attorney General Bill Barr whether Trump or the White House had “ever asked or suggested that you open an investigation of anyone,” Barr refused to answer directly.

Here are some of the big-name Democrats Gov. Newsom will lean on to help save his job

SAN JOSE, Calif. — If you’ve watched the Olympics recently, you’ve probably seen an ad featuring Sen. Elizabeth Warren urging Californians to vote no on the Sept. 14 recall election. The Massachusetts Democrat won’t be the last big-name Democrat to make a swing through the Golden State — physically or virtually — to try to help Gov. Gavin Newsom keep his job. “They need star power to grab the attention of Democratic voters,” said Darry Sragow, a seasoned Democratic strategist. Just weeks ago, the recall looked like a long shot. But recent polling suggests that almost as many likely voters want...