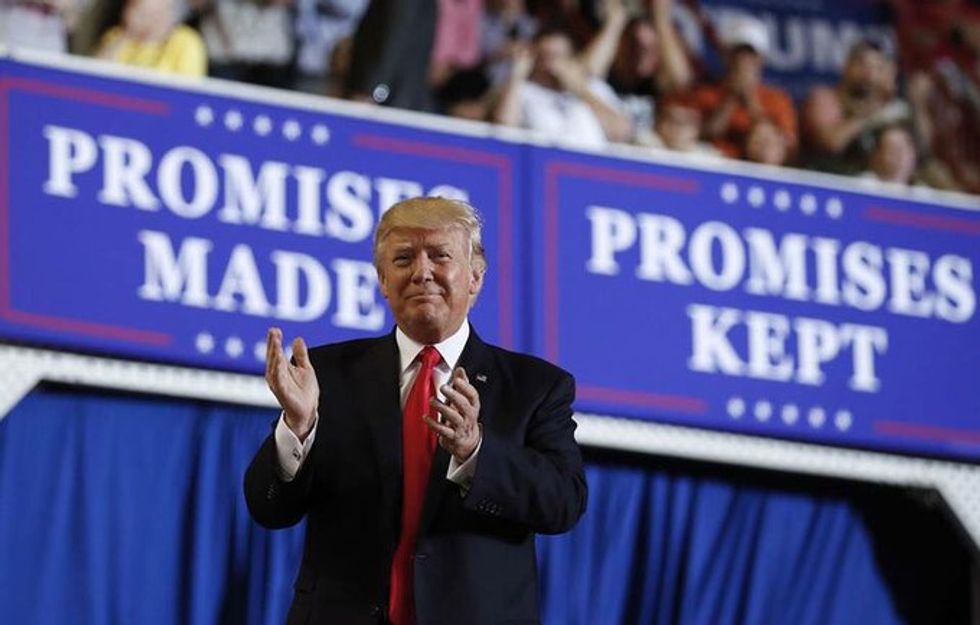 As President Donald Trump runs for re-election on a slogan of "promises made, promises kept" he will have one major obstacle while convincing voters: his record.

According to a new Washington Post analysis, this dynamic will be compounded by the budget Trump is expected to release on Monday.

"On immigration, health care, infrastructure and the deficit, the final budget pitch of Trump’s first term will look much different from the campaign platform he offered four years ago," The Post noted.

The newspaper noted five major campaign promises that are expected to be compromised by Trump's budget, starting with the promise he constantly made while on the campaign trail in 2016.

"The border wall that he promised would be paid for by Mexico is instead being financed by billions in U.S. taxpayer dollars, and the administration’s budget request to Congress is expected to seek even more," the newspaper noted.

The second promise was that Trump would protect Medicaid.

"The president’s 2015 promise to protect Medicaid from cuts has been repeatedly ignored, as he has sought to slash some $800 billion over a decade from the health program for low-income Americans," The Post reminded.

The third promise Trump made is that he would protect Americans with pre-existing conditions.

"He is also seeking to gut the Affordable Care Act through the courts despite pledging to safeguard one of its key tenets: insurance coverage for people with preexisting conditions," the paper explained.

The fourth promise yet to be kept was Trump's vow to push an infrastructure plan.

"During the 2016 campaign, Trump vowed to deliver a major infrastructure plan, but there has been virtually no progress on this issue," the newspaper noted.

The final major issue is the federal debt, which ballooned after Trump signed into law the Republican tax cuts for the wealthy.

"And the president’s promise to eliminate the government’s roughly $20 trillion debt within eight years has also gone unfulfilled. Instead, Trump has added almost $3 trillion to the debt in three years, and that number is only expected to balloon, according to nonpartisan estimates. Proposals to cut domestic programs have evaporated in massive year-end budget deals with Congress that have actually raised spending limits," The Post reported.