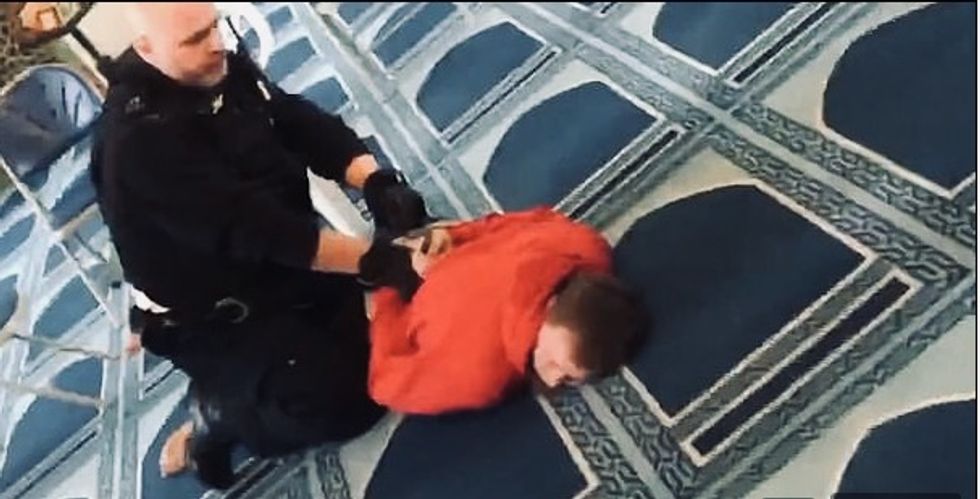 British police on Thursday said they were not treating as terror related a London mosque stabbing in which an elderly worshipper suffered non life-threatening injuries.

The London ambulance service said the victim had been taken "to a major trauma centre" after the mid-afternoon attack.

"A 29-year-old man, who is believed to have been attending prayers, was arrested inside the mosque on suspicion of attempted murder," the London police said in a statement.

"The incident is not being treated as terror related at this time."

The police said the victim was a man in his 70s and his condition "assessed as non life-threatening."

The London Central Mosque said the assailant stabbed its Muazzin -- a religious leader who calls the faithful to prayer -- during the fifth daily prayer.

It added that the assailant was apprehended by worshippers until the police arrived at the scene.

The victim "did not sustain any life-threatening injuries but was seriously injured and is being treated at the hospital," the mosque said on its website.

One witness said the man appeared to have been stabbed in the neck while another said it was the right shoulder.

Prime Minister Boris Johnson tweeted that he was "deeply saddened" to learn of the attack.

"It's so awful that this should happen, especially in a place of worship. My thoughts are with the victim and all those affected," Johnson said.

Photographs shared on social media from inside the mosque in Regent's Park showed a white man in a red hooded top being pinned to the ground and handcuffed by two police officers.

The picture showed a group of male worshipper in their winter overcoats standing nearby and watching the scene.

One video showed a small knife lying under a plastic white chair next to the suspect.

Another showed the suspect being silently led escorted out of the mosque by police.

The Muslim Council of Britain said that "regardless of the motive of the attacker, we must remain remain calm but vigilant".

"We will be reassessing out safety advice to mosques across the country," it said in a statement.

"Whilst many Muslims may be fearful, it is heartening to see faith and community leaders expressing their solidarity and support."

One witness told Britain's domestic Press Association that the suspect "was praying behind him and then he stabbed him".

The mosque said it had received phone calls expressing concern and solidarity from the offices of both Johnson and London Mayor Sadiq Khan.

"Every Londoner is entitled to feel safe in their place of worship and I want to reassure London's communities that acts of violence in our city will not be tolerated," the London mayor tweeted.

The Archbishop of Canterbury Justin Welby also tweeted his "sympathy".

The stabbing occurred one day after a shooter with apparent far-right beliefs killed nine people at a shisha bar and a cafe in the German city of Hanau.

The victims were all described as having a "migrant background".

Britain's interior minister Priti Patel said on Twitter that "police must now be given space to investigate" the London attack.

Photo: A police officer holds a man on the floor today following the stabbing incident at the mosque (Screen Capture)