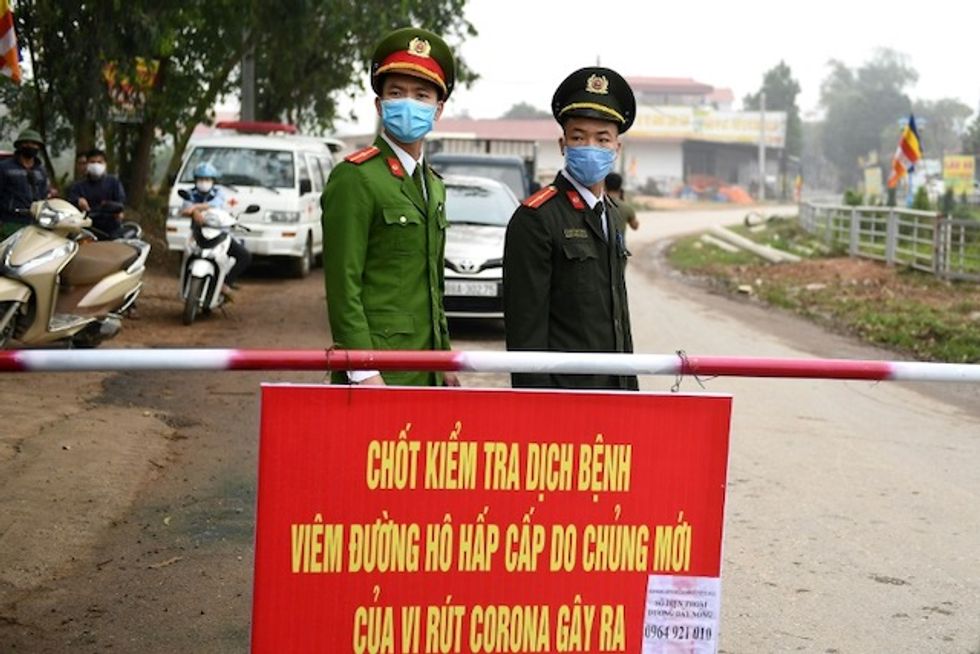 More than 10,000 people in villages near Vietnam's capital were placed under quarantine Thursday after six cases of the deadly new coronavirus were discovered there, authorities said.

In the first mass quarantine outside of China since the virus emerged there in late December, the Son Loi farming region about 40 kilometers (25 miles) from Hanoi will be locked down for 20 days, the health ministry said.

Checkpoints have been set up around the six villages that make up Son Loi, said an AFP team on the outskirts of the area in Binh Xuyen district.

Health officials wearing protective suits sprayed disinfectant on vehicles. Police warned people wanting to enter the quarantined area that while they would be allowed in, they would not be able to leave.

The order comes after the health ministry reported that five people have been infected with the virus. It later announced a sixth case.

They all originated from a female worker who was sent to Wuhan in central China -- where the virus originated -- for training.

The disease then spread to her family and her neighbors, including a three-month-old baby.

So far, only the female worker has fully recovered and been discharged from the hospital, according to updates from the ministry, while the others remain in a "stable" condition.

The Son Loi area of roughly 1,000 hectares (2,500 acres) is made up of farmland. Many of the 10,600 residents also commute to nearby factories for short-term labor jobs.

Villager Tran Van Minh told AFP that authorities had already advised them to avoid large gatherings, though the cluster of infections in his village likely began due to Tet lunar new year celebrations last week.

"The woman infected her family and neighbors after Tet visits," he said, adding that he and his family remain in good health.

But "life has been badly affected," he told AFP by phone, adding that much of the labour force is reliant on jobs in construction and house painting.

"Now we cannot get out and even if we do, clients don't welcome us that much as before."

AFP / Nhac NGUYEN More than 10,000 people in villages near Hanoi have been quarantined in a bid to stop the coronavirus spreading

Authorities in Son Loi began handing out face masks after the Tet holiday ended on January 30. Since then children and elderly have largely been confined to their homes.

Minh said he was not worried about running out of food, but he hoped "the epidemic will end soon".

More than 1,350 people have died in China from the virus, and nearly 60,000 others have been infected, since it was first detected in Hubei province in December.

While thousands have recovered, scientists and pharmaceutical companies are racing to test a vaccine and treatment to better target the virus -- though health experts say it could be months before it is readily available.

China has imposed unprecedented quarantines across Hubei, locking in about 56 million people, in a bid to stop it spreading.

Tens of millions of others in cities far from the epicenter are also enduring travel restrictions.

The virus has also had massive ramifications globally, with many countries banning travelers from China in a bid to stop people spreading the disease.

Vietnam, which shares a porous border with China, has 16 confirmed cases of the coronavirus, including those in Son Loi.

It had banned all flights to and from mainland China in a bid to stop the virus from spreading.

It also suspended new tourist visas for Chinese nationals or foreigners who had been in China over the past two weeks.