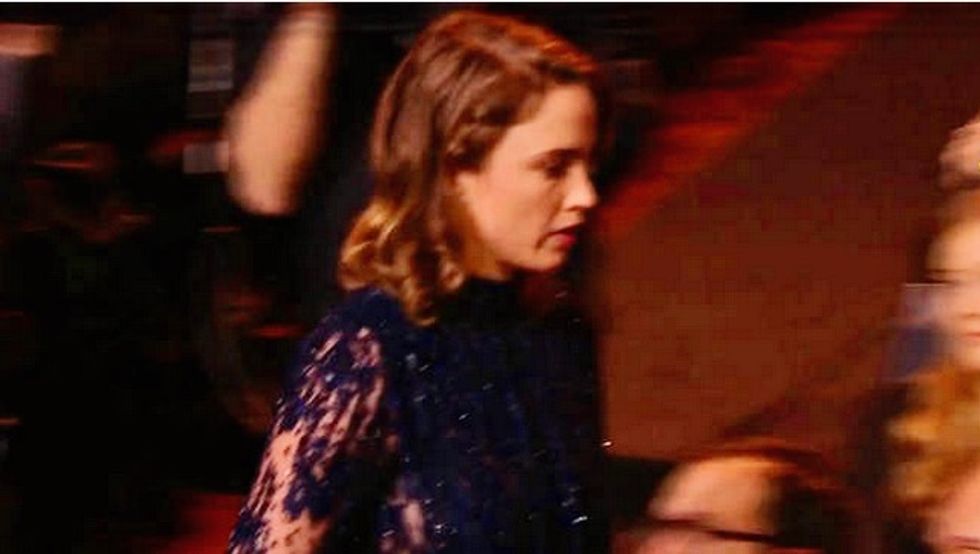 French actress Adèle Haenel walks out of the César Awards on Friday 28 February 2020, just before the French director Roman Polanski is awarded the prize of best director. © Screen capture Canal+

Roman Polanski won best director for "An Officer and a Spy" at a fractious ceremony for the French Oscars, the Cesars, that ended in walkouts and recrimination in Paris early Saturday.

The entire French academy had been forced to resign earlier this month amid fury that the veteran -- wanted in the US for the statutory rape of a 13-year-old girl in 1977 -- had topped the list of nominations.

Protesters chanting "Lock up Polanski!" tried to storm the theatre where the ceremony was being held before being pushed back by police firing tear gas.

And France's Culture Minister Franck Riester had warned that giving the maker of "Rosemary's Baby" a Cesar would be "symbolically bad given the stance we must take against sexual and sexist violence".

But Polanski won two awards, best adapted screenplay and best director -- with the latter prompting Adele Haenel, who was nominated for best actress for "Portrait of a Lady on Fire", to storm out, crying "Shame!"

Haenel has become a hero of the #MeToo movement in France after accusing the director of her first film, Christophe Ruggia, of sexually harassing her when she was only 12.

"Distinguishing Polanski is spitting in the face of all victims," Haenel had said in the run-up to the Cesars.

Polanski, 86, and the entire team of his historical drama had boycotted the ceremony, fearing a "public lynching".

"An Officer and a Spy" is based on the Dreyfus affair which divided France in the late 19th century when a Jewish army officer was wrongly prosecuted for spying.

"What place can there be in such deplorable conditions for a film about the defence of truth, the fight for justice, (against) blind hate and anti-Semitism?" the director told AFP.

Polanski's epic, which won two top prizes at the Venice film festival last year, was in the running in 12 categories at the Cesars.

But the big winner on the night was the Oscar-nominated "Les Miserables", set in one of France's deprived and restive suburbs.

It took best film and three other prizes including the audience award.

It's Mali-born director Ladj Ly made an appeal for unity on a highly fraught night, saying "our enemy is not the other, but poverty".

With the French film industry at war with itself over Polanski, Hollywood star Brad Pitt also snubbed the event having reportedly been offered an honorary award.

The French press had dubbed the event "The Cesars of Anguish", with Le Parisien daily mocking up a movie poster of Hitchcock's "Vertigo".

And the ceremony lived up to its billing.

The poisonous atmosphere had already worsened on the eve of the awards when 30 film figures from minority backgrounds lashed the lip service they claimed the industry plays to inclusion.

In a blistering open letter they said black, North African and Asian-origin performers are mostly confined to stereotypical bit parts in French films.

On the night, one of the signatories of the letter, actress Aissa Maiga, delivering a scathing critique of casual racism in the industry as she presented the prize for best newcomer, including skewering presenter Florence Foresti for once donning blackface.

But it was the absent figure of Polanski which caused most unease, with a presenter only daring to mumble his name when he opened the envelope for his first win.

The publicity campaign for Polanski's movie was halted last year after another woman, photographer Valentine Monnier, claimed that she had also been raped by the director in 1975.

But that did not stop it becoming a box office hit in France.

Polanski had told AFP that he had decided to stay away from the ceremony to protect his family and his team from abuse.

"The activists brandish the figure of 12 women who I am supposed to have molested half a century ago," he said.

"These fantasies of sick minds are treated as established fact," he complained.