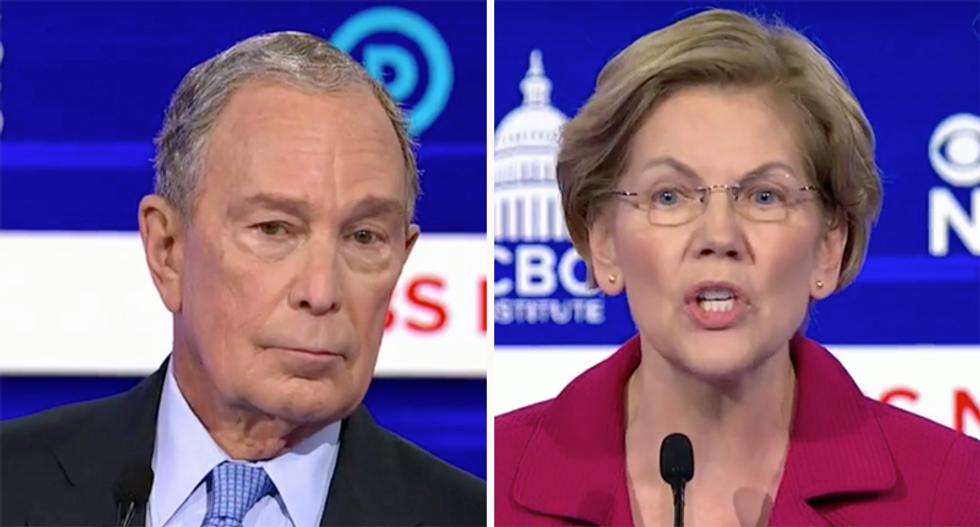 Warren opened by pointing out that Bloomberg has spent much of his life giving money to powerful Senate Republicans — including Sen. Lindsey Graham (R-SC), who has become a major Democratic lightning rod for controversy in the Trump era, Sen. Pat Toomey (R-SC), who narrowly defeated a Democratic woman candidate in 2016, and Sen. Scott Brown (R-MA), who Warren ran against and beat in 2012.

She then discussed her own experience of pregnancy discrimination while working as a teacher, and criticized Bloomberg over the reports that he had told a pregnant employee to "kill it" — a charge that Bloomberg vociferously denied. Warren responded by demanding that Bloomberg release his employees from their nondisclosure agreements if he has nothing to hide about how he has treated his workers.

Bloomberg insisted that Warren has mischaracterized his record, and added, "if [Warren] was a teacher in New York City she would never have had that problem. We treated our teachers the right way, and the unions will tell you exactly that."