WATCH: Republican goes down in flames when CNN's Cuomo corners him on Trump's trade war 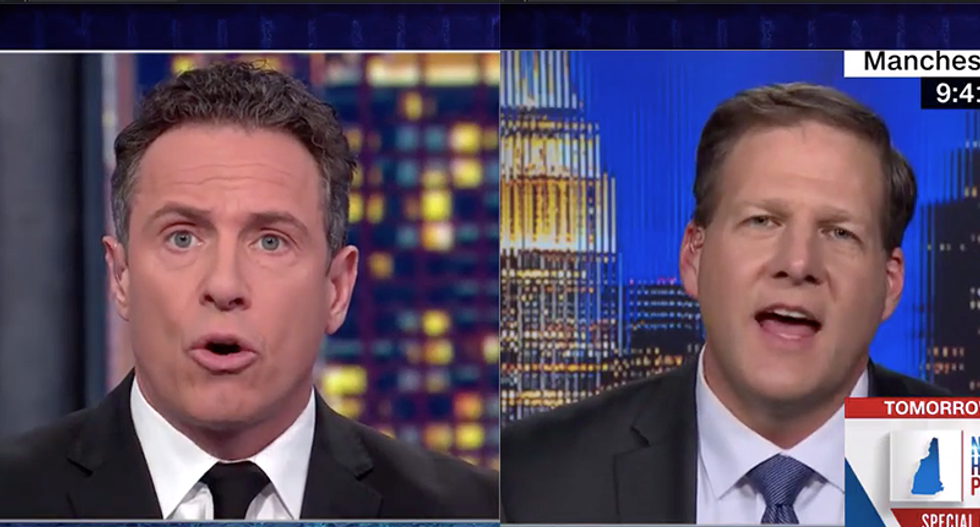 New Hampshire Gov. Chris Sununu largely tries to keep above the partisan fray, but in a discussion with CNN's Chris Cuomo Monday, the Republican governor found himself excusing away the president's trade war.

Sununu bragged about his economy in the state, but Cuomo called him out on neglecting to mention how President Donald Trump's tariffs have caused family farmers greater problems.

"People vote on their wallet and they should. They've got to take care of their households. That's a specific concern. [I] can't argue against that," said Cuomo. "What's been going on in the economy has been going on for a long time. This is a decade-plus expansion. My argument is this: You could get a tax cut and you could get regulatory changes from any Republican. It would be an anathema for them not to do it, actually. But when it comes to what else you get with this president, that is not Chris Sununu."

In fact, Cuomo said that no Sununu he's ever met would agree to put children in cages on the border because he likes the message of harshness.

"Going after trade imbalances by putting tariffs on that you know hurt consumers here," Cuomo also pointed out. "These are not conservative values. He does not talk to people or about people in a way that you ever have in your campaign. You're endorsing the way he speaks, not just the policies. Are you okay with that?"

Sununu chalked it up to "style," which Cuomo flattened immediately.

"When you put kids in cages it's not a style," Cuomo said. "You're owning it by endorsing him. That's my argument."

Sununu argued that Trump gets results done, specifically citing Trump on his eventual trade deal with China, that cost farmers billions over the years he's been fighting with the country.

"But what he's been doing with trade, Republicans hate for a reason, because of tariff kickback," Cuomo said. "And you can't look at what's happening with the farmers, and you can't look at what's happening in your own state and say, 'Oh, we were wrong about tariffs.' Turns out it's okay, we're doing all right. You're not doing all right because of that policy. But that's just policy."

Sununu then tried to argue that Trump was only using the tariffs as leverage and that it got results. While it may have gotten results, the time in between took down a lot of family farmers, forced them into bankruptcy and to suicide. For some, they'll never recover their Chinese clients who moved instead to get produce from Mexico than deal with the U.S. tariff problem.