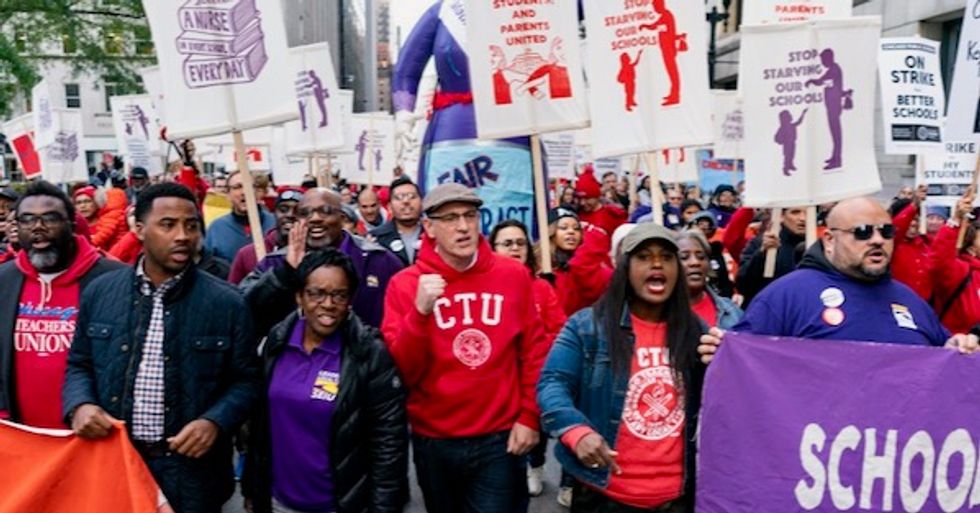 "Trump's economy is not a workers' economy, and workers know solidarity is the best way to fight back."

In yet another rebuke to President Donald Trump's claims that the U.S. economy is "roaring" and his "relentlessly pro-worker" agenda is serving the American public, a report published Tuesday by a progressive think tank revealed that the "number of striking workers surged in 2018 and 2019" after decades of decline.

"The increase in strike numbers shows that workers understand that joining together in collective action remains an effective way to raise wages and benefits, and improve working conditions."

The Economic Policy Institute (EPI) report, entitled Continued Surge in Strike Activity Signals Worker Dissatisfaction With Wage Growth, noted that the spike marked "a 35-year high for the number of workers involved in a major work stoppage over a two-year period."

EPI's report was highlighted on Twitter by Sara Nelson, president of the Association of Flight Attendants-CWA, who declared that "we're just getting started."

We’re just getting started. Cheers to all the strikers who are showing us the way. Workers have power. Not alone, b… https://t.co/SqcLre3nYO
— Sara Nelson (@Sara Nelson)1581439403.0

The jump in numbers, EPI explained, "is largely fueled by an increase in stoppages involving at least 20,000 workers." Key examples include public school teachers in North Carolina, West Virginia, Los Angeles, Chicago, and Kentucky and unionized workers at General Motors, Stop & Shop, the University of California, and AT&T.

"The BLS data on work stoppages, while useful, have a major limitation—the data include only information on work stoppages involving 1,000 or more workers that last at least one full shift," EPI said. "For example, the data do not include the 2018 Google walkouts in protest of the company's handling of sexual harassment, because even though the walkouts involved thousands of workers, they did not last for one full shift."

The report was co-authored by Heidi Shierholz, EPI's senior economist and director of policy, and Margaret Poydock, a policy associate at the think tank.

"Even though we are 10 years into an economic recovery and the unemployment rate is under 4%, working people are still not seeing the kinds of robust wage growth that those at the top have seen for decades," Shierholz said in a statement. "The increase in strike numbers shows that workers understand that joining together in collective action remains an effective way to raise wages and benefits, and improve working conditions."

"We're just getting started. Cheers to all the strikers who are showing us the way. Workers have power. Not alone, but in action together. Solidarity is the way forward."

Poydock pointed out that "the resurgence in recent strike activity has occurred despite current policy that makes it difficult for many workers to effectively engage in their fundamental right to strike." She also praised the Protecting the Right to Organize (PRO) Act, which passed the Democrat-majority U.S. House last week but is unlikely to be approved by the GOP-controlled Senate and Trump.

Along with the PRO Act, the EPI report promoted "additional solutions under discussion that would strengthen the right to strike, including extending unemployment benefits to striking workers, creating tax-deductible strike funds to make it easier for unions to sustain long-term strikes, and forming digital picket lines to inform consumers of real-life collective actions during online interactions with the workers' employer."

Truthout reporter Mike Ludwig, who linked to the EPI findings in a tweet Tuesday, wrote that "Trump's economy is not a workers' economy, and workers know solidarity is the best way to fight back."

During his State of the Union speech on Feb. 4, Trump declared that "jobs are booming, incomes are soaring, poverty is plummeting," and "the years of economic decay are over." The president added that "our economy is the best it has ever been," and discussed the state of U.S. stock markets in his first term.

In response to the president's annual address, Rev. Dr. William J. Barber argued in an op-ed for the Guardian Tuesday that "of all the lies he told, the president is proudest of the economy he claims is booming. Poor and low-income Americans know that the economy is, in fact, his greatest vulnerability."

As Barber, president of Repairers of the Breach and co-chair of the Poor People's Campaign, explained:

Yes, the Dow is at a record high and official unemployment rates are lower than they have been in decades. But measuring the health of the economy by these stats is like measuring the 19th-century's plantation economy by the price of cotton. However much the slaveholders profited, enslaved people and the poor white farmers whose wages were stifled by free labor did not see the benefits of the boom.

We know that elites whose stock portfolios and personal taxes have benefited from the Trump tax cuts are going to stand by this president. But those people are an extreme minority—a literal plutocracy—in this nation. The question in 2020 is not whether Trump's most ardent supporters will stand by him, but whether Democrats will embrace an agenda that can inspire poor and marginalized people to engage in a political system that has simply overlooked them for decades.

Barber's op-ed and EPI's new report came just a day after Trump unveiled his $4.8 trillion FY2021 budget blueprint, which Democratic presidential candidate Sen. Bernie Sanders (I-Vt.) described as "of, by, and for the one percent." As Common Dreams reported Monday, the president proposed cutting funds to safety net programs while pouring more money into the Pentagon and his long-promised border wall.