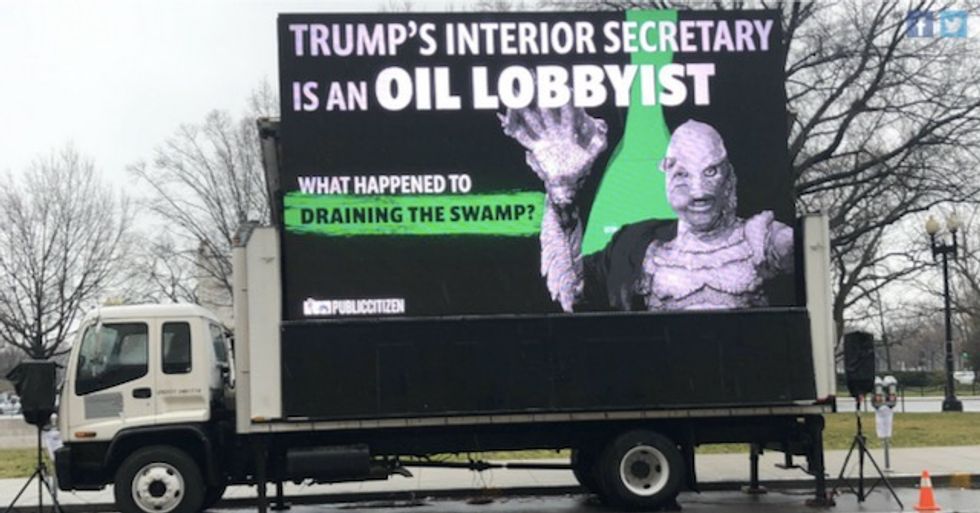 Public Citizen parked a truck with a giant screen outside the U.S. Department of the Interior for eight hours on Tuesday. The screen played on loop a video of Interior Secretary David Bernhardt turning into a "swamp" creature. (Photo: Kelsey Brugger/Twitter)

"If this rollback happens, it will weaken communities' efforts to protect their air, water, and public health."

As activists and experts descended on the U.S. Department of the Interior building in Washington, D.C. Tuesday for a public forum and rally about the Trump administration's recent attack on one of the nation's landmark environmental laws, the advocacy group Public Citizen parked a truck with a massive screen nearby to play a video of a top official morphing into a "swamp monster" on loop for eight hours.

"The video, accompanied by spooky music, will show that it's difficult to distinguish between Interior Secretary David Bernhardt—a former oil and gas lobbyist—and a creature of the Washington, D.C., 'swamp' of lobbyists and corporate cronies that President Donald Trump derided as a candidate but now embraces wholeheartedly," Public Citizen explained.

Advocacy groups that have raised concerns with the administration's proposal reiterated those critiques Tuesday. Friends of the Earth president Erich Pica said in a statement that NEPA "ensures communities have a right to know the environmental and fiscal impacts, and whether less destructive alternatives exist," and Trump's attack on the law "silences the communities across the nation fighting corporate polluters."

"If this rollback happens, it will weaken communities' efforts to protect their air, water, and public health," Pica warned. "We must not allow this critical tool for public engagement to be eliminated by the businesses determined to destroy our environment for profit. We will not tolerate efforts to dismantle our bedrock environmental laws."

Greenpeace USA senior climate campaigner John Noël said in a statement Tuesday that the changes—which would mean agencies don't have to consider the climate impacts of new infrastructure projects—would significantly curb input from communities that would be most affected by such development.

"Fossil fuel infrastructure projects are overwhelmingly located in underrepresented, working class communities," Noël said. "No oil company wants to put an oil well on top of a Trump golf course, or a fracked gas compressor station next to Mar a Lago—they're building pipelines through Indigenous territory and refineries next to Black and Brown neighborhoods. Based on its attempts to roll back NEPA, it's clear the Trump administration views these communities as sacrifice zones."

"Gutting NEPA is an attempt to silence the communities on the frontlines of fossil fuel industry pollution," he charged. "If Trump truly cared about clean air and water for anyone other than his billionaire buddies, he'd strengthen laws like NEPA. Instead, he's handing out favors to oil and gas executives like candy."

Activists, advocacy groups, and reporters shared updates from the rally and forum on social media with the hashtags #ProtectYourVoice and #ProtectNEPA:

“I’m here to #ProtectNEPA because it gives communities like my hometown the chance to review the findings of enviro… https://t.co/6jwuYR2wPa
— CCAEJ (@CCAEJ) 1582645330.0

Grijalva, who also testified at the public hearing, said in a statement Tuesday that "the administration's efforts to gut NEPA through this proposed rule will make it easier for corporate polluters to hide the climate impacts of major projects, including oil and gas projects."

"NEPA's also a critical civil rights tool—it gives all Americans a voice in federal decision-making by allowing communities to be informed and weigh in on major proposed projects affecting their communities," the congressman added. "When the NEPA process is cut short or weakened, ill-conceived projects advance that can have devastating public health and environmental consequences for American communities."