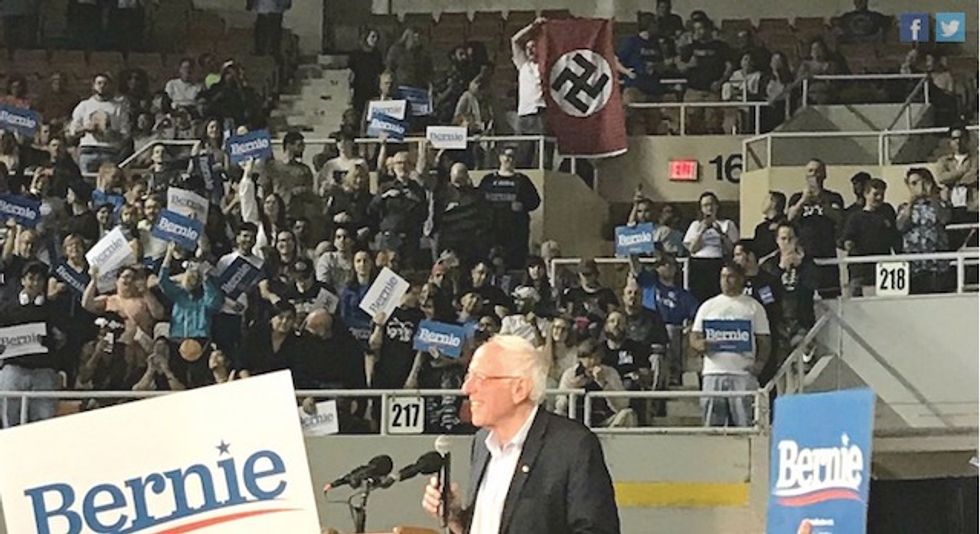 An Arizona campaign rally for Sen. Bernie Sanders, who is vying to become the first Jewish president in U.S. history, briefly took a disturbing turn Thursday after a man in the crowd unfurled a swastika-emblazoned flag as the senator whose family members were murdered in the Nazi Holocaust took the stage and began addressing his supporters.

The cheers for Sanders quickly turned to boos as the senator's supporters noticed the man with the Nazi flag, which was quickly pulled down by someone in the crowd. The man was soon restrained by security and escorted from the venue.

It is unclear whether Sanders saw the flag in real time, but the senator's spokesperson Mike Casca said following the event that Sanders is "aware of" and "disturbed by" it.

"Whoever it was, I think they're a little outnumbered tonight," Sanders said after the man was removed from the rally.

"It was absolutely wild," Brianna Westbrook, a national surrogate for the Sanders campaign, told the Washington Post following the event. "I never thought I would have seen a swastika at a political event. It's gross.”

"It really wakes you up and you see how bad things really are and the climate that we're in," Westbrook added.

IfNotNow, a youth-led progressive Jewish advocacy group, tweeted that it is "absolutely sickening—and scary—to see someone proudly brandishing a Nazi flag at a Bernie rally tonight."

"This is the hatred unleashed by Trump and the GOP," the group wrote. "All people of conscience must condemn this anti-Semitism against the most visible Jewish politician in the country."

The alarming episode was viewed by some as evidence of the urgent need to enhance security for Sanders as he campaigns across the country. As the Post reported, the "swastika flag was just one incident involving protesters that disrupted Thursday's event."

"Later in the night, other people waving banners bearing President Trump's name also got into minor scuffles with Sanders supporters and were promptly removed from the venue by uniformed officers," the Post noted. "By late Thursday, another video surfaced, showing a man... outside the venue shouting the n-word at a black Sanders supporter."

"Hanging a swastika at the rally of a presidential candidate who is Jewish and had family executed by Nazis during the Holocaust is disturbing and threatening," tweeted activist Stacey Walker. "Both [former Vice President Joe] Biden and Sen. Sanders should have secret service protection going forward."