‘America will soon be open for business’: Trump vows he will not ‘let the cure be worse than the problem’ 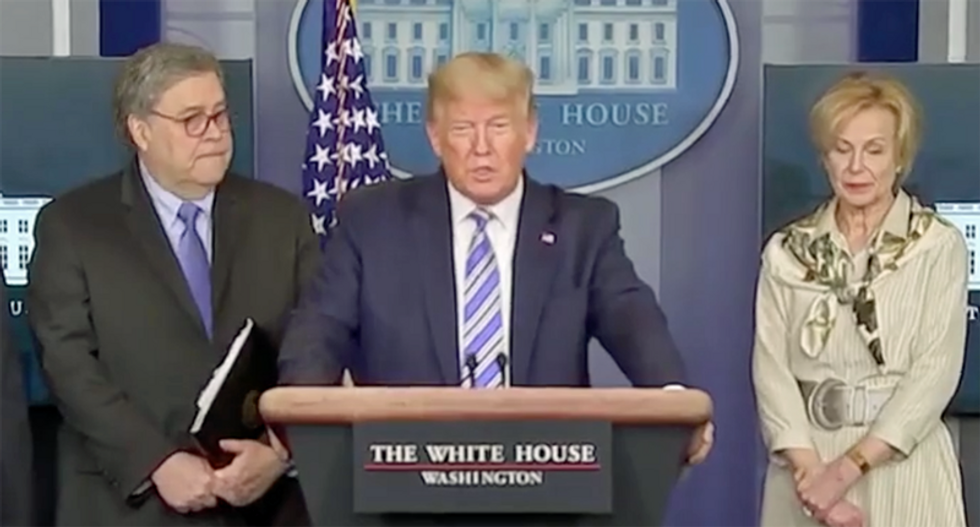 President Donald Trump vowed on Monday that "America will soon be open for business."

Trump did not offer a timeline for the end of COVID-19 closures.

"America will again, and soon, be open for business. Very soon. A lot sooner than three or four months that somebody was suggesting. A lot sooner. We cannot let the cure be worse than the problem itself."

MyPillow CEO Mike Lindell angrily pulled all of his ads off Fox News earlier this year after the cable news network refused to air ads that claimed to prove "voter fraud" in the 2020 presidential election.

However, The Daily Beast reports that Lindell has been trying to reach a deal to get MyPillow ads back up on Fox -- but the network so far has refused to budge.

"Sussmann, the indictment charges, 'lied about the capacity in which he was providing ... allegations to the FBI" of potential cyber links between a Russian bank and a company owned by former president Donald Trump,' the newspaper reported.

Stop the malarkey, Biden: Ban the unvaccinated from airplanes already

On September 18, a group of MAGAheads plans to "rally" in Washington D.C. on behalf of the Capitol rioters who are facing charges for their crimes, deeming them "political prisoners." There is a dispute about how worried folks in D.C. should be about this event. Journalists who follow the insurrectionist movement closely don't think many people will show up. Law enforcement, however, is clearly worried, "taking no chances" and putting up fences around the Capitol and keeping the National Guard on standby.

Regardless of what happens, there is one clear moral to the story: President Joe Biden should have banned the unvaccinated from flying weeks ago.