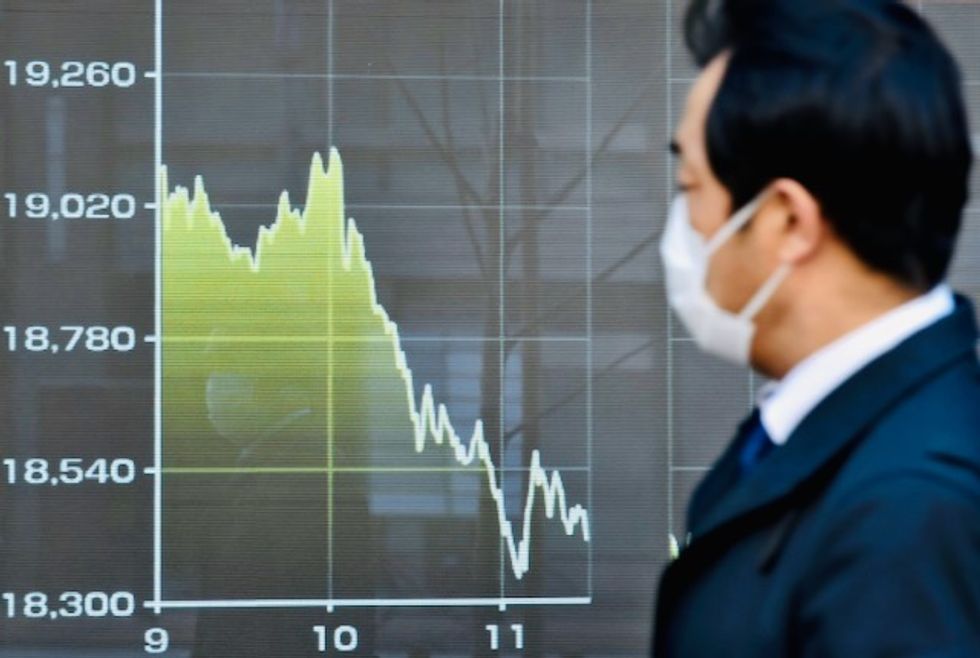 Asian equities sank again Thursday while the dollar surged as a European Central Bank plan to spend more than $800 billion to buy bonds failed to instil optimism in traders who fear that the world is heading for a virus-fueled economic catastrophe.

In what one analyst said could be a "game changer" for the coronavirus-wracked eurozone, the ECB's so-called Pandemic Emergency Purchase Programme aims to give financial markets some much-needed liquidity as investors pull the plug on markets.

It said the 750-billion-euro ($820-billion) program was temporary and will be halted when the coronavirus crisis is judged to be over "but in any case not before the end of the year".

After announcing the move, ECB boss Christine Lagarde tweeted that "extraordinary times require extraordinary action. There are no limits to our commitment to the euro."

Those comments echoed the words of her predecessor Mario Draghi, whose pledge to do "whatever it takes" to preserve the eurozone was seen as a turning point in the region's sovereign debt crisis.

Asian markets initially climbed on the news but soon tumbled as investors contemplate months of economic hardship with countries around the world in lockdown to prevent the spread of COVID-19, which has now infected more than 200,000 people and killed almost 9,000.

Mumbai and Shanghai were more than one percent lower.

Manila plunged almost 25 percent after reopening following a two-day suspension prompted by the outbreak but it later bounced back to sit more than 13 percent down.

The sharp losses were in tandem with a surge in the dollar as investors scrambled for cash to pay debts or just stash away.

The pound is now wallowing around its lowest levels since the mid-1980s, while the greenback was up more than six percent against the Australian dollar and more than three percent on the South Korean won.

The US dollar hit a record high above 75 Indian rupees, while the New Zealand dollar and Russian ruble lost more than five percent.

And AxiCorp's Stephen Innes warned of further turmoil despite the historic moves by banks and governments. "Wartime economics is not going to help with everyone in lockdown sitting at home watching Netflix," he said.

The ECB's bazooka was the latest in a string of measures by central banks and governments aimed at supporting the global economy, which have amounted to almost $2 trillion.

Still, the measures have not been enough to soothe panic-stricken investors and analysts say more must be done. Soon after the ECB announcement, French President Emmanuel Macron called for more fiscal action from leaders.

Australia's central bank became the latest to move, slashing interest rates to a record low on Thursday and pledging to pump billions into the financial system.

But Ryuta Otsuka, chief strategist at Toyo Securities, told AFP: "Offering of liquidity by the (European) authorities supported morning trade, but that was short-lived as people don't know where the exit is from fears over the coronavirus, even though it seems like it is simply something like a bad kind of cold."

The latest rout in Asia followed another day of carnage on Wall Street, where the Dow ended down more than six percent and below 20,000 for the first time since 2017 as traders feared that the spiralling pandemic could tip the world into a severe and long-lasting recession.

The ECB move also had a dramatic effect on the oil market, with the price of the US benchmark West Texas Intermediate up almost 17 percent at nearly $24 a barrel, recouping much of the 24 percent lost the day before.

However, the commodity tracked the sell-off on other markets and lost a large chunk of those gains.

Oil markets have been hammered by collapsing demand as the virus prompts sweeping travel restrictions and business closures, and as major producers Saudi Arabia and Russia engage in a price war.

"There is just extreme volatility in the market now as participants try to assess the economic impact of the coronavirus and what it means for oil demand," Daniel Hynes, at Australia & New Zealand Banking Group, said.