Beto O'Rourke endorses Joe Biden: 'We need somebody who can beat Donald Trump' 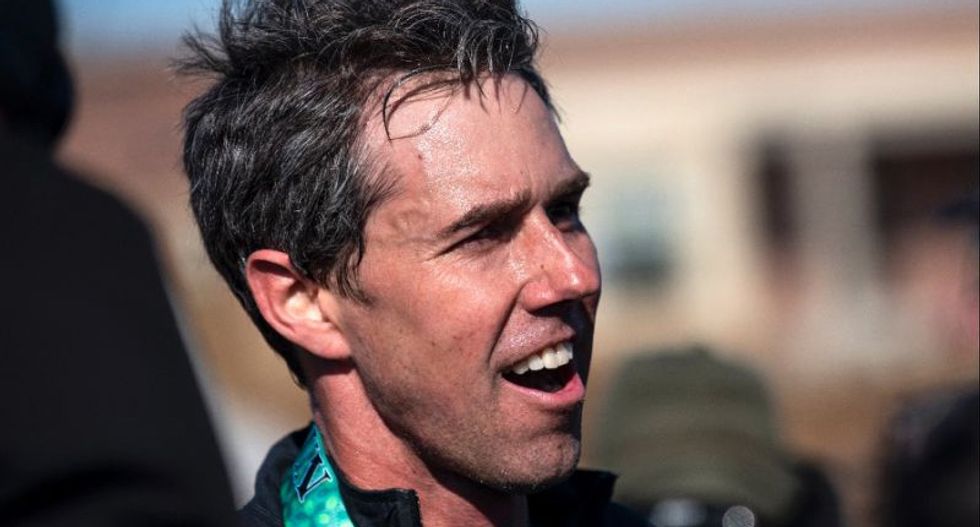 Americans vote Tuesday in primaries that play a major role in who will challenge Donald Trump for the presidency, a day after key endorsements dramatically boosted Joe Biden's hopes against surging leftist Bernie Sanders.

The backing of Biden by three of his ex-rivals marked an unprecedented turn in a fractured, often bitter campaign.

The Democratic establishment is desperate to unite around a moderate candidate who can triumph over frontrunner Sanders, a self-described democratic socialist, and face President Trump in November.

As the five remaining Democratic candidates made their final pitch to voters in 14 states, Biden was capitalizing on momentum he seized at the weekend with a blowout victory in South Carolina.

The 77-year-old former vice president is consolidating support among moderates eager to blunt the advance of Sanders, who could take a potentially insurmountable lead in the all-important delegate count after Super Tuesday.

Biden has been riding high with key endorsements that built into a political crescendo on Monday.

He took the stage at a rally in Dallas, Texas joined by Minnesota Senator Amy Klobuchar, who told the crowd she was ending her campaign and endorsing Biden for president.

Biden later introduced Beto O'Rourke, who made a big splash early in the Democratic race but then fizzled out. O'Rourke remains popular in Texas, the state with the largest delegate haul on Tuesday after California.

"We need somebody who can beat Donald Trump (and) in Joe Biden we have that man," O'Rourke said, peppering his short speech with Spanish.

Hours earlier Pete Buttigieg, the 38-year-old former mayor of South Bend, Indiana, threw his support behind Biden a day after quitting the race himself.

"I'm looking for a president who will draw out what is best in each of us," Buttigieg said in Dallas, with the former vice president at his side.

Biden appeared reinvigorated by the support, and he repeatedly flashed his million-watt smile.

But he delivered a tough message intended to warn voters away from the seductions of Sanders, who has called for nothing less than a "political revolution" in America.

"Most Americans don't want the promise of a revolution," Biden told supporters. "They want results. They want a revival of decency, honor and character."

The trio of endorsements could be political gold for a resurgent Biden.

His campaign was on life support after disappointing showings in the first three state contests, but he is suddenly the main challenger to Sanders on the biggest day of the primary campaign.

Buttigieg had strong showings in predominantly white early states but was unable to mobilize black and Hispanic support.

Klobuchar's campaign never gained traction. By endorsing Biden, she could deprive Sanders of a large delegate claim in her home state of Minnesota on Tuesday.

New York billionaire Mike Bloomberg, who on Tuesday competes in his first primaries, has also spread his message to voters in a lavish multi-state ad blitz.

Flush with money for ads, an extensive organization, and momentum in the polls, Sanders has focused on multiple states including delegate-rich California, Tuesday's biggest prize.

In Utah, he said there was "a massive effort" trying to stop his campaign.

Among his backers is Jessica Chadwell, 24, who works for Planned Parenthood in Burlington, Vermont, where Sanders served as mayor decades ago.

"He is fighting for all these things the younger generation needs: fair pay, affordable housing, equal rights," she said.

Biden hopes his newfound momentum can carry him through Super Tuesday with a delegate count close to Sanders, if not the outright lead.

The former vice president to Barack Obama says his strength with blacks, Hispanics, women and suburbanites will show in the coming contests.

Though Klobuchar joined Biden's camp, Sanders has launched an appeal to to her voters.

"I hope her supporters will join us in our fight to defeat Donald Trump in November and win real change," Sanders tweeted, before holding a rally on Klobuchar's home turf.

Third-placed Bloomberg is competing against Biden for moderate voters and campaigned in Virginia on the eve of Super Tuesday.

Bloomberg has spent an unprecedented $500 million of his own fortune saturating the airwaves with TV spots.