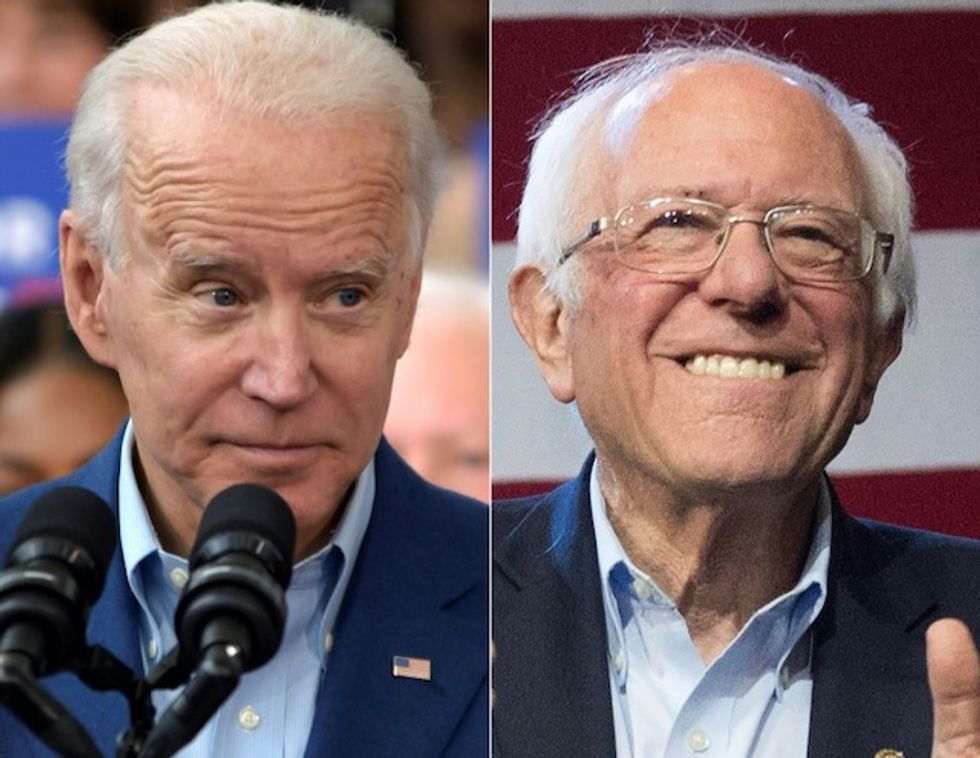 US Democratic presidential candidate Joe Biden, surging in the polls and with several weighty endorsements in his pocket, and rival Bernie Sanders hit the campaign trail in Michigan on Monday on the eve of a primary vote in the key battleground state.

Biden, 77, was joined at an event in Flint, Michigan, by Cory Booker just hours after the New Jersey senator and one-time presidential hopeful announced he was throwing his support behind the former vice president.

Michigan is the biggest prize of six states that hold primaries on Tuesday to decide on a Democratic candidate to face Republican incumbent Donald Trump in November.

Speaking at the event with Booker in Flint, Biden said Michigan "is an important contest not just for the Democratic primary.

"The outcome of Michigan in November may determine who the next president of the United States is going to be," he said.

"We're not looking for a revolution," Biden said in a jab at Sanders, the 78-year-old senator from Vermont who is a self-described democratic socialist.

"What we ought to be able to do is trust the water that comes out of the pipes," Biden said in a reference to a drinking water pollution crisis gripping Flint for the past six years.

Sanders was campaigning in Detroit, Michigan, on Monday and held a roundtable with experts on the coronavirus, which has left at least 26 people dead in the United States and sent stock markets plunging.

"Donald Trump does not have a natural ability to understand the coronavirus and his reckless statements are confusing people in this country and all over the world," Sanders said.

Booker, the charismatic former mayor of Newark who dropped out of the race in January, is the latest prominent African-American politician to back Biden's bid for the White House, his third following unsuccessful runs in 1988 and 2008.

California Senator Kamala Harris, who ended her campaign for the nomination in December, also endorsed Biden, who served for eight years as vice president to Barack Obama, America's first black president, as did another also-ran, former Massachusetts governor Deval Patrick.

Booker and Harris, both touted as possible vice presidential picks for Biden, were to join him for a "Get Out the Vote" rally in Detroit on Monday evening.

Biden has surged since scoring a decisive victory in the South Carolina primary on February 29, with endorsements from key African-American leaders helping him claim the frontrunner mantle in the race.

Massachusetts Senator Elizabeth Warren, who dropped out of the race last week and has a sizeable following on the left, has yet to decide whether to endorse Biden or Sanders.

Tuesday's primaries will be the first one-on-one duel between Biden and Sanders since all the other major candidates dropped out of the grueling nomination battle that began more than a year ago.

Besides Michigan, Democrats will also be voting in Idaho, Mississippi, Missouri, North Dakota and Washington.

Michigan is shaping up as a must win for Sanders, who narrowly won the state over Hillary Clinton during his failed 2016 bid for the Democratic nomination.

The latest polls for Michigan, however, have Biden with a lead of between 15 and 20 points.

The latest Missouri poll has Biden up there by nearly 19 points while he leads Sanders by a narrow two-point margin in Washington.

Sanders, desperate to reboot his campaign after losing 10 of the 14 states which voted on Super Tuesday last week, cancelled plans to speak in Mississippi, Missouri and Illinois in order to focus on Michigan.

Jackson endorsed Sanders at a rally on Sunday in Grand Rapids, Michigan, repaying the Vermont senator for having supported his 1988 bid for the White House.

Biden's Super Tuesday surge brought an influx of donations -- $22 million in the past few days, his campaign said in a statement Sunday.

It said $12 million would be spent on hiring new staff and launching a major media campaign in battleground states.