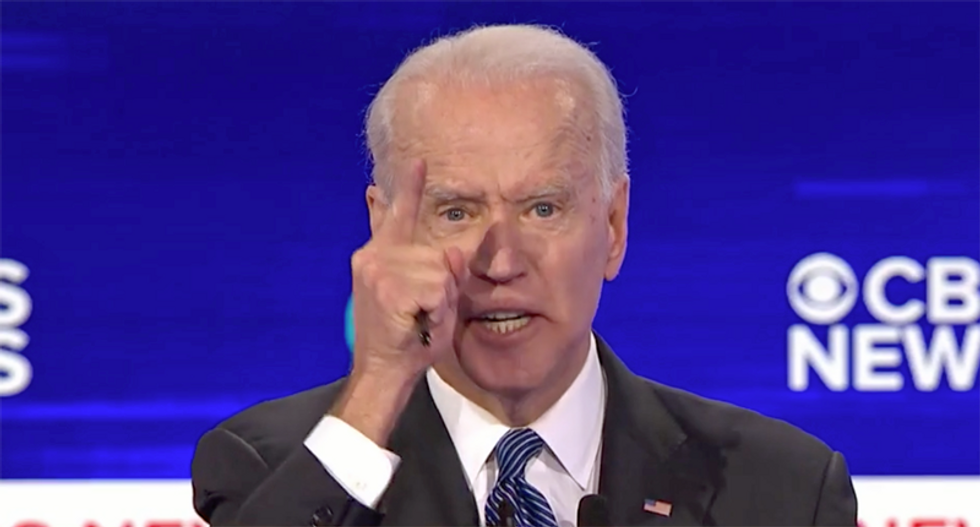 Joe Biden moved a step closer on Tuesday to a November showdown with Donald Trump, notching up big primary wins over Bernie Sanders, his sole remaining challenger for the Democratic presidential nomination.

Biden, 77, the centrist former vice president, scored a resounding win in Michigan, where Sanders, 78, the leftist senator from Vermont, had hoped to make a stand.

He also cruised to victory in Missouri, Idaho and Mississippi.

The race was too close to call in Washington, the other major prize at stake, while North Dakota was also still counting votes.

Addressing supporters in Philadelphia as his victory took shape, Biden struck a presidential tone as he declared on national television that he would lead "a comeback for the soul of this nation."

"We're bringing this party together," he said. "Tonight we're a step closer to restoring decency, dignity and honor to the White House."

Biden reached out to his sometimes bitter rival Sanders and his supporters, telling them "we share a common goal."

Biden's huge victory in Mississippi, where he won around 80 percent of the vote, reflected his popularity among strategically vital African-American voters. He defeated Sanders by 25 points in Missouri.

His win in Michigan, the Midwestern industrial state which could be a key battleground in November, was a major setback for Sanders, who narrowly beat Hillary Clinton there four years ago.

Barring surprises, Biden now has a clear path to becoming the Democratic standardbearer in a potentially bruising and deeply divisive matchup with Trump.

The main question remaining is whether Sanders, a self-declared democratic socialist, will fight to the bitter end as he did four years ago against Clinton or bow out early.

Many Democrats accuse the firebrand Sanders and his devoted supporters of damaging Clinton just as she was struggling -- ultimately unsuccessfully -- against the Trump insurgency.

But his press secretary indicated he had no intention of pulling out, touting Sunday's next debate as the chance for America to "see Biden defend his ideas or lack thereof."

Alexandra Ocasio-Cortez, the charismatic New York congresswoman who is one of Sanders' most high-profile supporters, said there was no "sugarcoating" the results, however.

"Tonight's a tough night," she said.

Adding to nerves in a country on edge after three tumultuous years under Trump, fears of the coronavirus epidemic prompted both campaigns to cancel rallies planned in Cleveland, Ohio.

Organizers of the upcoming television debate between Sanders and Biden likewise said they would take the extraordinary step of not allowing the usual live audience.

Their caution was at odds with Trump, who has vowed to keep holding his typically raucous rallies despite the concerns about large gatherings.

Trump's campaign manager dismissed Tuesday's results, saying "it has never mattered who the Democratic nominee turns out to be."

Both are "running on a big government socialist agenda" and Trump "is on an unstoppable drive toward re-election," campaign manager Brad Parscale said.

For Biden, Tuesday's six-state contest, coming a week after his strong Super Tuesday performance, demonstrated that his once shambolic campaign is gathering strength and is now ready to face Trump.

Michigan in particular, which Trump narrowly won in 2016, was targeted by Biden as a place to put down a marker ahead of the November election.

Sanders had accused Biden of selling out to corporate interests and ignoring a passionate leftist base.

But the former vice president has insisted on steering a centrist line that he says can bring the divided country back together.

Banking on his credibility as Obama's vice president, he has managed to get out an enthusiastic black vote.

With stories of a hard-knock childhood frequently featuring in his speeches, Biden also wants to recapture the blue collar white voters that Trump successfully poached from the Democrats in 2016.

"Biden is putting together the traditional Democratic coalition, and that's still a very powerful one," said Julian Zelizer, a professor of political history at Princeton University.

In another boost, Andrew Yang became the latest of a string of former rivals for the Democratic nomination to endorse Biden.

He was speaking at an under-construction automobile plant in Detroit, when he was confronted by a worker who accused him of planning to take away Americans' firearms.

In the startling exchange, Biden struck back, telling the worker he was "full of shit" and insisting that he supports the constitutional right to bear arms.

"I'm not taking your gun away," he said in the encounter, which Trump backers pointed to as evidence of Biden's inability to stand pressure -- but his own supporters saw as a show of mettle.