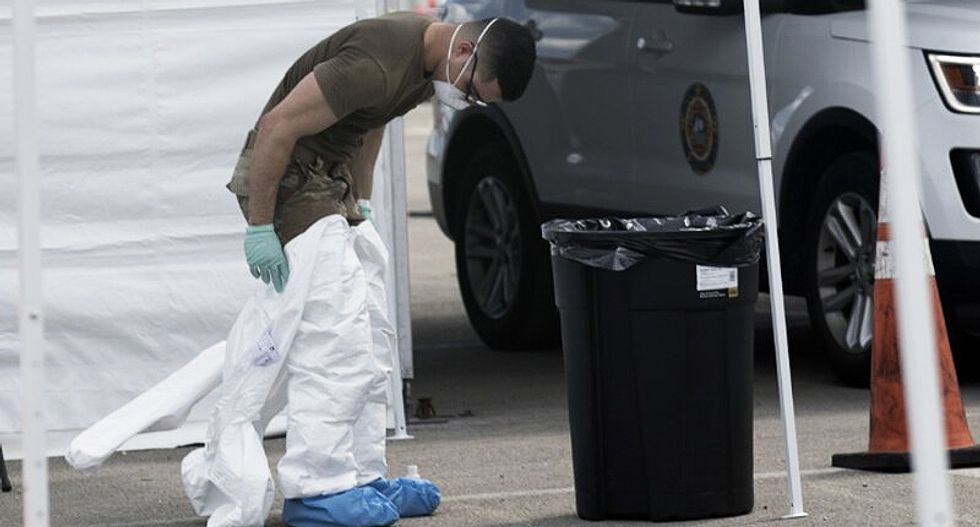 A member of the Florida National Guard doffs personal protective equipment at the end of his shift at Community Based Testing Site, Hard Rock Stadium Miami Gardens, Florida, March 22, 2020. FLNG medics prepared extensively to respond to the COVID-19 virus. (US Army photo by Sgt. Leia Tascarini)

The U.S. Navy is known for sharing close quarters, which is creating a horrific breeding ground for outbreaks of the coronavirus. One sailor is sounding the alarm about the disinfection of a ship experiencing an outbreak.

Onboard the littoral combat ship, the USS Coronado, docked in San Diego, the first infection was March 16, when a chief began feeling sick. He was sent home, but ten days later, nine other members of the crew tested positive for COVID-19 too, The Navy Times reported.

“It was a total sh*t-show,” said a sailor familiar with the outbreak on Coronado. “Everybody started getting sick. I felt like the right thing to do was get everybody off the ship, test everybody whether they were sick or not. Then put the people who were fine on a barge next to the ship, bring on the people in HAZMAT suits and have the ship cleaned professionally.”

That isn't what happened, though. Sailors were given buckets and bleach and told to wipe down things.

“It was 100 percent botched: The whole thing,” the sailor said. “The Navy always says its number one asset is its people? Not on Coronado.”

The Coronado was slated to conduct its four-year, mid-life complex overhaul and refueling, known as an "underway period." It was postponed until the coronavirus crisis is under control.

The Coronado is one of many ships that are fighting off the virus. The captain of the nuclear aircraft carrier the USS Theodore Roosevelt is begging for help after under 200 of his crew tested positive for the virus. When an outbreak began on the USS Boxer, sailors and officers were packed into a room, against CDC regulations, and told to social distance.

The Navy Times noted that the outbreaks on the ships are now raising questions about the military's readiness.

"The rate of infection among the military is outpacing the U.S. civilian population," The Times wrote. "And with experts saying the virus could be with us for more than a year until a vaccine can be developed and deployed, the military is gearing up for a long war the likes of which it hasn’t dealt with since at least the 1918 Spanish Flu epidemic."

"Acting Navy Secretary Thomas Modly acknowledged the Navy is facing a proportionally larger outbreak than the other services," the report said.

The Department of Defense ordered the isolation of critical troops and commanders to ensure that "in the event of a sudden security crisis, including any potential nuclear mission," enough healthy military servicemembers and leaders will be on hand to handle the crisis, CNN reported Monday.

Secretary of Defense Mark Esper told reporters last week that commanders and senior enlisted would have say over the measures put in place.

“At the end of the day, though, given all the different scenarios and factors that each one of you and us face, I trust upon our commanders and our senior enlisted personnel to do the right thing particular to your unit, to your situation, to your mission," Esper said. "It’s up to the commanders and senior NCOs to make the right calls relevant to their situation to ensure that we protect our people while at the same time maintaining mission readiness.”

That has meant a deluge of responses from military leaders and commanders and confusion in the ranks.

The Military Times reported that they got dozens of letters in the past week from service members saying they're going home to their families when they haven't been observing social distancing rules set by the CDC.

“It is a nightmare,” one sailor in Pensacola, Florida wrote. “My wife is having anxiety attacks because she doesn’t know what I’m bringing home – we’ve got kids. They need to all-stop. Shut it down. It’s a training command, man. They’re going to wait for someone to get sick or die before they realize something has to be done.”

According to the sailor, command isn't "telling us anything. It’s almost like we’re in communist China because they’re acting like there is nothing wrong.”

The sailor said that there are about 150 to 250 sailors coming from Navy Boot Camp who have traveled through airports and been on airplanes. While they are screened for coronavirus, they're packed into rooms to deal with paperwork.

“We’re trying to spread them out as much as possible, but the seats are maybe two feet apart and we’re supposed to be maintaining six feet,” the sailor said.

After that, the boot camp students are put in classrooms for 25-28 sailors and it's impossible to keep them six feet apart.

“There is no way to logistically mandate social distancing,” the sailor continued. “You’ve got big desks with computers that are where they are and they don’t move. You’ve got students marching in formation. PT has stopped because a [message] that came out. It’s literally like the chain of command is purposely keeping people in the dark.”

By Monday, it was revealed that 569 service members tested positive for COVID-19 but thus far only 26 have been hospitalized.

Read the full report from The Navy Times.