Cartoon Trump: 'The markets are supposed to jump up and down! That means they're excited!' 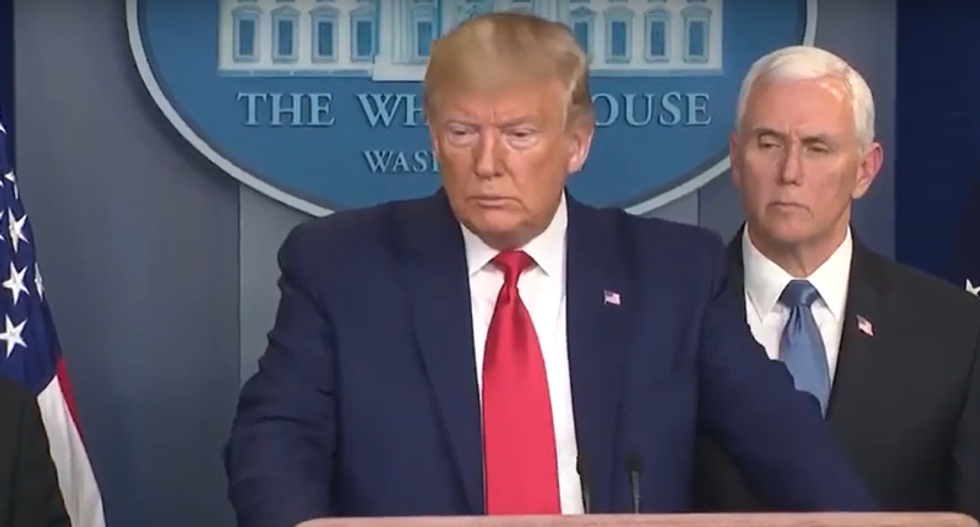 President Donald Trump's cartoon avatar appeared in the fake press briefing room Sunday evening to explain that everything was fine, and people shouldn't panic over the coronavirus.

With sweat dripping off of his orange face, cartoon Trump was excited about the disaster, saying it meant he could work from home in his pajamas.

"What an exciting time to be barely alive!" he exclaimed from the podium.

When cartoon Vice President Mike Pence took to the podium, he explained that in troubling times he turns to the Bible. Trump then interrupted because he was bored.

"What can the American people do to stay safe?" a reporter asked.

"First, stop voting for Joe Biden in the primaries. Those ballots are petri dishes. And second, wash your hands thoroughly like I do, by rubbing them in freezing cold water long enough to recite your screaming match with Tony Little at the Palm in '92."

"Have you been tested for coronavirus?" another reporter asked.

"No need! Sure I've shaken hands with several dozen people who are quarantined, but the Surgeon General gave me a pregnancy test, and I passed, and he said I'm in the clear," cartoon Trump responded. "Note that until the threat has passed, the CDC is advising people to avoid shaking hands or checking people's 401ks."

"Are you worried that the outbreak will further destabilize the markets?" another reporter asked.

"Nooooooo!" cartoon Trump said. "The markets are supposed to jump up and down! That means they're excited!"

In the end, Sen. Ted Cruz (R-TX) came out of quarantine, sweating, coughing, and red-eyed, shaking the sweat off of him like a dog. Trump declared it the apocalypse and said it was "every man for himself."

Watch the cartoon presser below: