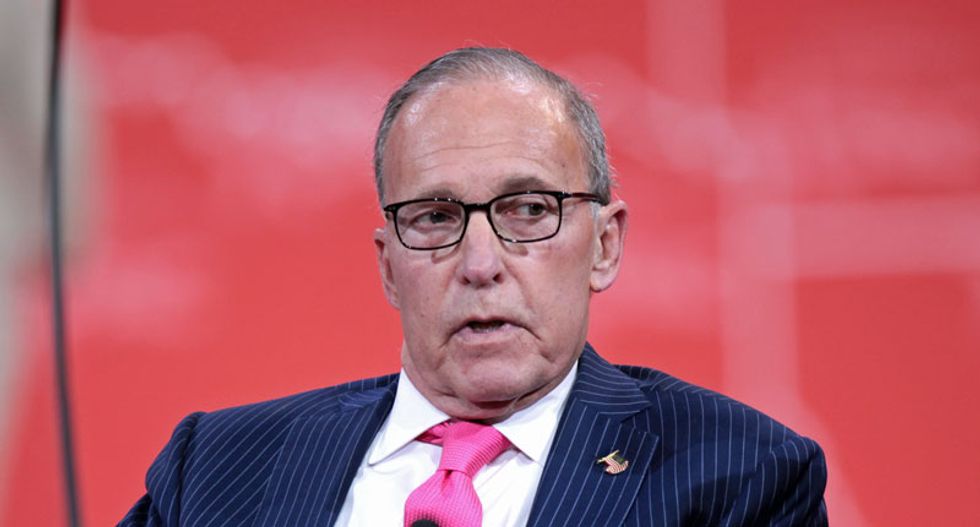 President Donald Trump's top economic advisor Larry Kudlow was sidelined recently after lying on his former network, CNBC, falsely claiming the coronavirus was "contained" – and almost "airtight" – in a blatant attempt to protect the administration. He was wrong.

Kudlow is back on TV, this time on Fox News, to once again protect and applaud President Donald Trump.

In a stroke of midnight tweet Trump made clear he values the health of the stock market over the health of the American worker, and strongly implied he wants people to go back to work, despite the deadly coronavirus pandemic.

"We can't shut in the economy," Kudlow told a Fox News anchor, who had just mischaracterized remarks made earlier Monday by NY Governor Andrew Cuomo. "The economic cost to individuals is just too great."

"The President is right. The cure can't be worse than the disease, and we're going to have to make some difficult trade-offs," he insisted, making clear that the deaths of hundreds of thousands or possibly millions of Americans (per a federal government report) is just a "difficult tradeoff" for returning the stock markets back to their previous levels.

Kudlow's remarks were not well-received.

Serious question: Has Larry Kudlow ever been right about anything? https://t.co/SicpklmpFH
— Aaron Rupar (@Aaron Rupar) 1584979186.0

This is a deeply stupid, deeply false choice. The economy is not going to work if we don't solve the public health… https://t.co/jqqFDl2OnI
— Todd Schulte (@Todd Schulte) 1584980165.0