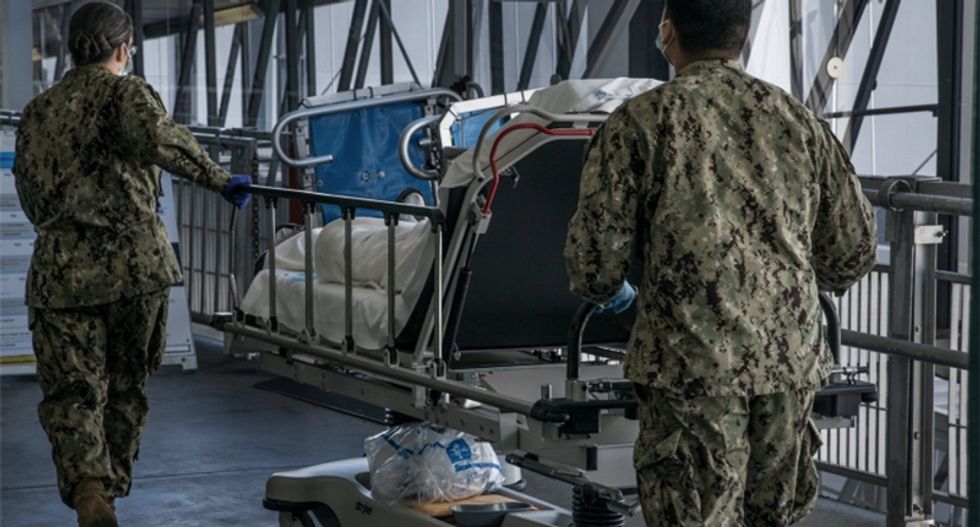 Coronavirus trutherism is the latest byproduct of the COVID-19 outbreak. Conservative conspiracy theorists have posted strategically angled photos and videos to prove the coronavirus crisis is fake. Some are even taking photos of hospitals in areas of the country where the crisis hasn't even surfaced yet to prove that there isn't a problem.

She joined the chorus of those asking for photos and videos of the Torrance Memorial Medical Center in Torrance, California, just south of Los Angeles. The city had 9 cases of coronavirus 4 days ago. The conspiracy theorist claimed that it was an LA hospital that reporters said were "overrun" with coronavirus cases.

Inside Los Angeles, by contrast, is later to the crisis than San Francisco, but the city is already shut down.

The empty streets of Downtown Los Angeles. #Coronavirus cases in #California are now past 5000 and hospitals are fi… https://t.co/75GWRFWGk8
— Danielle Robertson (@Danielle Robertson)1585518032.0

Pop-up emergency tents are being set up:

Patients without coronavirus are being moved to the USNS Mercy so local hospitals can focus on the COVID-19 patients.

Other conspiracy theorists have followed with their own photos. One person taking photos of Baylor Scott & White Medical Center, in Grapevine, Texas. The country has 15 reported cases of coronavirus.

Another person replied to the tweet with their own photos of an unnamed hospital the person said was in Los Angeles. Other photos from the person's account show the person north of Pasadena, California, which is far northwest of Los Angeles.

Conservative Todd Sterns reported from a Brooklyn hospital where he said the media reported a "war zone." He didn't go inside or show the cones blocking the entrances, but he walked around on the sidewalk outside of the hospital. He didn't approach the tents that were visible in the video nor did he walk around the other side of the building.

Right-wing commentator Candace Owens tweeted it asking if "this is what New York hospitals looked and sounded like on 9/11."

The NYT has been reporting that conditions at NY hospitals are an “apocalyptic war zone”. Today they reported that… https://t.co/qpszqnwFG3
— Candace Owens (@Candace Owens)1585497298.0

As a fact-check, the hospitals in New York on Sept. 11 were not chaotic nor were there floods of people, according to one doctor. When the buildings fell, there weren't survivors unless they'd already escaped.

But when CNN investigative reporter Andrew Kaczynsky saw the video from Starnes, he started looking for other areas of the hospital the conservative claimed to be.

He noted that the hospital shows was the same one where another video went viral because there were bodies being loaded into a refrigerated truck.

Photos show what was going on outside on the other side of the hospital:

According to actor Jeffrey Wright, Starnes was offered an opportunity to investigate the makeshift morgue. He hasn't indicated if he intends to go and film his experience.