In the summer of 1940, millions of Parisians fled the French capital in a matter of days to escape the advancing German army. Eighty years after “l’exode de Paris”, an exhibition at the Liberation of Paris Museum puts a neglected part of French history in the spotlight.

Bumper to bumper, roads thick with vehicles and their human cargo, they fled in the millions. Some wheeled bicycles laden with possessions. Others carried cardboard suitcases bound with string. Children helped push carts piled high with bags and bedding. Others carried canaries in cages or were covered in heavy fur coats.

Two million Parisians poured out of the capital in the early days of June 1940, swelling the numbers of those already on the road to eight million, a mass movement of people that promptly became known as “the exodus”.

The Parisians had packed in a panic, fleeing the advancing German army. They’d seen footage of the bombings in Spain. They’d heard the rumours about the Germans – that they were vicious brutes who would rape the women and cut their children’s hands off. And many were still traumatised by the memories of the First World War, when France’s Western Front saw years of trench warfare and the deaths of 1.3 million men.

The affluent residents of the city's 8th and 16th arrondissements (districts) were the first to leave. They fled by car with their mattresses tied to the roofs. Others sat tight and waited for instructions from their bosses. But soon, they too, gripped by the contagious fear, packed up and left, seeking to put as much distance between themselves and the Germans as possible. 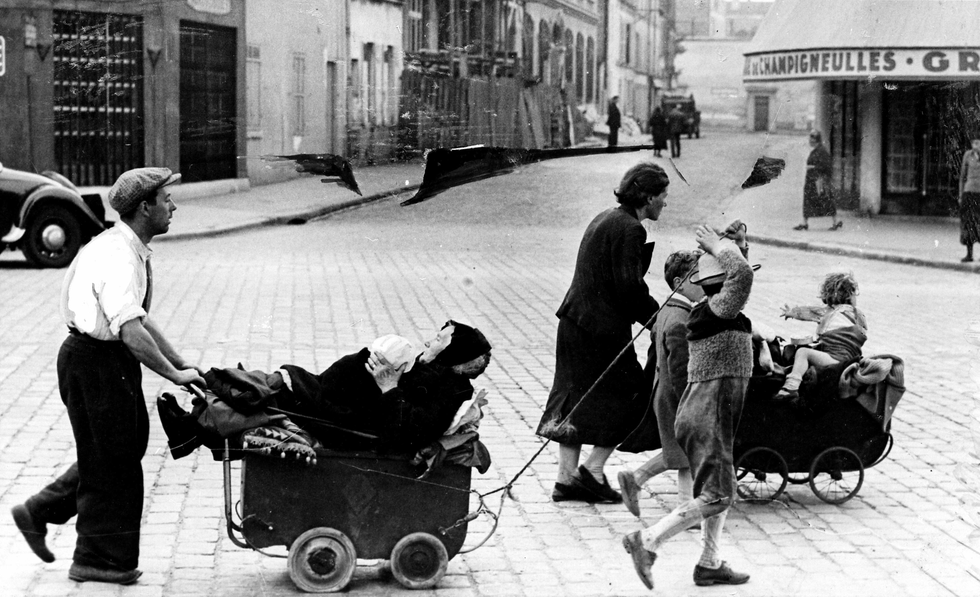 A family flees Paris in June 1940 with all their worldly goods. © Roger Viollet

Only the elderly and the infirm remained, along with those, such as Paul Léataud, who were “determined to stay” and didn’t want “to risk finding nothing left when I get back”.

The Liberation of Paris Museum’s first temporary exhibition draws on archive material: film reels and photographs, posters and newspapers, drawings and reminiscences to retrace the lives of those who fled.

It vividly captures the scenes of chaos. Photos showing station platforms thick with people trying to catch the last trains out of Paris sit alongside children’s drawings of the crowds at Gare de Lyon.

Harried mothers push bicycles laden with children, crowds gather outside makeshift evacuation notices and newspapers – which were briefly obliged to suspend printing – report on the escalating German offensive throughout Europe. 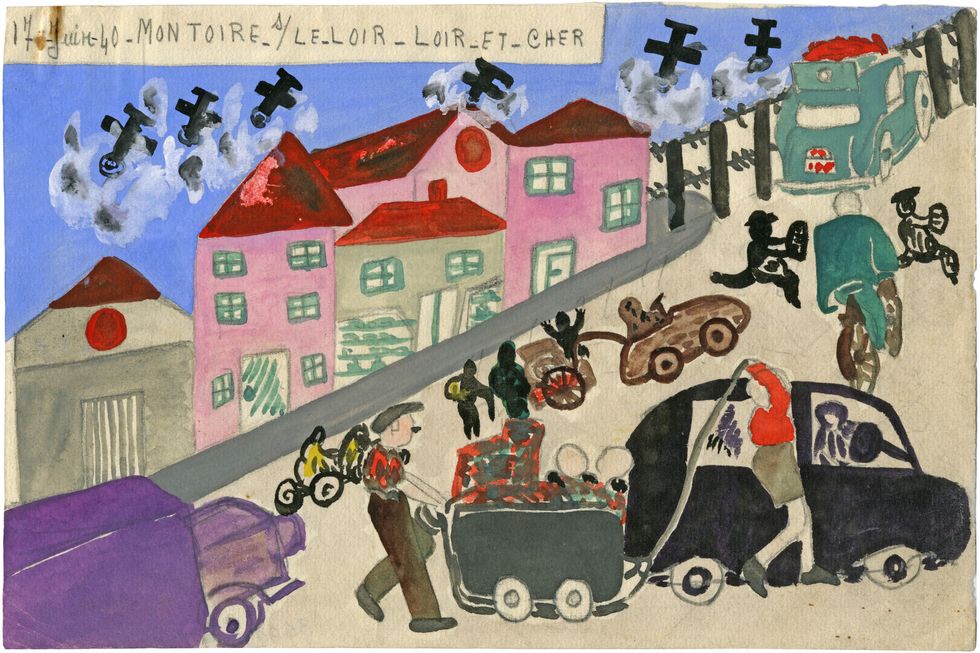 Some scrawl graffiti on walls: “We lost Robert, Going to Poitiers”. Others recalled forgotten children crying by the side of the road or brutality encountered on the route. Some remembered lying face down in ditches or hiding in the woods to cheat death.

The refugees “brim over the pavements and appear to want to fill houses to bursting. All vestiges of apathy, reserve and self-control have gone", recalled Jean-Marc de Foville.

Photos of children carrying gas masks sit alongside aerial shots of a deserted, silent Paris as a seemingly endless line of people snaked out of the capital, and French democracy crumbled in a matter of days.

For the government, taken by surprise by the advancing German army, had made no official evacuation plan.

For months, ever since France declared war on Germany on September 3, 1939, the Western Front had sat quiet and the so-called “phoney war” had lulled the French into a false sense of ease.

But on May 10, the Germans invaded Belgium, the Netherlands and Luxembourg. On June 3, Paris was bombed for the first time.  A week later, the Germans were just 30 kilometres from Paris and the government packed up and left, leaving the Parisians to fend for themselves.

Some fled on foot, others by bicycle as a trail of human cargo wound its way into the French countryside. © LAPI / Roger Viollet

“People were abandoned,” said Diamond, who explained that the exodus had been “glossed over” and buried in the events that followed, the more heroic narratives of Occupation, Resistance and Liberation.

“However we look at it, nobody knew what to do – the government fled… Who wants to hear about a humiliating defeat?”

Once out of the city and when the panic began to dissipate, some refugees described an almost holiday-like feeling of being on the road, a buoyancy that quickly faded when the petrol ran out and food supplies ran short. Cars were abandoned, railway stations were stacked high with lost property, and fur coats were of no use in those warm June days.

Women's faces etched with fear and fatigue during the flight from Paris. © The LIFE Picture Collection via Carl Mydans

Mothers became separated from their children, handing over exhausted toddlers to soldiers in lorries, or to others offering lifts, only to find that soldiers took a different path to the one they had expected.

The Red Cross estimated that some 90,000 children were separated from their parents during the exodus. Family reunions were made even harder to organise by the fact that many of the children were too young to communicate much about their parents, and the babies could say nothing at all.

Some officials, like Jean Moulin, the prefect in Eure-et-Loir, in Chartres, in whose memory the Liberation of Paris Museum is named, refused to leave his post.

Some refugees and French soldiers pillaged villages to survive. Others took advantage of the refugees streaming south with farmers selling glasses of water to those on the road.

But no one exploited the exodus more than Marshal Philippe Pétain, who became chief of state of Vichy France and collaborated with the Nazis in sending thousands of French Jews to the death camps in the years that followed.

‘My heart goes out to you’

As France was poised to fall to the Germans and the refugees continued to make their way south, Pétain was appointed prime minister of France. On June 22, 1940 he signed an armistice with Germany, offering collaboration between the Nazis and his newly appointed Vichy regime, established when the government relocated from Paris to the southern city of Vichy.

But in the uncertain days of June 1940, Pétain, known as the “Lion of Verdun” after his legendary role in the First World War, reassured the refugees that he was with them in their hour of need.

“‘You know, my heart goes out to you, refugees on the road. I'm here with you. I'm not like some who’ve gone to England,” said Pétain, in a dig at Charles De Gaulle, who led French opposition to the Nazis from London. “I’m here, I'm sharing this with you.”

“Pétain was this very well-established figure – and people thought, ‘Now the war is over for us, it’s a return to order’. They didn't know that that would mean an authoritarian regime and German occupation at the time, they were just terribly relieved that their ordeal was coming to an end, and we can really understand that.”

“He did milk it – he was very good at that,” said Diamond, who added that the archives contain hundreds and hundreds of letters from women writing to Pétain during the Vichy regime asking him to be their child’s godparent.

In the days that followed the signing of the armistice with Germany, refugees began to think about going home. Local governments, overwhelmed by the flood of refugees, encouraged them to do so.

A deserted Paris met with no resistance when it fell to the Germans on June 14, 1940. The refugees returned to the French capital to find German troops marching down the Champs-Élysées and swastikas adorning government buildings – and braced themselves for the next chapter in their wartime history: five years of occupation under German rule.