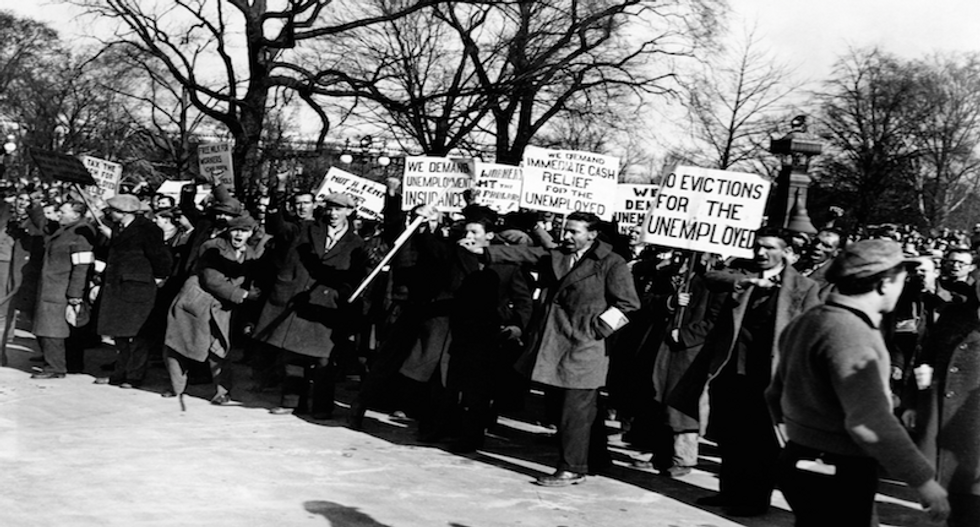 "These are very large numbers by historical standards, but this is a rather unique shock that is unlike any other experienced by the U.S. economy in the last 100 years."

Economists at the Federal Reserve Bank of St. Louis are warning that if the current rate of U.S. job losses continues, the country's unemployment rate could reach a staggering 32.1% by the end of June as the coronavirus pandemic-induced downturn sparks mass layoffs across the nation.

Miguel Faria-e-Castro, an economist with the St. Louis Fed, wrote in an analysis last week that 47 million more workers could lose their jobs by the end of the second quarter of 2020, bringing the total number of unemployed people in the U.S. to 52.8 million. As CNBC noted, that number would be "more than three times worse than the peak of the Great Recession."

Faria-e-Castro's projection of 32.1% unemployment would put the U.S. jobless rate significantly higher than the Depression-era peak of 24.9%.

"The projections are even worse than St. Louis Fed President James Bullard's much-publicized estimate of 30% [unemployment]," CNBC reported. "They reflect the high nature of at-risk jobs that ultimately could be lost."

Faria-e-Castro stressed that "the expected duration of unemployment" could matter more "than the unemployment rate itself, especially if the recovery is quick (and so duration is short)."

"These are very large numbers by historical standards," Faria-e-Castro wrote, "but this is a rather unique shock that is unlike any other experienced by the U.S. economy in the last 100 years."

In response to the St. Louis Fed analysis, HuffPost senior reporter Zach Carter tweeted, "It remains simply incredible that Congress is not even in town during a crisis of this magnitude."

It remains simply incredible that Congress is not even in town during a crisis of this magnitude. An astonishing, b… https://t.co/XfENn2dOpF
— Zach Carter (@Zach Carter) 1585595006.0

"I have been a labor economist for a very long time and I have never seen anything like this," Heidi Shierholz of the Economic Policy Institute wrote in a blog post last week. "Furthermore, this is just the tip of the iceberg."

More than 40 economists surveyed by Bloomberg on Monday said they believe new Labor Department unemployment numbers set for release Thursday will be even higher.

Thomas Costerg, an economist at the investment firm Pictet Wealth Management, predicted that new jobless claims could be as high as 6.5 million while Goldman Sachs estimated 5.25 million.

New York magazine's Eric Levitz wrote Monday that while the "St. Louis Fed's projection is just a rough estimate... there's reason to think its catastrophic prediction is in the right ballpark."

"It's hard not to suspect that most every part of our economic life is going to get worse before it gets better," Levitz added.

US company turns air pollution into fuel, bottles and dresses

At LanzaTech's lab in the Chicago suburbs, a beige liquid bubbles away in dozens of glass vats.

The concoction includes billions of hungry bacteria, specialized to feed on polluted air -- the first step in a recycling system that converts greenhouse gases into usable products.

Chauncey Devega, Salon
On Thursday afternoon my editor asked me what thoughts I might have about the vile quarter of American humanity that includes Kanye West, Donald Trump, Nick Fuentes and now apparently the conspiracy theorist and podcaster Alex Jones

I told him I really had nothing to offer because the whole matter is sad and deeply unpleasant. Ye, as he now styles himself, is mentally unwell, and his behavior is a cry for help. He appears to be mentally decompensating, and serves as a case study in the intersection of racism and health care and how mental illness is often misdiagnosed and untreated in the Black community.

But just because something is sad and tragic and pathetic does not make it less important or dangerous. This is especially true in moments of crisis such as the one America faces in the Age of Trump and beyond. Escaping that dream-nightmare demands a deep familiarity with its horrors if one hopes to exorcise them. We must not and should not look away.

All that balding Indian television executive Athar Rasheed wanted was to look handsome and get married. But the 30-year-old's seemingly harmless hair transplant went fatally wrong.

Women have been judged on their appearance for millennia, but in an increasingly materialistic Indian society, men are also feeling pressure to look young and presentable for fear of losing their social standing.