'He could get squishy on democracy': Bill Clinton’s perception of Vladimir Putin according to recently released public documents 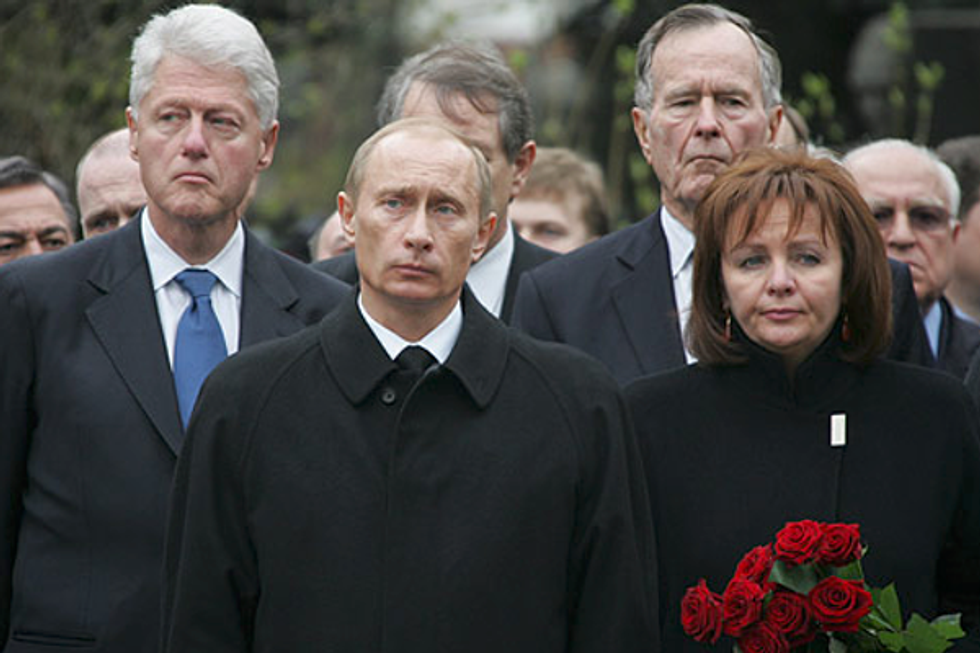 “I think he is a guy with a lot of ability and ambitions for the Russians. His intentions are generally honorable and straightforward, but he just hasn't made up his mind yet. He could get squishy on democracy,”[1]Bill Clinton said of Vladimir Putin in a February 2000 telephone conversation with British Prime Minister Tony Blair. Who was Putin? they wondered.

Putin was clearly different from his predecessor Boris Yeltsin. Clinton and Yeltsin clicked immediately – there was mutual sympathy. Putin was “businesslike,” factual and tough – no small talk, no jokes, no spontaneity. Clinton never called him “Vladimir.”

Newly available Clinton Presidential Library files give readers novel insights and fascinating impressions of Putin’s KGB heritage, his manners, his style, his shrewdness and his ways of manipulation. The files are a treasure trove that are available online and include the verbatim transcripts of the six Clinton-Putin meetings between September 1999 and November 2000 as well as records of their telephone conversations.

Today, Putin has been 20 years in power, and Russia’s recent constitutional changes indicate his willingness to stay in charge even longer.[2]All of this was not predictable when he succeeded Boris Yeltsin as Russia’s President on 31 December 1999. As the new millennium began, US-Russia relations were increasingly strained after NATO’s military operation against the Federal Republic of Yugoslavia during the Kosovo War. US-Russian frictions grew further after Russia’s bombing of Chechenya in September 1999 and the subsequent invasion starting in October of that year. Putin used the Chechen war to overtake his domestic rivals in the campaign to replace the ailing President Boris Yeltsin who praised him in a telephone conversation with Clinton in September 1999: “I found out he is a solid man who is kept well abreast of various subjects under his purview. At the same time, he is thorough and strong, very sociable. And he can easily have good relations and contact with people who are his partners.”[3]Yeltsin wanted Putin to become his successor.[4]

Clinton’s first meeting with Putin took place in Aukland during the Asia Pacific Economic Cooperation (APEC) meeting that month. Putin thanked Clinton for his “unwavering support for cooperation with Russia” and displayed confidence about the future of the US-Russia relationship.[5]The second Clinton-Putin meeting in Oslo in November 1999 had a harder edge on both sides. Russian troops had continued to bombard the Chechen capital Grozny, and there was speculation about an imminent Russian invasion of the entire country. Clinton urged Putin to search for a political solution: “Without a political strategy you'll get the worst of both worlds — people will die, and you will not succeed in ending the conflict.”[6]Putin’s response was “no.” “On Chechnya, the question is how we crush this base of terrorism but take minimal losses. Well, what will be done will be done. We have a solid military strategy. We will attack areas with terrorists. But how can we negotiate with terrorists. The Russian people would never accept this. We need to find those we can deal with,” Putin said.[7]His remarks were typical of what Clinton would come to expect from him. Clinton’s Russia advisor Strobe Talbott recalled: “What struck Clinton most about Putin in Auckland and Oslo was his vigor. ‘I’ll say that for that guy. […] He’s tough and he’s strong and he’s got a lot of energy and determination,’” Clinton said.[8]

At the same time, Putin promised to continue Yeltsin’s legacy. He portrayed himself as a “progressive person.”[9]Bill Clinton was determined to preserve the cooperative US-Russia relationship of the Yeltsin years. In June 2000, Clinton visited Moscow for his first summit meeting with Putin. They signed a joint statement of principles on strategic stability reaffirming the commitment of both sides to pursue further reductions in offensive arms in parallel with discussions on defense systems. Clinton wanted both sides to maintain the Anti-Ballistic-Treaty that Richard Nixon and Leonid Brezhnev had concluded in 1972 trying to avoid a race in anti-ballistic technology.[10]Clinton reiterated this point during his last meeting with Putin in November 2000: “I think we have based our relationship on a win/win premise as opposed to a win/lose framework, allowing us to manage our disagreements. This is not about me anymore, as I won't be here,” Clinton said. Putin simply avoided in-depth discussions on the issue. “This is an unexpected subject, and I will need to think about it further,” Putin drily remarked.[11]Putin wanted to keep his options open. His concern was that the next US administration could withdraw from the ABM Treaty – which George W. Bush eventually did in 2002.

What was the best way to deal with Putin? Bill Clinton and Tony Blair thought that Putin wanted to see America as a partner. Clinton believed “he's very smart and thoughtful. I think we can do a lot of good with him.”[12]Time and again, Clinton searched for ways to cooperate with Russia on issues of global security. In 2000, Clinton’s Middle East peace initiative and the missile talks with North Korea were cases in point. “We have a historic opportunity here, but this is the best we can do. I'll have to work like crazy to sell this in Israel,” Clinton told Putin in a phone conversation on 27 December 2000.[13]Putin very much wanted to participate in the search for a more attainable peace in the Middle East, but he turned into a confrontational mood when Clinton raised Russia’s policy toward its neighbors. Putin launched into a fiery monologue when Clinton expressed concern about Russia’s economic and political pressure on Georgia. “I would like to give you the real situation. I don't know your view, but I think we have good personal relations, and I would like you to try to listen to what I'm saying to you now,” Putin raged. He despised Georgia as a safe haven for terrorists and was mad that Georgia’s President Shevardnadze rejected the deployment of additional Russian troops at the border from Georgia to Chechenya. “We need only to have some order here,” Putin said – and he did not calm down until the end of the conversation.[14]

The Clinton files underline that Putin had different ways to say no. He could camouflage a rebuff or a warning with praise and friendliness, but he could switch into a mode of aggression if he felt criticized.

[10]The memcon of this exchange is not among the cache of documents recently released.

Stephan Kieninger is an Independent Historian and the author of The Diplomacy of Détente: Cooperative Security Policies from Helmut Schmidt to George Shultz (London: Routledge 2018) and Dynamic Détente: The United States and Europe, 1964-1975 (Rowman & Littlefield: Lanham 2016).