Here are all the lies Trump has told about coronavirus 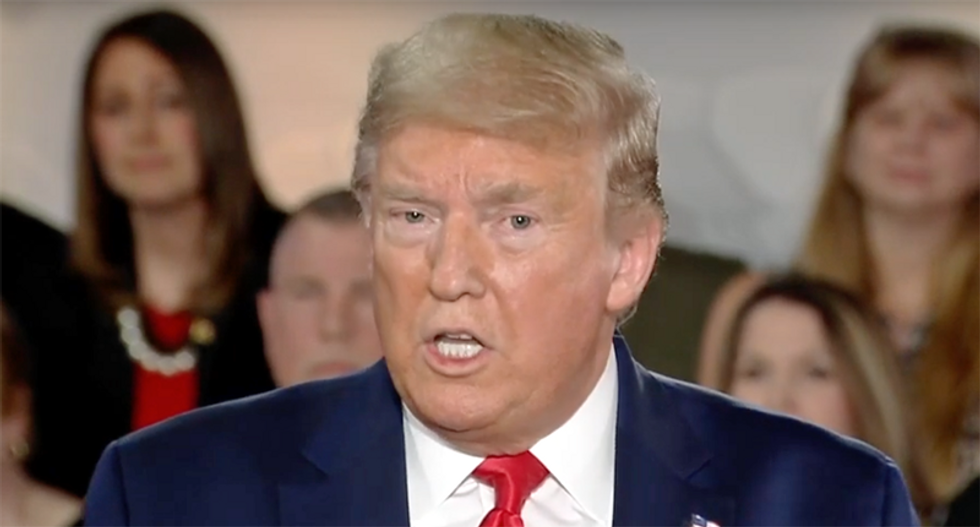 President Donald Trump has spent the entire coronavirus crisis trying to lie, downplay the threat, and shift blame, as public events are shut down across the country and the stock market plunges.

Here are Trump's biggest and most dangerous falsehoods:

Trump has repeatedly suggested that warmer weather in April will wipe out the virus. On February 10, he said that "a lot of people think that goes away in April with the heat — as the heat comes in. Typically, that will go away in April," and then four days later he said, "There’s a theory that, in April, when it gets warm — historically, that has been able to kill the virus."

Flu season generally ends in spring, but that does not mean coronavirus will go away. Currently the virus is spreading in Singapore, where weather is already warmer. And multiple public health officials, including Trump's own CDC Director Robert Redfield, have said the president is wrong.

On February 26, the president said at a press conference that "when you have 15 people, and the 15 within a couple of days is going to be down to close to zero, that's a pretty good job we've done."

Trump had no basis for saying that the number of coronavirus cases in the United States would be "close to zero" within "a couple of days." Since that statement, the number of U.S. cases has only ticked up and is now over 1,000.

At yet another news conference, Trump remarked that the disease itself isn't so bad, saying, “With Ebola, we were talking about it before, you disintegrated. If you got Ebola, that was it. [Coronavirus] is like a flu, and this is a much different situation than Ebola.”

While Ebola is a more virulent disease, its sufferers do not "disintegrate" and many of them survive. More to the point, Trump's own officials have warned that coronavirus is ten times more lethal than the seasonal flu.

In a recent tweet, Trump said, that the coronavirus "started in China and spread to various countries throughout the world, but very slowly in the U.S. because President Trump closed our border, and ended flights, VERY EARLY."

Trump has not actually done either of those things, and experts say doing so would not have helped.

While on a diplomatic trip to India, Trump said, "I think that whole situation will start working out ... We're very close to a vaccine." It's a sentiment he has also expressed in meetings with business leaders.

But it's not true. The CDC says developing a vaccine will take 12-18 months, including fully testing its safety and effectiveness.

Trump has also assured the public that testing for coronavirus is widely available, saying "anyone who wants a test can get a test."

That's not true. There has been a critical shortage of effective testing kits and labs that can run them. Even when doctors recommend tests for patients, they are stuck waiting.

On the flip side, Trump has at other points acknowledged obtaining tests is difficult, but that it's President Barack Obama's fault. “The Obama administration made a decision on testing that turned out to be very detrimental to what we’re doing,” Trump said last week. “And we undid that decision a few days ago so that the testing can take place in a much more rapid and accurate fashion.”

This is false. As one aide to Sen. Lamar Alexander (R-TN) told the Atlanta Voice, the Obama administration did propose expanding FDA oversight of diagnostic tests, but no rule was ever drafted or took effect.

Perhaps the most reckless lie Trump has told about coronavirus was his remark, at a recent rally, that the virus is the Democrats' "new hoax."

Even Trump has since tried to walk back this claim, insisting that he doesn't consider the virus itself a hoax, but that Democrats are blowing it out of proportion to hurt his campaign for re-election.