If Democrats want to beat Trump -- they should hire political comedy writers to make him the butt of the joke: columnist 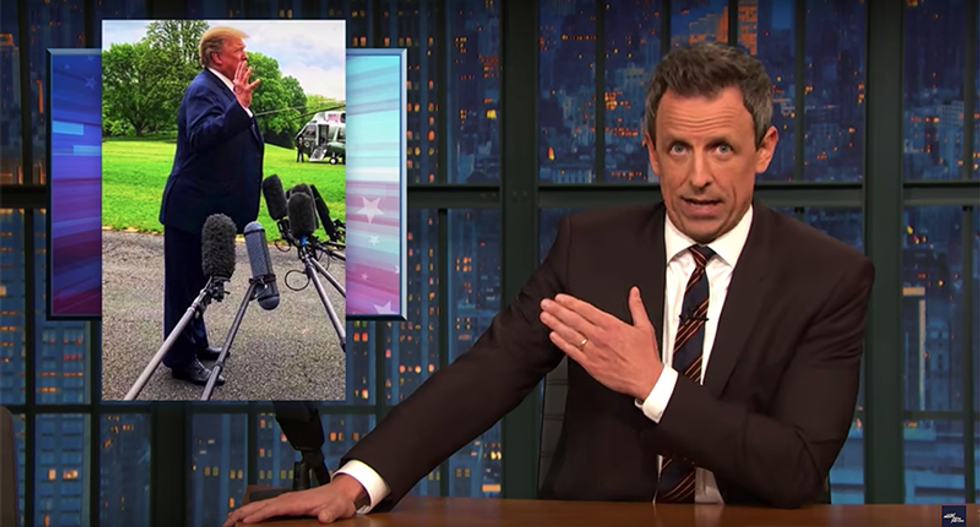 If there's one thing anyone hates it's being laughed at. President Donald Trump, in particular, can't handle it when he's the butt of the joke.

A Washington Post column outlined that one of the best ways to take Trump down is to make him into a joke.

Americans are well aware that Trump isn't the brightest bulb in the tanning bed. Voters know he's a sexist predator and has seen the "Access Hollywood" tape. Not matter how many times Democrats say it, people think that Trump broke the law and agree he probably is continuing to do so. Winning in 2020 isn't about telling people what they already know. The way to take down Trump is with mockery.

"For the past three years, Jimmy Kimmel has offered up snippets of Trump’s speeches, slowed down to half-speed and dubbed 'Drunk Donald Trump,'" wrote Richard Zoglin. "It’s pretty easy comedy, but it perfectly crystallizes the verbally maladroit, physically awkward, deeply weird nature of the man currently occupying the Oval Office."

But it's also the exact same thing that Trump's pals did to House Speaker Nancy Pelosi (D-CA). The difference is that Kimmel makes it clear it's a joke, while the anti-Pelosi video pretends it's real. Facebook has said they won't remove the Pelosi video, giving full license for anyone to upload "Drunk Trump" videos.

"For guidance, I would suggest they look to the people who have zeroed in on Trump’s vulnerabilities more effectively than any of the politicians thus far: the late-night comics," wrote Zoglin.

The late-night monologues from Kimmel, Stephen Colbert, Seth Meyers, John Oliver, Samantha Bee and Trevor Noah have been getting under Trump's skin since the beginning of his campaign. He's attacked them all for "low ratings" or for being "not funny." He's even claimed that they all begged him to do their show.

"Their approaches, in many ways, have mirrored the varied tactics of the candidates," explained Zoglin. "Oliver, like Elizabeth Warren (D-Mass.), is a policy wonk, delivering caustic, well-researched critiques of, say, Trump’s trade policies or his efforts to save the coal industry. Bee is the comedic correlative to Bernie Sanders (I-Vt.) — exploding with outrage at Trump’s inhumane treatment of immigrants and his threat to abortion rights."

Colbert, he argued, often goes for a "relentless skewering" that makes the show like a nightly venting session for the choir. But HBO's Bill Maher has a sense of the anxiety Democratic voters feel.

"A few weeks ago, Maher basically threw up his hands over Trump’s defiance of congressional subpoenas," Zoglin continued. "When he mentioned Congress’s threat to hold Attorney General William P. Barr in contempt and the audience started to applaud, Maher stopped them cold: 'Shut up! It’s not doing any good! He’s the top law enforcement official in the country — who’s going to arrest him, Inspector Gadget?'”

Meyers and Kimmel focus on the basics of human behavior, he explained.

"Much of the time, they simply replay clips of Trump’s loonier rants — the bar-stool bluster, the run-on sentences — with an implied thought balloon: Who can take this man seriously? Meyers’s response to a particularly murky Trump word salad might be a simple 'What are you talking about?' Kimmel shows a clip of Trump at a rally hugging an American flag and marvels, 'Who does that?' When Trump recently told reporters that he is 'the most transparent president probably in the history of this country,” prefaced by 'I think most of you would agree,' Meyers responded with a weary deadpan: 'No. We would not agree. We can see right through you, but I don’t think that’s what you meant'"

Even Trump himself treats rallies the way a stand-up comic would. He riffs on Democrats, whether it's true or not. He deploys mockery, chants and blurts out whatever will get him a laugh or a reaction. His rallies are like a tour where he serves as the angry, smug character with a Cheshire Cat grin.

Pelosi may be the only one who has it figured out, said Zoglin. Her legendary wit came in handy when Trump blew up infrastructure talks. She dressed him down and told his family to consider an "intervention." It got so under Trump's skin that he had to force underlings to take to cable news to promise he was completely calm and a very "stable genius."

"The Democrat who defeats Trump in 2020, I predict, will be the one who recognizes that assertion as the greatest straight line in presidential history," Zoglin closed.