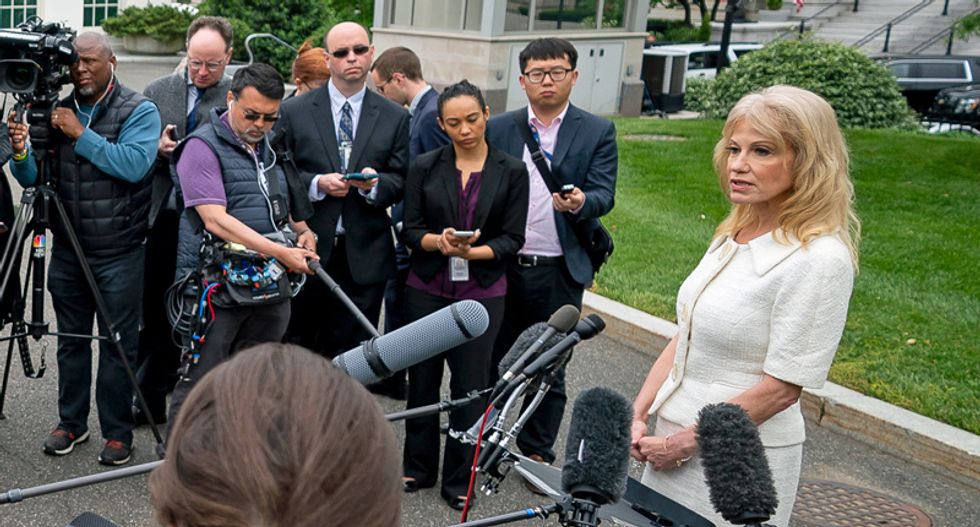 During a gaggle outside the White House on Wednesday, Conway was peppered with questions about staffers who reportedly called COVID-19 the "kung flu" or the "Chinese virus."

"Excuse me!" Conway exclaimed. "Of course it's wrong. But you can't just make an accusation and not tell us who it is."

"If you want to argue, I want to argue about standing away from each other and washing our hands," she added.

"You're telling those staffer that it's wrong?" a reporter pressed Conway.

"That's highly offensive so tell us all who it is," Conway demanded. "I'm not going to engage in hypotheticals. I'm married to an Asian. My kids are partly. My kids are 25% Filipino. You're all so obsessed, I thought you knew."

The White House adviser continued to demand to know who had referred to the virus as the "kung flu" while speaking to an Asian reporter.

"I'm trying to be here to help you help America understand how to slow the spread and you're shouting at me in a way about something somebody allegedly said to somebody else," she complained. "And I'm asking who was it? Why don't we go to the source. I certainly didn't say it, I don't believe it."

"Why don't we go to the source and tell them that's very hurtful and unhelpful for what we're trying to do," Conway concluded, softening her voice. "Pardon me if I've been mistaken that you all are trying to inform America."