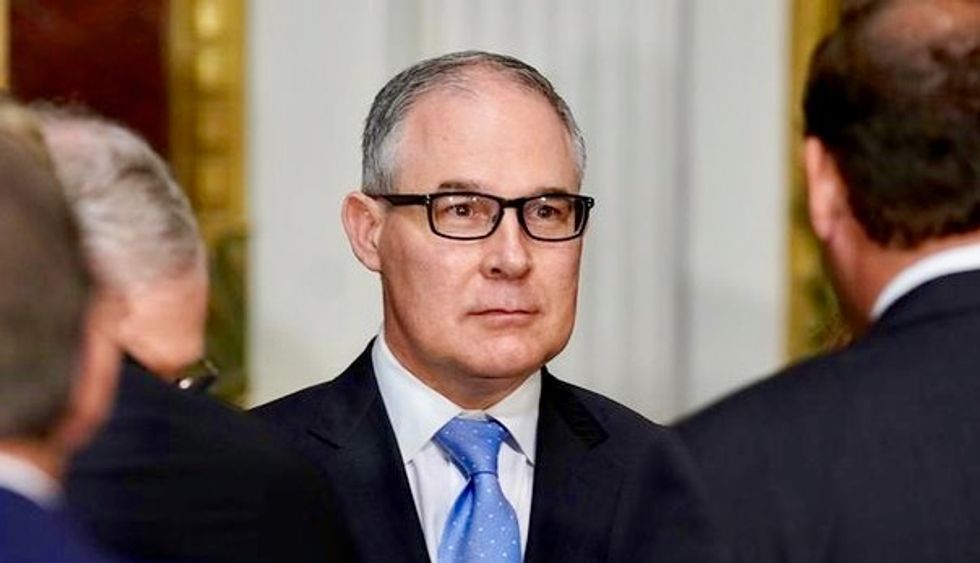 "Now is not the time to play games with critical medical research that underpins every rule designed to protect us from harmful pollution in our air and in our water."

As most political observers were watching the election results in the Democratic primary from 14 states come in Tuesday evening, the EPA quietly published a proposed change to a rule the Union of Concerned Scientists has called "nonsensical and dangerous"—expanding the agency's so-called "secret science" rule to further limit the scientific evidence the EPA will consider in its work.

In what Mother Jones environmental reporter Rebecca Leber called "an incredible news dump" in the midst of a contentious election, the EPA "moved forward its most controversial proposal of the Trump administration."

Under the rule, which was first proposed by former EPA administrator Scott Pruitt in 2018 and is officially called "Strengthening Transparency in Regulatory Science," the EPA cannot use scientific studies to guide its regulatory work unless the underlying data used by the studies is available to the public.

The "supplemental notice" published Tuesday night would expand the rule to apply not only when the agency is considering a new rule or regulation, but to all EPA activities, including when the EPA is sharing "influential scientific information."

As Betsy Southerland, a former official in the EPA's Office of Water, told Bloomberg News, "The EPA couldn't cite a study about sea level rise in coastal communities if the study relies on a proprietary model that's not available for free—'even if it's not used to regulate anything.'"

Critics say the expansion of the proposed rule, which the EPA expects to go into effect later this year, will ultimately downplay the effects of pollutants, chemicals, and other public health threats on communities. Scientists frequently use epidemiological studies to determine how the EPA should regulate such substances, but such research often includes private medical data—which would make the studies off-limits to the EPA under the "secret science" rule.

The rule could have dire implications in the face of a public health crisis like the one currently facing the U.S. and other countries around the world.

"Think of this in the context of coronavirus," Rosenberg told The Hill. "Can you imagine data being the most important thing or do you want scientific research that is robust?"

With many communities across the country facing the effects of pollution from the fossil fuel industry, "Now is not the time to play games with critical medical research," wrote Gina McCarthy, president and CEO of the Natural Resources Defense Council (NRDC) and former EPA administrator under the Obama administration.

The rule could open the door for industry-funded studies to make their way to the EPA for consideration as the agency makes regulatory decisions. Industry scientists could make their underlying data public in the interest of gaining the EPA's favor.

"The 'censored science rule' inherently gives industry an unethical advantage that will contribute to environmental injustice," said Dr. Bernie Goldstein, former chair of the EPA Clean Air Scientific Advisory Committee, in a statement. "For example, consider an impending EPA science based regulation that will affect the extent of emissions to a disadvantaged community from a major industrial source."

"Under this rule," he said, "only one side, industry, can afford to hire consultants whose success is dependent on slicing and dicing the raw data to find trivial issues that can be artfully distorted and magnified."