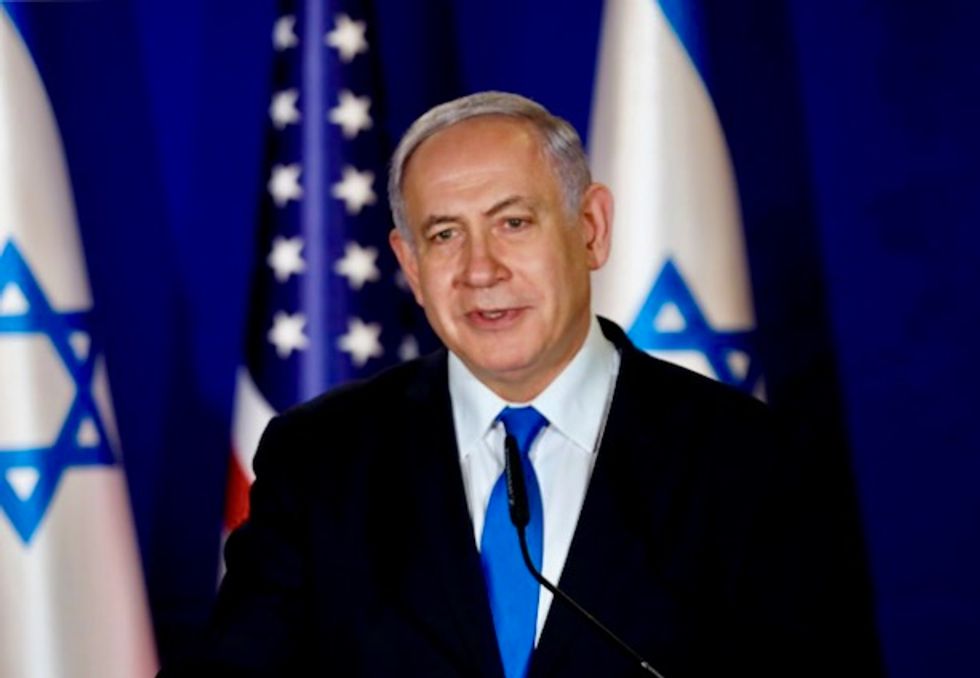 The election, Israel's third in less than a year, was called after inconclusive votes in April and September plunged the Jewish state into political stalemate.

Likud's main challenger, the centrist Blue and White party, was estimated to take 32 or 33.

Those projections mark a major improvement on Likud's performance in Israel's last vote in September, which ended as a stalemate.

Netanyahu tweeted "thank you" after the polls.

"It's a huge victory for Israel," he added.

The estimates give Likud and its right-wing allies, including ultra-Orthodox parties, 60 seats -- one short of a majority.

In a statement, Likud said Netanyahu had spoken with all the heads of right-wing parties and "agreed to form a strong national government for Israel as soon as possible".

Blue and White along with its centre-left allies as well as the mainly Arab Joint List were projected to win between 52 and 54 seats.

AFP / Jack GUEZ Supporters of Netanyahu celebrate after exit polls put his right-wing Likud party several seats ahead of its main challenger, the centrist Blue and White party, in Israel's third election in less than a year

The nationalist Yisrael Beitenu party, which was in the position of kingmaker following inconclusive polls in April and September, was forecast to win between six and eight seats.

The president of the Israeli Democracy Institute think-tank, Yohanan Plesner, said the projections showed that Netanyahu had "won a significant political mandate from the Israeli people".

But, he added, with Netanyahu's trial due to open on March 17, the country was heading towards "unprecedented" legal uncertainty as the likely head of government will be forced to "fight to clear his name in court".

Netanyahu, the longest-serving premier in Israeli history, was formally charged in January with bribery, fraud and breach of trust.

The premier campaigned on his tough position towards the Palestinians and on Jewish settlements in the occupied West Bank.

Bolstered by US support, Netanyahu has campaigned on building thousands more homes in Jewish settlements in the Palestinian territory, even though they are considered illegal by the international community.

The election was being held amid the coronavirus epidemic, with two new cases confirmed Monday -- raising the tally in Israel to 12.

Another 5,600 Israelis are under self-quarantine, many of whom visited countries where the virus is prevalent.

At 18 special polling stations, those under quarantine met election staff in full protective suits and masks.

Voters had to wash their hands and wear gloves before casting their ballots, presenting their ID cards to election officials separated by plastic sheets.