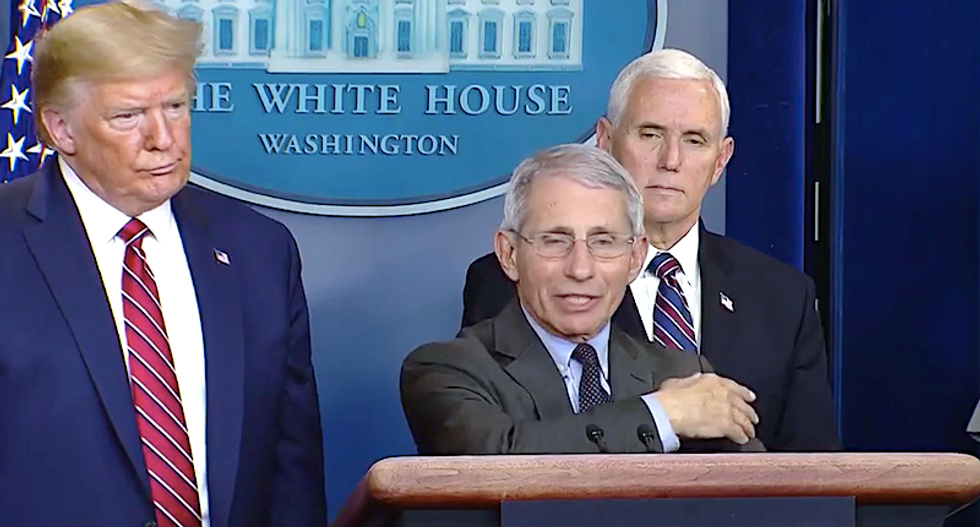 There was one face that was suspiciously absent from Sunday's press conference on the coronavirus threat: Dr. Anthony Fauci.

The expert who has been beside the president for weeks and attempted to calm a nation was caught in an awkward moment Saturday when President Donald Trump attacked the State Department. Fauci rubbed his forehead and shielded his face from the cameras. Whatever it was, it appeared to be a "face-palm" moment responding to the president.

It's unknown if that's the reason Fauci was missing from today's briefing. It could also be that Fauci has been working around the clock on the coronavirus response, and he may have simply needed a day off.

The question "Where is Fauci" was trending nationwide as the press conference came to a close.

You can see the comments and questions from folks below:

Where is Fauci. Everyone figured he would get canned for clarifying that you can’t just use Plaquenil or Azithromyc… https://t.co/OWwUHDfFRR
— Robert Freedland (@Robert Freedland) 1584915094.0

Donald Trump and his merry band of sycophants make me puke! #COVIDIOTS Where is Fauci? Why is Peter Navarro there?… https://t.co/rCoW3iLoNr
— Tim Boyce (@Tim Boyce) 1584917125.0

Where is Fauci? I’m listening to @realDonaldTrump and my BullShit meter alarm when off and pegged past maximum… https://t.co/wxzV3GH9gh
— Nick Knight II (@Nick Knight II) 1584918090.0