Israel seeks end to deadlock with third election in a year 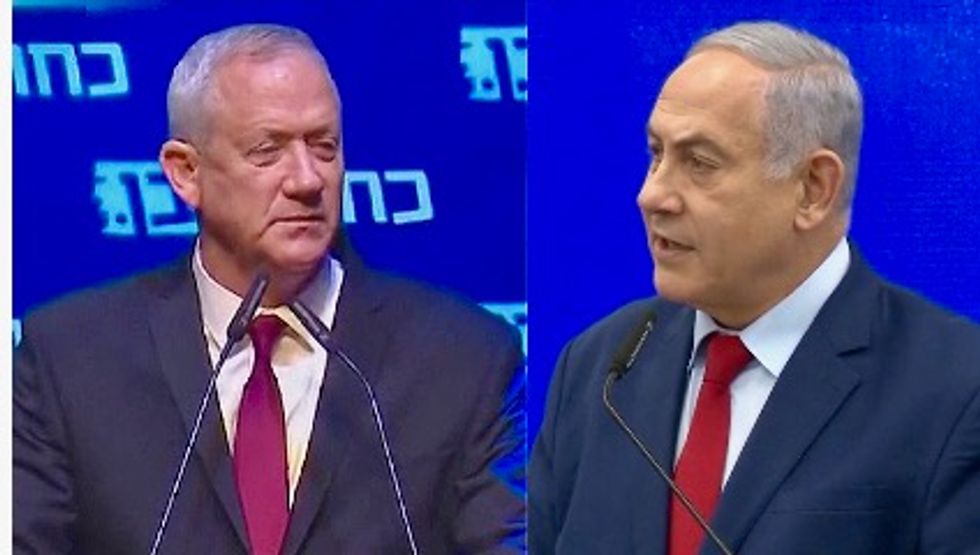 Israel held its third election in less than a year on Monday seeking to break a grinding political deadlock, with Prime Minister Benjamin Netanyahu chasing re-election while facing criminal indictment.

The vote comes just two weeks before the right-wing premier, the longest serving leader in Israeli history, stands trial after being formally charged in January with bribery, fraud and breach of trust.

But final polls indicated that Netanyahu, the first Israeli prime minister ever indicted in office, had not lost support since inconclusive polls in April and September.

Most surveys predict another close race between his Likud and the centrist Blue and White party, led by ex-military chief Benny Gantz.

Both sides are expected to fall well short of the 61 seats needed for a majority in Israel's parliament, the Knesset, and will have to strike deals with smaller parties to forge a stable coalition.

That proved impossible after the last two votes and a further stalemate remains possible, with few undecided in the divided country of 6.4 million eligible voters.

But leaders across the political spectrum have said they are keen to avoid a fourth vote given the damage done by the impasse, as the caretaker government's inability to pass a budget has left key social programmes unfunded.

Netanyahu supporter Ella Levy told AFP that Israel was "flourishing" under the premier's leadership, downplaying the importance of the indictments.

"For me, he is innocent until they prove otherwise," she said at a polling station in Jerusalem.

The 70-year-old premier, who will face trial from March 17, faces accusations including receiving improper gifts worth thousands of dollars and offering a media mogul lucrative regulatory changes in exchange for favourable coverage.

Gantz has been accused of saying little about his vision for Israel, defining himself primarily as Netanyahu's rival.

Blue and White supporter Inbal, who did not want to give her last name, said that Gantz "doesn't really impress" her.

"I honestly think they are losers, Blue and White. But there is nothing else to vote for for people with my opinions," the 27-year-old math student said in Jerusalem.

A number of right-wing parties, including two ultra-Orthodox Jewish parties who last time won 17 seats between them, have already pledged to support Netanyahu.

The Joint List, a coalition representing Israel's Arab minority, won 13 seats in September and backed Gantz, as did a number of smaller left-wing parties.

Bolstered by US support, Netanyahu has campaigned on building thousands more homes in Jewish settlements in the territory.

All settlements are considered illegal by the international community.

Gantz, a security hawk who previously led the Israeli military, has also welcomed the Trump proposals.

Despite backing Gantz, the Joint List has campaigned on opposition to the Trump proposals, which were immediately rejected by the Palestinian leadership.

Faced with static polls, parties have focused their attention on turnout.

But the election is being held amid the coronavirus epidemic, with 10 cases so far confirmed in the Jewish state.

Special polling booths have been erected for the 5,600 Israelis under self-quarantine, many of whom visited countries where the virus is prevalent.

They are not allowed to use normal polling stations and will wear masks while voting.

"It is hard to see what could convince someone who voted twice for the same party to shift this time," said Ofer Zalzberg, an Israeli analyst at the International Crisis Group think-tank.

He said both the left and right had focused on boosting voter turnout.

"The most likely result is we wake up Tuesday morning still stuck without a clear winner."