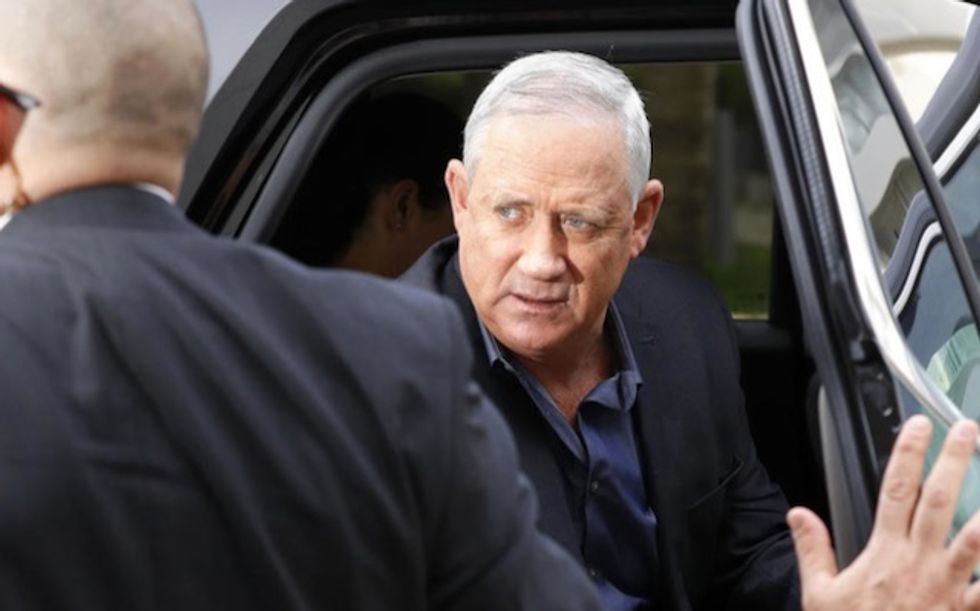 Israel's ex-military chief Benny Gantz was due to be nominated Monday to try to form a government but talks continued with his bitter rival, Prime Minister Benjamin Netanyahu, on an emergency alliance to combat coronavirus.

Gantz, who heads the centrist Blue and White party, won recommendations on Sunday from a thin majority of lawmakers to form a coalition government after almost a year of political paralysis in Israel.

But his path there is difficult given the deep divisions within the factions that backed him, which include the mainly Arab Joint List and the nationalist Yisrael Beiteinu.

Netanyahu -- Israel's longest-serving premier and the first ever to be indicted in office, on graft charges -- has insisted that voters on March 2 elections gave him a mandate to continue as prime minister.

The vote, Israel's third inconclusive election in less than a year, saw Netanyahu's right-wing Likud secure the most seats.

But, along with its religious party allies, Likud fell three seats short of a majority of 61 seats in the 120-member Knesset, or parliament.

President Reuven Rivlin was due to meet Gantz, 60, later on Monday to officially grant him a maximum of 42 days to try to form a government, a task which proved impossible for any candidate following the two elections last year.

Gantz has an "hollow mandate," political columnist Sima Kadmon wrote in the Yediot Aharonot newspaper, referring to the potentially crippling divisions within the anti-Netanyahu camp.

POOL/AFP / GALI TIBBON Benjamin Netanyahu -- Israel's longest-serving premier and the first ever to be indicted in office, on graft charges -- has insisted that voters on March 2 elections gave him a mandate to stay in power

But Rivlin made clear he wants a government in place "as soon as possible," in part to help Israel beat back the COVID-19 pandemic.

He summoned the two rivals on Sunday for an "urgent conversation", which ended without agreement, but Likud and Blue and White said the talks would continue.

After the meeting, Rivlin emphasised the need to "intensify direct contacts... between the Likud and Kachol Lavan negotiating teams, and welcomed both sides' willingness to do so".

But prospects for the two men coming to terms may be remote, especially as mutual acrimony has ramped up in recent days.

A new Knesset will also be sworn in later Monday in a stripped-down ceremony due to COVID-19.

AFP/File / Emmanuel DUNAND A woman at Jerusalem's nearly deserted Western Wall, Judaism's holiest site, after Israel has imposed some of the world's tightest restrictions to contain the new coronavirus

Writing in the left-wing Haaretz newspaper, Raviv Drucker said the pandemic "could be our political establishment's miracle," forcing a compromise that has proved elusive over the past year of political deadlock.

Israel has 250 confirmed cases of coronavirus with no fatalities but tens of thousands in home-quarantine.

Authorities have banned gatherings of more than 10 people and ordered schools, universities, restaurants and cafes to close, among other measures.

Netanyahu, 70, on Sunday proposed a six-month unity government that he would lead to manage the response to the pandemic.

He also offered a four-year arrangement that would see the two leaders equally split the job of prime minister.

But, Barnea added, coronavirus could prove "key to a deal".

AFP / JACK GUEZ Israel has shut down eateries, shopping centres and gyms in a bid to halt the spread of novel coronavirus

Gantz has also previously refused to serve in any government led by someone facing criminal charges, but that was before the coronavirus crisis.

Netanyahu was in January formally charged with bribery, fraud and breach of trust.

His trial had been due to open on Tuesday, but Jerusalem's District Court postponed it to May 24, blaming the pandemic.

The prime minister's rivals cried foul, accusing him of using the coronavirus public health crisis to push back his long-anticipated day in court.