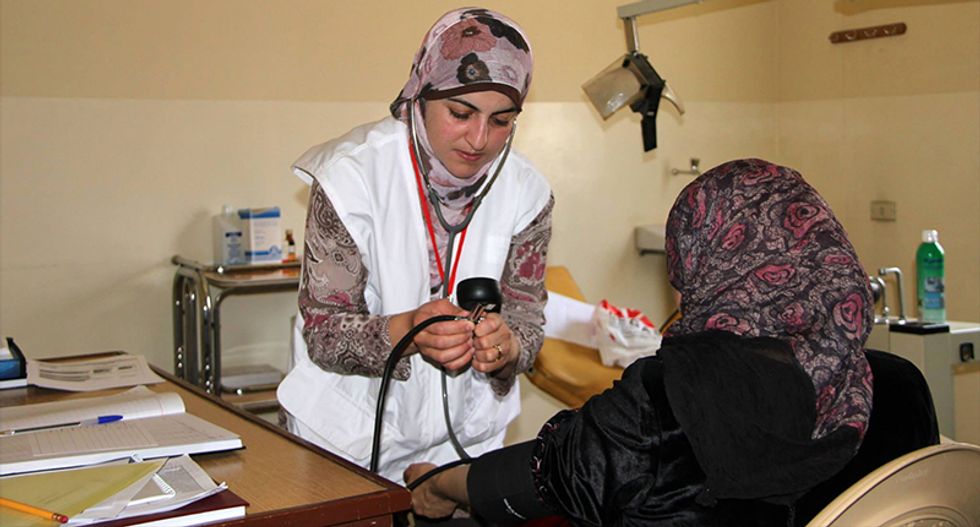 MSF midwife Safia checks the blood pressure of a Syrian patient. The woman is nine months pregnant with her second baby and had only done one check up in Syria during the early stage of her pregnancy. She arrived very recenty to Lebanon and is still unregistered as a refugee. (Photo: Doctors Without Borders/Facebook)

"Any help within reasonable conditions, there's no problem with it in principle," the Shiite movement's chief Hassan Nasrallah said in a televised address.

But he warned that "Lebanon must not fall under anybody's trusteeship or hand over its financial and economic administration" to outside parties.

One of the most indebted countries in the world, Lebanon has been rocked by a months-long political and financial crisis.

The country's pound has tumbled in value and banks have imposed strict limits on dollar withdrawals amid a strangulating liquidity crunch and mass protests against the political class.

Lebanon said last week it would default on its Eurobond debt for the first time, saying that was the only way to shore up its foreign currency reserves.

Banking experts have called for an IMF rescue package, saying it would secure desperately-needed international assistance and reassure creditors.

But the powerful Shiite movement Hezbollah, which along with its allies holds a majority in parliament, has opposed such moves.

It has rejected conditions and "ready-made recipes" which global bodies could impose, warning against what it called "foreign guardianship" over the economy.

Hezbollah is backed by Iran, whose arch foe the United States has a virtual veto on IMF decisions.

The IMF on Thursday urged Lebanon to quickly implement reforms to stabilise the economy.

"Given the severity of economic conditions in Lebanon, it's important that the government designs and implements promptly a comprehensive package of reforms to effectively address the economic challenges and improve Lebanon's economic prospects," IMF spokesman Gerry Rice told reporters.

While the country has not requested aid from the Washington-based crisis lender, "We stand ready... to assist the authorities in those efforts."

Despite a series of crises, the country had never before defaulted, but in recent months it has grappled with its worst economic turmoil since the 1975-1990 civil war.