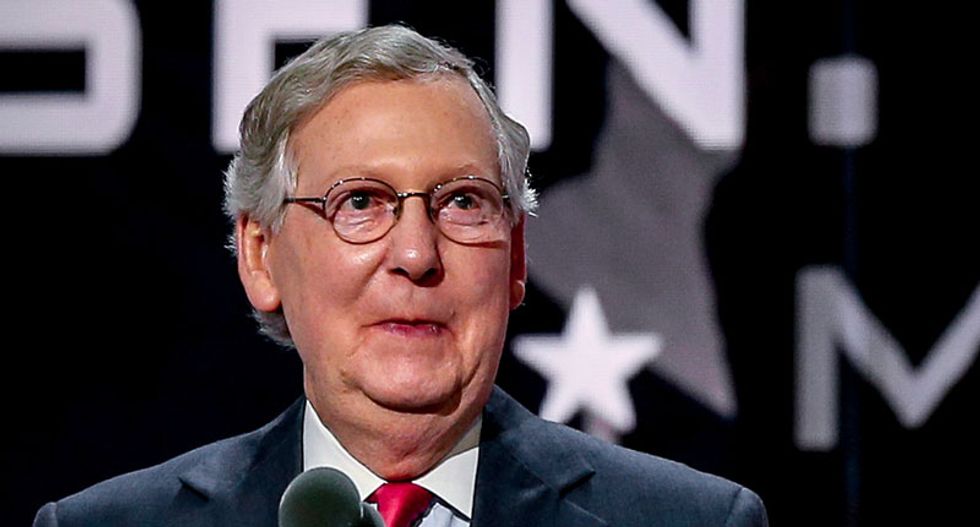 By a vote of 96-0, the United States Senate Wednesday night passed an enormous coronavirus stimulus package that would provide some desperately needed economic relief to struggling workers and the unemployed while establishing a $4.5 trillion fund to bail out large corporations—with little to no enforceable restrictions.

Progressives didn't mince words in response to the unanimous vote, which sends the largest bailout legislation in U.S. history to the Democrat-controlled House of Representatives, where it could pass as early as Friday before heading to President Donald Trump's desk for his signature.

"At the moment when the American people are most in need, our coffers are being looted by the wealthy and well-connected."

"We oppose the Senate's looting of America by big corporations," the Progressive Change Campaign Committee (PCCC) said in a statement. "Over and over, the American people are told there is 'no money'—for student debt relief, for Medicare for All, for a Green New Deal, to create millions of jobs and save our planet. And now, at the moment when the American people are most in need, our coffers are being looted by the wealthy and well-connected."

Embedded in the nearly 900 pages of legislative text—the product of negotiations between the leaders of both parties and Treasury Secretary Steve Mnuchin, a former Goldman Sachs executive—are provisions that would slash billions off the tax bills of retailers and restaurants, provide billions in loans to aerospace giant Boeing, and make large hotel owners eligible for small-business benefits.

But the largest—and, to progressives, most alarming—component of the Senate package is the $4.5 trillion bailout fund that the bill would place under the control of Trump's Treasury Department with almost no meaningful oversight.

"COVID-19 emergency spending bill: $250 billion for direct payments to Americans, $250 billion for expanded unemployment benefits, $4 trillion to bail out corporations," tweeted Judd Legum, author of the Popular Information newsletter. "Seems like the balance is off a bit."

While Democratic lawmakers touted restrictions on corporate bailout funds that they won in negotiations with the White House—such as a ban on stock buybacks and limits on executive compensation—the version of the bill that passed Wednesday includes language that analysts said would allow Mnuchin to simply waive those restrictions at his discretion.

"Jaw-dropping corruption," Public Citizen said in response to that section of the legislation.

Consumer advocacy group Allied Progress highlighted the waiver language and other striking provisions in an analysis of the bill (pdf) released Wednesday evening: 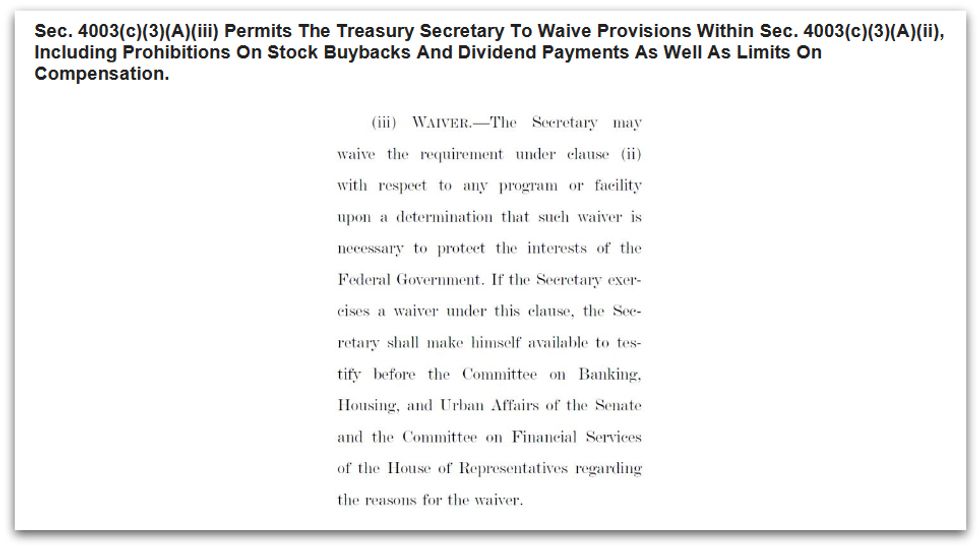 In a scathing assessment of the Senate legislation before it passed the chamber Wednesday, HuffPost senior reporter Zach Carter wrote that the bill "represents a transfer of wealth and power to the super rich from the rest of us, with the support of both political parties—a damning statement about the condition of American democracy."

"The new law would establish a $4.5 trillion corporate bailout fund overseen by Treasury Secretary Steve Mnuchin, with few substantive constraints," noted Carter. "Bailout money will flow to the shareholders of large corporations, otherwise known as rich people. The oversight terms that Democrats secured are purely cosmetic, replicating the toothless provisions of the 2008 bank bailout that enabled watchdogs to report abuse but not actually prevent or rectify it."

"The new law would establish a $4.5 trillion corporate bailout fund. Bailout money will flow to the shareholders of large corporations, otherwise known as rich people."

"But these horrors will only be realized if the House of Representatives approves this monstrosity," Carter added. "Democrats control the House. They can pass any bill they like and dare Senate Republicans and the president to oppose a serious bill for a serious problem. Or they can rubber-stamp the Senate bill and help Donald Trump foreclose on the next generation of American democracy."

Senate Republicans initially attempted to pass a version of the legislation that contained all the benefits for big business while denying direct cash payments to the poorest Americans, but that effort was twice rebuffed by Senate Democrats who demanded stronger protections for vulnerable people.

The final bill would provide a one-time $1,200 means-tested payment to people earning less than $75,000 a year and an additional $500 per child. The legislation would also significantly expand unemployment benefits for a period of four months, a provision that led a small group of Republican senators to temporarily revolt and threaten to delay the bill's passage.

People who don't have direct deposit information on file with the Internal Revenue service could face significant delays in receiving the $1,200 payment, Democratic aides warned:

Ultimately, critics said the bill's benefits for people struggling to cope with the massive coronavirus-induced economic fallout are nowhere near sufficient to match the scale of the crisis.

"Giving a one-time $1,200 check to some families and telling them 'good luck' is not going to cut it. It's like handing them a leaky bucket to deal with a flood," said Kyle Herrig, president of advocacy group Accountable.US. "And what about the millions of struggling borrowers who don't know how they'll pay their next private student loan bill or those who fall victim to predatory lenders during these desperate times?"

"Congress should immediately begin working on another stimulus that ensures the finances of working America are supported as strongly as the balance sheets of corporate America thanks to this package," Herrig added.