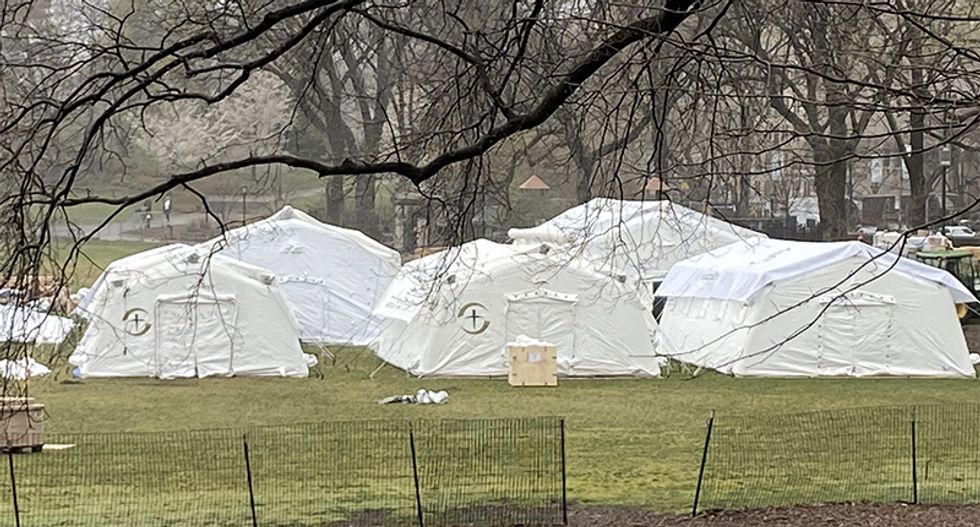 Residents of New York were shocked to look out their windows and see white tents going up in the north meadow of Central Park in New York on Sunday.

"Not sure if I find this more reassuring than terrifying," New York Times reporter Katie Rosman confessed on Twitter.

"We’re told patients will initially be coming from the Mount Sinai Health System. This buildout is apparently an exact replica of an emergency field hospital that Samaritan’s Purse opened on March 20 in northern Italy," New York One reported.

You can see the comments from people below:

The same group that set up an emergency pop-up hospital in Northern Italy is building one in Central Park, to be fu… https://t.co/8bEpX0sEDf
— Laura Bassett (@Laura Bassett) 1585511452.0

NYC is constructing a hospital in Central Park, close to 60K New Yorkers are infected, Florida is on the same traje… https://t.co/nrwUjhF2sK
— Danielle Moodie (@Danielle Moodie) 1585512770.0

The @SamaritansPurse Emergency Field Hospital is being set up in the East Meadow of Central Park today. We hope to… https://t.co/InNgQ4JLMg
— Franklin Graham (@Franklin Graham) 1585504804.0