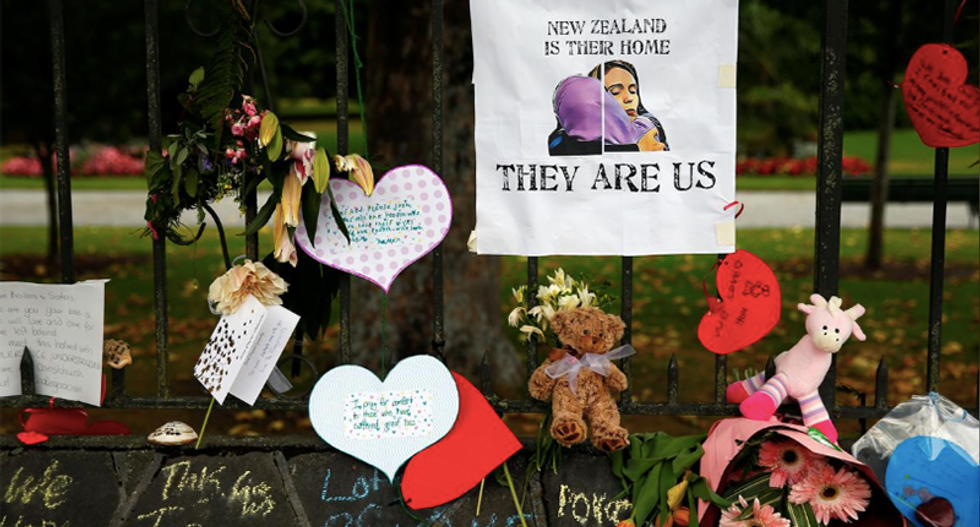 Flowers and signs are seen at a memorial site for victims of the mosque shootings, at the Botanic Gardens in Christchurch, New Zealand, March 18, 2019. REUTERS/Edgar Su

New Zealand police arrested a 19-year-old man over an "abhorrent" threat made this week against one of the Christchurch mosques targeted in a mass shooting last year.

As New Zealand prepares to mark the one-year anniversary of the massacre by a self-avowed white supremacist that killed 51 Muslim worshippers, police condemned the threat and increased patrols at two mosques that were attacked.

The intimidating message made on an encrypted messaging app reportedly showed a man in a balaclava sitting in a car outside the Al Noor mosque accompanied by threatening text and a gun emoji.

"This type of imagery has no place in Aotearoa New Zealand -- it is abhorrent and will not be tolerated," Canterbury police commander superintendent John Price said in a statement, referring to the country by both its Maori and English names.

He said the man, who has not been named, was arrested after police executed a search warrant at a Christchurch address and located several items, including a vehicle.

Price said the man had been charged on an unrelated matter, which was not disclosed, and police were still gathering evidence over the mosque threat.

He said police had also increased patrols around the Al Noor and Linwood mosques and would be maintaining "a visible presence" as the March 15 anniversary approaches.

"The safety of the community is our utmost priority," he said.

Price praised members of the public who reported the threatening image and warned against sharing it online.

He said the image had been referred to New Zealand's chief censor David Shanks to see if it should be classified as objectionable material, which would make sharing it a crime punishable by up to 14 years in jail.

Shanks last year outlawed video livestreamed on social media during the shooting and a Christchurch man who later shared it was jailed for six months.

The alleged mosque attacker Brenton Tarrant, an Australian national, is due to go on trial on June 2 facing terrorism charges plus 51 counts of murder and 40 of attempted murder over the killings.